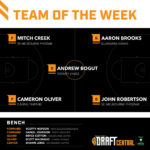 F0R the first time this year, eight National Basketball League (NBL) sides had a representative in our Draft Central NBL Team of the Week for Round 3 in the most even spread to-date. South East Melbourne Phoenix and Cairns Taipans both had two players each in the 10-player team after impressive wins, while all bar Brisbane Bullets – aka the remaining six sides – had a representative in the team. Now three rounds in, just two players remain having made the Team of the Week in every round thus far in Phoenix’s Mitch Creek and Perth Wildcats’ Bryce Cotton. With New Zealand only playing its first games over the weekend, Scotty Hopson has a chance to begin his own streak.

In the starting five, Creek had another outstanding game with 23 points, six rebounds, five assists and three steals, joined in the starting side by teammate, John Robertson (26 points, four rebounds and 10 assists). Cameron Oliver earned the other starting forward role thanks to 22 points, nine rebounds and two blocks, shooting at an elite 81.8 per cent from the field, joined in the side by teammate, Scott Machado. Illawarra Hawks might have suffered back-to-back defeats, but guard Aaron Brooks was sensational, averaging 27 points, three rebounds, 4.5 assists and 1.5 steals. Also in the starting team was Sydney Kings’ center Andrew Bogut who was monstrous across two wins for the Kings, racking up an average of 15.5 rebounds, three assists and three blocks to go with his 12 points from 64.3 per cent efficiency.

Looking to the bench, Cotton slots into the guard position having been the standout player for the Wildcats this weekend across two games, while Hopson also averaged 20 points, seven rebounds, two steals and 3.5 assists on a big debut weekend. Shawn Long slotted into the center bench position, which he could well have earned starting honours with a massive 19-point, 12-rebound, three-assist and two-block game, had it not been for Bogut’s antics over the weekend. Rounding out the bench is Adelaide 36ers’ Daniel Johnson who was named as a center last week, but due to the two star center players, would push into a forward spot and fill out the team after 18.5 points, nine rebounds and three assists.

Others who came into consideration and were unlucky not to squeeze into the side were Sydney Kings’ Casper Ware and Jae’Sean Tate, New Zealand’s Corey Webster, Melbourne’s Melo Trimble, Illawarra’s LaMelo Ball, Cairns’ Majok Deng, Perth’s Nick Kay and Brisbane’s Lamar Patterson. Both Patterson and Tate were in the first two Team of the Week’s and just missed out on making it three consecutive rounds.