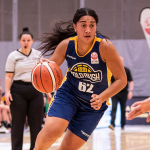 OTAGO Gold Rush are running hot in the New Zealand National Basketball League (NZNBL) 18IN18 competition, winning back-to-back games to level their condensed season at 2-2, whilst also handing reigning premiers Auckland Dream the same fate after downing them by 10 points last night. It was the third consecutive night with a 10-point differential between the sides, as Otago won 73-63 off the back of a dominant rebounding display.

Needing to start strong after their first loss a couple of nights ago, the Dream got off with the first basket to Amanda Wayment, and a triple to Sharne Robati. It would be Robati who scored seven of the first 11 points in the game, as Savanna Handevidt scored the only Gold Rush basket in the opening four minutes. The Dream were up 9-2 and looking hot from the get-go, but the next four points to Lisa Wallbutton settled the Gold Rush down.

Rionne Papa hit an an impressive hookshot with four minutes remaining in the term to extend the Dream’s lead out to five again, but back-to-back baskets – including a triple – from Otago’s Hannah Matahaere tied the scores. Olivia Berry put her side back in front, only for Tara Clement to hit a triple and regain the lead for the Gold Rush. From there, the Gold Rush managed to hold it for the rest of the term, as a second Clement triple in the final minute helped Otago lead 19-14 at the first break.

Straight out of the break it was Handevidt getting on the board and extending the Gold Rush’s lead out to seven, before Amanda Buck and Robati cut it to three in response. The teams traded baskets through Zoe Richards – who scored her first points of the night – and Wayment – though it was the red-hot Handevidt who hit the next five points and the Gold Rush raced to an eight-point lead with four minutes to play in the half.

A triple from Berry gave her side some hope, though both teams continually missed shots in the final few minutes of the second term. In fact it was just Jelena Vucinic with three free throws either side of the Berry basket that eventually counted, and the Dream were back within two points at half-time and it was game on.

Eight seconds into the third quarter and Bronwyn Kjestrup was on the board from a quick-fire jumper, followed by a Handevidt basket. Arielle Williams-Mackey had not been a factor in the first half, but she was quick on her long-range bomb to cut the deficit back to three within 90 seconds of the quarter. The Gold Rush seemed to do it the hard way with four points in the next couple of minutes, only for Casyn Buchman to land a three-pointer 20 seconds later and the seven-point lead was cut to four.

It was back to just one with another Williams-Mackey triple, though Matahaere responded in time as the term ticked past the midway point. It was not until the six-and-a-half-minute mark when the Dream hit the front following a third Williams-Mackey triple, and another Berry basket. Once again it was Clement who nailed a long-range attempt of her own to regain the Gold Rush the lead, though no sooner had she done that and Wayment had put the Dream back in front. It was a see-sawing contest to the end of the term, with the Dream in front with 1:45 on the clock, but the last six points of the quarter went to the Gold Rush to retake the lead by four at the final change.

Whilst many expected the Dream to come out firing in the last term, it was the Gold Rush that piled on the pressure early thanks to baskets from Kjestrup and Te Araroa Sopoaga, and the lead was out to nine. Robati, Williams-Mackey and Berry all struck back to continue their scoring run and reduce the deficit to three with 6:25 on the clock, though Richards hit back-to-back baskets through a layup and then jumper for the Gold Rush to be seven up with five minutes to play.

Katelin Noyer scored a crucial triple for the trailing side to get back within four points but each time the Dream got closer, the Gold Rush pulled away. They scored seven of the next eight points to go out to a 10-point lead and were never headed from there. Though the final two minutes from a frantic one, with the scores going from 66-56 to 73-63, as the Gold Rush maintained the rage and got up in a great performance to keep their semi-finals hopes alive and put doubt in Auckland’s chances.

Otago Gold Rush dominated the rebound count 56-39, whilst also capitalising on the second chance points (18-13) and having more points off the bench (25-20). Turnovers did hurt the winning side however, clocking up 24-18 which allowed the Dream to score off those turnovers, with just under half their score (28 points) come from Gold Rush turnovers. The assists were level and the Dream led the fast break points (13-11) and steals (11-9).

Handevidt scored at 60 per cent from the field, hitting six of 10 for 15 points, as well as nine rebounds – five offensive – and three steals. Teaming up well was Sopoaga who ended her night with 19 points, and had contribution off the boards with six rebounds and also seven assists in a starring role. Richards picked up 14 rebounds to go with her nine points, while Clement’s three triples totalled her entire nine points, as well as four rebounds and two steals, as Wallbutton (eight points, 10 rebounds) came close to a double-double.

For the Dream, Robati led all-comers with 15 points, as well as eight rebounds and two assists, while Williams-Mackey managed 13 points despite hitting just four of 20 from the field – all of which were long-range bombs. Buchman had seven points, six rebounds, three assists and two steals in an all-round game, while Wayment picked up six points, 10 rebounds, three assists and two blocks. Off the bench Berry had 10 points and two steals.

Just four matches remain in the NZNZBL 18IN18 competition, with the Dream taking on the undefeated Harbour Breeze tomorrow night to try and remain in the semi-final hunt, while the Gold Rush lock horns with Canterbury Wildcats on Thursday in the final night of the condensed regular season.