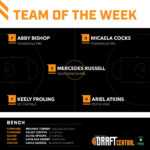 REIGNING premiers, University of Canberra (UC) Capitals were back on the board in a big way, both with an important win over Sydney Uni Flames, and in our Women’s National Basketball League (WNBL) Team of the Week for Round 4. The Capitals had three players named in our 10-player team, one more than Perth Lynx and Townsville Fire, who surprisingly played each other in a tight game. Southside Flyers, Melbourne Boomers and Adelaide Lightning all had a player in the team to round it out, with Bendigo Spirit and Sydney Uni missing out this week.

Townsville picked up its first win of the season and had an impressive two players in the starting line-up. Abby Bishop had a dominant performance with a round-high 31 points, as well as 11 rebounds, four assists and two steals in one of the performances of the weekend. She was joined in the starting side by captain Micaela Cocks, who picked up 22 points, five rebounds, five assists and three steals in the Fire’s win over Perth Lynx. A Lynx debutant was named in the other starting five guard spot beside Cocks, with American import, Ariel Atkins shooting 19 points and compiling seven rebounds and four assists in a big performance to tip-off her WNBL career. She was joined in the overall Team of the Week by teammate, Katie-Rae Ebzery.

Another American import who has had an amazing season so far is Mercedes Russell, with the Southside Flyers’ center having another couple of big games. Russell posted 15.5 points, 13.0 rebounds, 3.5 assists, 2.0 blocks and 1.5 steals, while shooting at 73.7 per cent from the field. Rounding out the starting five is UC Capitals’ Keely Froling who was named second forward in back-to-back weeks. She had 19 points, seven rebounds, three assists, two blocks and one steal in the Capitals’ win over the Flames, but was far from the sole contributor, joined in the side by teammates Olivia Epoupa and Kelsey Griffin who make up two of the five bench players. Adelaide’s Brianna Turner and Melbourne’s Cayla George fill out the final two spots in the 10-player squad.

Others who were unlucky to miss out on a spot include Bendigo’s Rebecca Tobin and Kelly Wilson, Southside’s Rebecca Cole and Sara Blicavs, Adelaide’s Stephanie Talbot, Townsville’s Tess Madgen and Sydney Uni’s Alice Kunek.