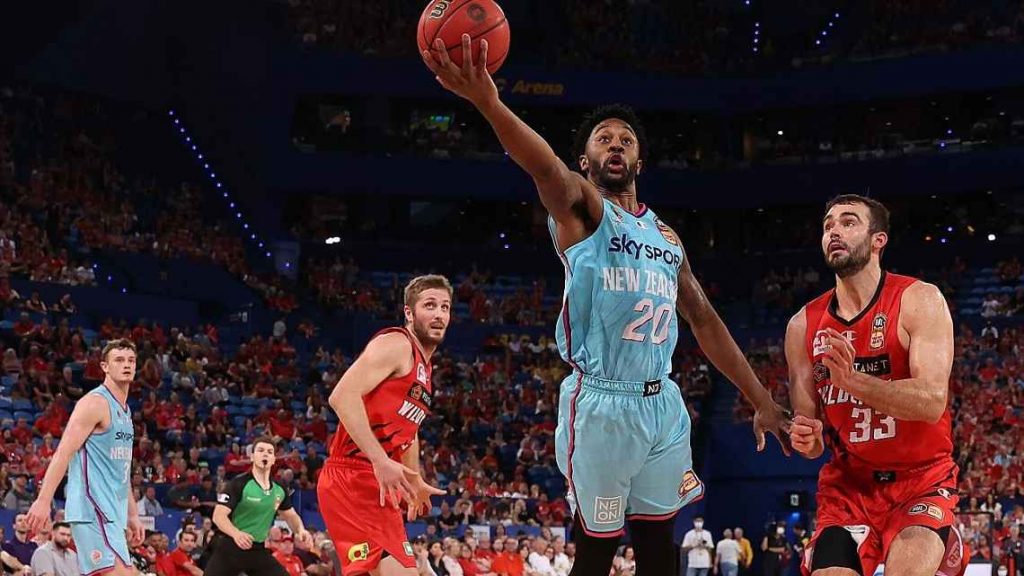 TUESDAY night’s heartbreak for the New Zealand Breakers was eased with an 83-78 win over the Perth Wildcats on Sunday. Bryce Cotton‘s heroic effort led Perth to an unlikely overtime win in Launceston on Tuesday, but the Breakers got their revenge, courtesy of a huge Levi Randolph performance. The Breakers trailed by as much as 13 points, but the team showed heart, and some impressive work on both ends of the floor saw them pull off a tough come from behind victory.

The game started in slow fashion, with both sides combining for four points in the first two minutes as the struggled to find their offensive rhythm. As the quarter progressed, players such as Tom Abercrombie and Todd Blanchfield began to get involved in the game. With the Wildcats taking only a two-point lead into the first break, the game was shaping as a thriller and the second quarter continued this trend. Both teams found themselves in foul trouble throughout the first half, with plenty of trips to the free throw line. Perth’s lead would grow by one by the end of the quarter to take a three-point advantage into half time in a very entertaining duel.

The third quarter could not have started any better for the Wildcats, who were looking to regain top spot on the ladder from Melbourne United with a win. Perth’s slick shooting saw them take a 13-point lead early in the term, led by some remarkable offence from Blanchfield and Jesse Wagstaff, who combined for 10 points in the first four minutes. The Breakers had their backs against the wall, with the lead threatening to get even bigger as they struggled to find anything positive on the offensive end. Enter US import Randolph. Randolph was the key catalyst for the turnaround, providing plenty of scoring off the bench. The Wildcats had no answer for his midrange game, as the 28-year-old proved deadly, pulling up with ease as New Zealand ended the quarter on a 24-6 run to remarkably take a five-point team into the final break. The last quarter saw the Wildcats fight back to draw level in the first minute of the game, thanks to a Cotton corner three. The fourth quarter remained back and forth for the majority, but with the Breakers holding a three-point advantage with 20 seconds remaining, an Abercrombie steal and layup sealed the deal.

As mentioned, Randolph was the star of the match, finishing with 22 points on an efficient 11 of 16 from the field. He was crucial when his side was in danger of a blowout, constantly losing defenders and inspiring teammates to do the same. He had some nice help from Abercrombie (14 points), Corey Webster (14 points and seven rebounds), Finn Delany (13 points, seven rebounds and five assists) and Colton Iverson (11 points and 17 rebounds). For Perth, Cotton continued to battle shooting struggles as he finished with 12 points on 4/17 from the field, but used his passing skills to get teammates in ideal positions and end with nine assists. John Mooney was terrific, pouring in 22 points and seven rebounds on 90 percent shooting. He battled well against Randolph and tried his hardest to conjure a win. Blanchfield performed well all game to finish with 19 points of his own.

The result saw United hold onto top spot for the round, as the Wildcats slipped to second with the NBL finals approaching. Perth have the chance to regain the top spot against the Bullets on Friday, while the Breakers will also play on Friday, facing off against the Taipans in Launceston.