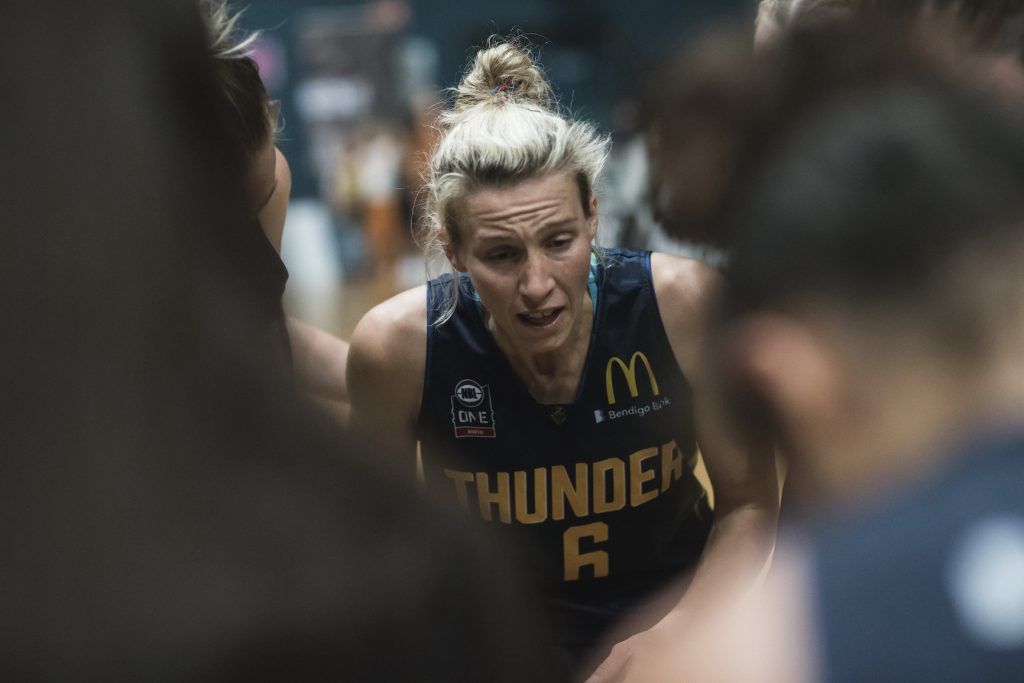 THE two powerhouses of the National Basketball League (NBL)1 North women’s division have reached the grand final, with the Southern Districts Spartans and Logan Thunder winning their respective semi-finals on the weekend. The Spartans toppled the Mackay Meteorettes, while the Thunder accounted for the Townsville Flames, to book a tantalising best-of-three grand final series starting Friday night, having only dropped one out of 28 games between them.

Minor premiers Southern Districts Spartans booked their spot in the big dance with an 18-point win over Mackay Meteorettes. The undefeated Spartans put the pressure on the visitors early in their clash to win the opening term 25-19. The Meteorettes completely turned it around in the second quarter though, piling on 21 points to 14 to take the lead by one at half-time. The second half belonged to the Spartans who put up 48 points to 29 – including a 23-11 third stanza – to run away with the 87-69 win.

Chelsea Brook matched Rocci’s output despite being in a losing side, notching up 29 points – five of 10 from long-range – as well as three rebounds, three steals and two assists. Cayla George finished with a massive double-double of 19 points and 15 rebounds – all coming on the defensive end – and pinpointing seven assists. Skye Rees (nine points, five rebounds and two assists) and Sara Storeshaw (nine points, three assists two rebounds and two steals) were other contributing scorers in defeat.

A startling first term set the wheels in motion for Logan Thunder to reach the 2021 NBL1 North Women’s Division Grand Final, after defeating Townsville Flames by 13 points at home. The Thunder came in as favourites and completely blitzed the Flames in the first term, restricting the visitors to just three points, as they piled on 19 to lead by 16 at the first break. The Flames managed to keep that margin the same over the next two quarters, but just ran out of time, scoring 22-19 in the last term to go down, 55-68.

The Flames were more efficient (41.5 to 39.7 per cent) from the field, but had 10 less chances, and struggled with offensive possessions, producing just six assists on the night, for the Thunder’s 18. The winners also had nine more steals (14-5) and 11 less turnovers (12-23), with the difference in ball-handling being the key in the win.

Mikaela Ruef scored a match-high 21 points on her way to an impressive double-double, also collecting 11 rebounds – eight defensive – and two steals. Chevannah Paalvast was the other key scorer for the winners, notching up 19 points, seven rebounds and three assists in the win. Ashley Taia (11 points, three assists and two rebounds) also managed double-figure points, with Mikaela Cann‘s eight assists more than the entire Townsville side. She also had 10 points and five steals of her own.

Micaela Cocks lead the way for the Flames, recording a team-high 19 points, as well as three rebounds and two assists. Steph Reid was the only other major scorer with 16 points, five rebounds, three assists and two steals. Mia Murray (three points, 10 rebounds) provided the support off the boards, while Aliza Fabbro (seven points) was the next highest scorer in the loss.

Now the Thunder lock horns with the Spartans at the ladder’s home stadium of Rowland Cowan Stadium, tipping off on Friday night from 6:30pm local time, following by clashes at 5:00pm on Saturday and 3:00pm on Sunday.