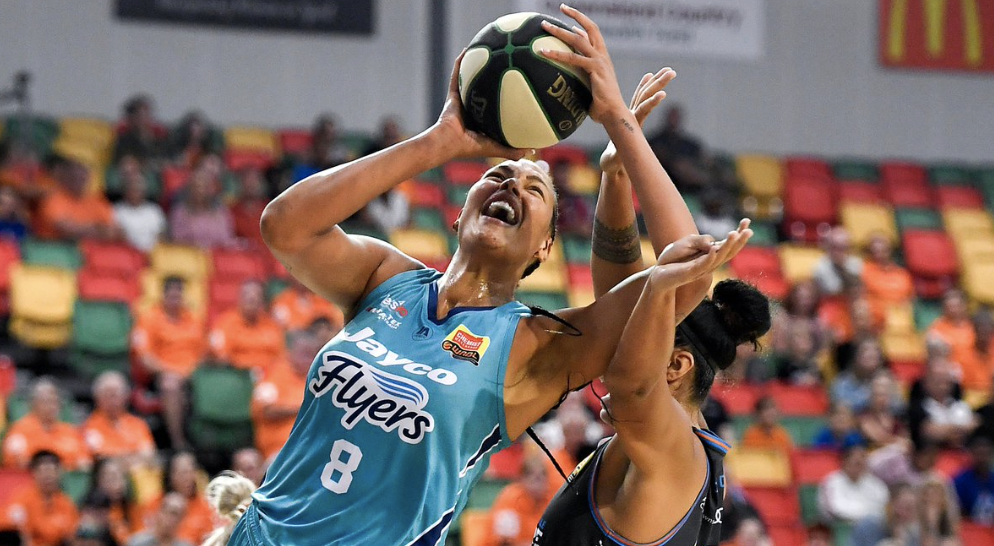 IN the WNBL’s new postseason format, the Southside Flyers have earned the first spot in the Grand Final series after a well-fought win against an extraordinarily resilient Townsville Fire squad, taking the contest 106-93. As a result, the Fire compete again in a day’s time against the Melbourne Boomers who eliminated the Canberra Capitals in yesterday’s opening meeting thanks to their second chance seeding.

If you thought the Flyers were going to get off to a hot start, that would be an understatement, as Southside made their opening 10 field goal attempts in front of a raucous Townsville crowd. More surprisingly, however, was that the Fire trailed by just a couple of possessions.

But proficient scoring got better for Southside, knocking down three consecutive threes, stringing together a 14-2 run to finish the side’s 41-point opening quarter and putting themselves ahead of Townsville by 16 in what was perhaps one of the best 10-minute stretches of play in WNBL history. In addition, both Leilani Mitchell and Bec Cole accumulated 11 and 10 points respectively in that time.

Kate Gaze commenced the second quarter with a triple for the Fire, hoping to put a spark in her team’s mindset early on, but who else other than Cole to answer back with a three of her own, immediately shifting momentum back to Southside.

While Townsville did a decent job of slowing Southside’s roll, the task of reducing their deficit was proving to be an even tougher task. Funnily enough though, Townsville showed some real persistence concocting a 13-2 run in the closing stages of the first half and reducing the distance to single figures. Winning the second quarter 27 to 19, Townsville’s impressive spurt before the main break provided the home crowd with some hope at a pivotal point in the meeting.

Back to the Flyers, they had three players over 10 points with Cole and Mitchell leading in scoring with 15 points apiece, whereas Liz Cambage collected her eleventh point shortly before the midway point of the contest. Meanwhile, youngster Shyla Heal (15 points and four assists) was carrying her side’s fightback next to MVP nominee Lauren Nicholson (13 points and five assists) with Townsville holding the swing of the game at half time.

A slower brand of basketball briefly came to the fore in the third, but scoring eventually picked up in the second half. Controlling the play and tempo of the game helped Cheryl Chambers and her team put a double-digit distance between the two opponents once again. However, a Heal buzzer-beater to end the third signalled a pulse in the Fire roster, down 74-86 with a quarter to go.

Townsville showed tremendous resilience against the Flyers all the way through the fourth quarter, but Shannon Seebohm’s unit just could not climb the mountain, getting to within seven points of Southside. But the minor premiers walked away 13-point winners in the end putting up an enormous 106-point total.

Managing a 52 per cent conversion rate, it was Southside’s game to lose and it just was not the Fire’s night on the whole. While Townsville shot the ball more efficiently than their opponents, the Flyers topped the Fire in almost every other category.

Following a massive second half, Cambage ended the night as the game-high scorer with 31 points and 18 rebounds in what was a mammoth effort against the center-combo of Megan McKay and Zitina Aokuso. Additionally, Cole accumulated a massive 22 points in under 28 minutes of play, whereas Mitchell (19 points and 10 assists) and Aimie Clydesdale (12 points and six assists) each put up valuable totals.

For the second year in the row Southside will suit up in the WNBL’s season-decider on Sunday afternoon, looking to redeem themselves after last season’s season sweep against the Capitals. They await the winner of Friday night’s preliminary final between the Fire and the Boomers with an extended period of rest to their advantage.