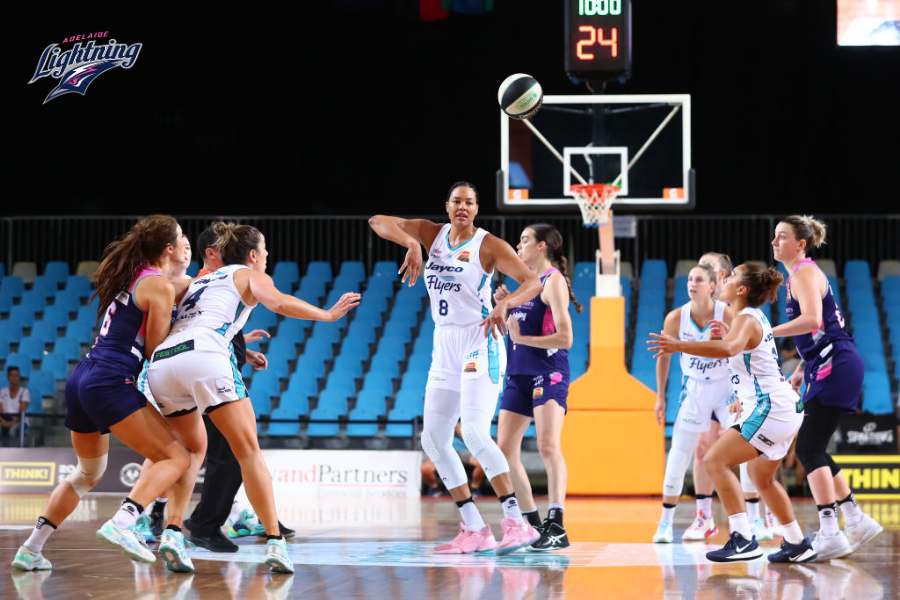 SOUTHSIDE Flyers once again flexed their muscles showcasing their array of talent and bench depth to notch up another convincing win, downing Adelaide Lightning by 31 points in a strong showing (110-79). It is fair to say that once Southside get going there is no stopping them, able to burst out of the blocks and share the scoring around credit to their impressive skillset and incredible number of options to go to the net.

It was not all one-way traffic however, with Adelaide holding the lead at quarter time albeit by three points, proving they too have the fire power to mix it with the best. But a second quarter shooting masterclass put a dampener on that with Southside piling on a whopping 30 points to 17 to not only claim the lead but so to the ascendancy heading into the second half. The Flyers continued that vein of form, outscoring their opponents in the third and fourth quarters to secure their seventh win of the season and claim second spot on the ladder heading into Round 4.

Adelaide had their chances but simply could not convert going at 43 per cent from the field, only nailing 29 goals from 66 attempts. On the other hand, Southside found their rhythm shooting at 50 per cent from the field with their free throw accuracy doing the real damage converting 10 of 12 attempts at 83 per cent. The Lightning proved to be strong off the boards (40-38) while also leading the way for blocks (6-5) but that is where it stopped for Adelaide with the Flyers exploiting them on the assists front (32-24). Southside starred with their clean hands and ability to read the play racking up 12 steals to three while on the turnover front they only recorded a mere six as opposed to Adelaide’s 17.

Liz Cambage once again dominated highlighting her basketball prowess to knock back 25 points while also reeling in seven rebounds. In her 26 minutes on court Sara Blicavs impressed collecting 21 points, five rebounds and four assists while Jenna O’Hea was another key contributor for the Flyers draining 15 points, three rebounds and six assists. Aimie Clydesdale was the only other player to reach double digits for points with 12 to her name along with four assists. Leilani Mitchell was down on her usual output recording nine points but still managed to reel in 10 assists and two steals. Monique Conti also plied her trade picking up eight points, four rebounds and four assists highlighting just how many scoring options the Flyers had.

Although they did not get the job done there were a couple of key contributors for Lightning who stepped up to the plate with Abigail Wehrung leading the way with 21 points, one rebound and two assists. The next best was Marena Whittle who managed 15 points in her 30 minutes on court. Whittle also recorded nine rebounds five of which were offensive along with three assists while Brooke Basham knocked back 13 points, four rebounds and two assists going at 100 per cent from three point range. Louella Tomlinson popped up for nine points, four rebounds and four assists as Steph Talbot only managed six rebounds, four assists and seven assists.

With a win under their belt the Flyers will be hoping to repeat their efforts against the Lightning when they meet again on Wednesday at Cairns Pop-Up Arena.

Fire overcome half time deficit to notch up sixth win

Townsville Fire got the job done against Sydney Uni Flames limiting them to 14 points in the second half and claiming a 14 point win (73-59). It was an even start to the game with only one point separating the two sides at quarter time before Sydney really started to find their groove in the second quarter to establish a handy lead. However, the tables quickly turned in the second half with Townsville coming out with a real pep in their step blocking every avenue to the rim for the Flames while proving to be a threat up forward going on a scoring spree and stunning Sydney.

Holding the ascendancy at half time Sydney Uni simply could not maintain that same level of intensity, dropping off as the game went on while on the other hand Townsville exploited each opportunity that came their way to impact on the scoreboard and reduced their opposition’s chances of getting any real momentum. Townsville came out with a fire in the belly determined to override their slower start to the game and secure their sixth win of the season and hold onto that third spot on the ladder.

Overall shooting percentage was a real issue for both sides with neither able to hit the 50 per cent or above mark with points proving to be hard to come by for large chunks of time. Sydney sat at a lowly 32 per cent from the field showcasing just how inaccurate they were only nailing 23 of their 71 attempts and while Townsville were not much better ay 42 per cent it did prove to be the difference. Free throw shooting seemed to be the strength of the Flames converting at 71 per cent as opposed to the Fire’s 33 per cent while points in the paint is where the victors felt most comfortable sinking 30 of their points from there. it was a high rebounding game with the Flames getting the nod thanks to their 53 in comparison to the Fire’s 40 but the tables were reversed when it came to assists and steals as Townsville reigned supreme in those two areas (20-9) and (11-5) respectively. Turnovers also proved to be a killer for Sydney Uni who were wasteful with ball in hand recording 16, seven more than their opponents.

In terms of performances it is hard to go past Lauren Scherf who had a day out just falling short of a double-double before half time but quickly hit the milestone after the break. The center was involved in just about everything recording a team-high 18 points along with a staggering 19 rebounds, 13 of which were defensive showcasing her sheer presence on the court despite the loss. Scherf also managed an impressive four blocks to round out a stats-stuffing performance. She was well aided by the likes of Lauren Mansfield who played the entire 40 minutes and managed 16 points, two rebounds, three assists and two steals while Alison Schwagmeyer also found her range with 14 points, five rebounds and five assists.

For the Fire it was the next generation of youngsters that stepped up to the plate and led the way with their drive to the basket, confidence and shooting radar well and truly on. Zitina Aokuso topped the table for Townsville draining 16 points and walking away with a double-double thanks to her 10 rebounds. Shyla Heal was not far behind amassing 15 points, five rebounds and six assists showcasing her ability to be a real playmaker for her side while also boasting the confidence to get the job done herself. The ever-experienced Lauren Nicholson played an integral role in the win finishing with 14 points and three steals as did Nadeen Payne who slotted seven points, eight rebounds and three assists.

Sydney Uni Flames will be hoping to pick themselves up and rally for their clash against the Melbourne Boomers while Townsville have plenty of time to prepare for their meeting against the struggling Perth Lynx side.