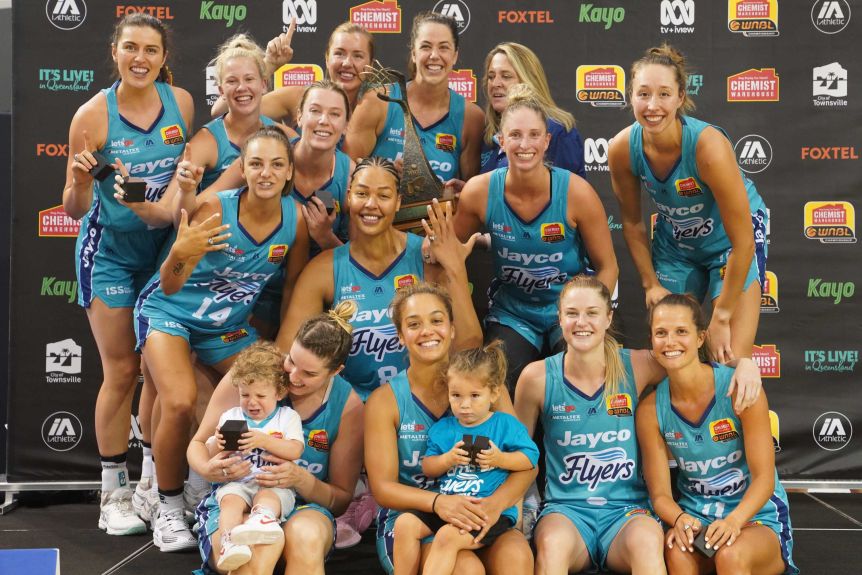 SOUTHSIDE Flyers have notched up their inaugural premiership since being rebranded with a 17-point victory over Townsville Fire on Sunday afternoon (99-82). After taking out the minor premiership it was only fitting that the Flyers also walked away with the final piece of the puzzle – a premiership ring – after a dominant 2020 WNBL season. Despite not walking away with the chocolates, the Fire will hold their heads high, pushing the Flyers all the way and enjoying a rapid rise up the ladder throughout the condensed season.

Having met only days before it was always going to be a tough battle and the first quarter was proof of that with neither side able to be separated at the first break sitting at 22 points apiece. Play commenced with none other than Liz Cambage out of the middle however it was Townsville Fire’s Lauren Nicholson that landed the first blow nailing a layup. It was not long before Sara Blicavs made her presence felt converting at the charity strip and evening things up early in the piece.

The Fire pushed out to as much as six points ahead in the first five minutes before the Flyers found their groove and Cambage was subbed out due to foul trouble in the opening few minutes. Rebecca Cole levelled the scores with just over six minutes of play left in the term showcasing just how much of a tight game the fans were in for. This back and forth nature continued for most of the term with both sides trading blows and unable to arrest any sort of momentum given the high pressure nature the game was being played under. Nicholson was playing her part for the Fire leading the charge both off the boards and on the scoreboard while Leilani Mitchell sensed the occasion and stepped up to the plate with a couple of consecutive jump shots.

With scores tied at the first break the Flyers steadily built ahead in the second term opening up a two point lead off the back of some Mitchell magic. The Southside Flyers representative seemed to have her own ball out there, displaying her impressive range and relative accuracy. The term started with Zitina Aokuso hitting a jump shot and stealing the lead for the Fire before Mia Murray also got involved in the action to extend the lead to four points.

But that did not last long with Mitchell and Cole chiming in and playing their part for the Flyers. The lead ebbed and flowed as the Flyers created a handy four point buffer before Townsville once again fought back to reduce the deficit and steal the lead. It was a high intensity term with no player able to catch their breath with  Jenna O’Hea impressing and nailing a triple before Blicavs also added her two cents worth to the tally. Nicholson continued her dominant ways while Stephanie Reid also got busy with a jump shot to get her side back within touching distance.

Two points separated the sides at half-time but it was clear that the Flyers came to play in the third quarter really putting the foot down. Known as the premiership quarter Cambage started to inflict some serious pain with a couple of much needed baskets while Blicavs proved to be a handful. If it was not Cambage attacking the rim it was Mitchell with the two causing chaos and finding the basket with relative ease to keep the scoreboard ticking over and the Fire at bay.

Townsville went three minutes without a score such was the defensive pressure of the Flyers while they managed to slot six points of their own and extend the margin to eight points. Shyla Heal started to get involved in the action nailing a handy jump shot while Aokuso also found the basket moments later but the pattern had started to become clear with the Fire unable to keep up with the steam train that was Southside.

With the silverware in sight it was clear that the Flyers were not about to let go, coming out with a higher level of intensity and real sense of determination. The Fire threw everything they had at the Flyers with Nicholson and Heal combining to cut the margin to nine and cause a couple of scares but that was short lived as the minor premiers held their nerve. Rachel Jarry was in good form and that showed making the most of her free-throws while Mitchell continued to star. Cole had a day out in the final term of play nailing a triple and relishing the opportunity to go to the line while Townsville simply did not have enough firepower to compete.

It is no surprise Mitchell walked away with Player of the Match honours with 31 points, four rebounds and five assists in an impressive showing for the Flyers. Cole also impressed throughout the game with 22 points shooting at 70 per cent from the field while also accumulating three assists, five steals and two rebounds. Cambage was quiet but still had an impact collecting 14 points, five rebounds while Blicavs managed seven points , nine rebounds and three assists.

Nicholson was once again they go to player for the Fire walking away with 20 points, seven rebounds and four assists while Payne also had an impact with 14 points, six rebounds and two assists. Heal was down on her usual output but still managed 11 points and seven rebounds.