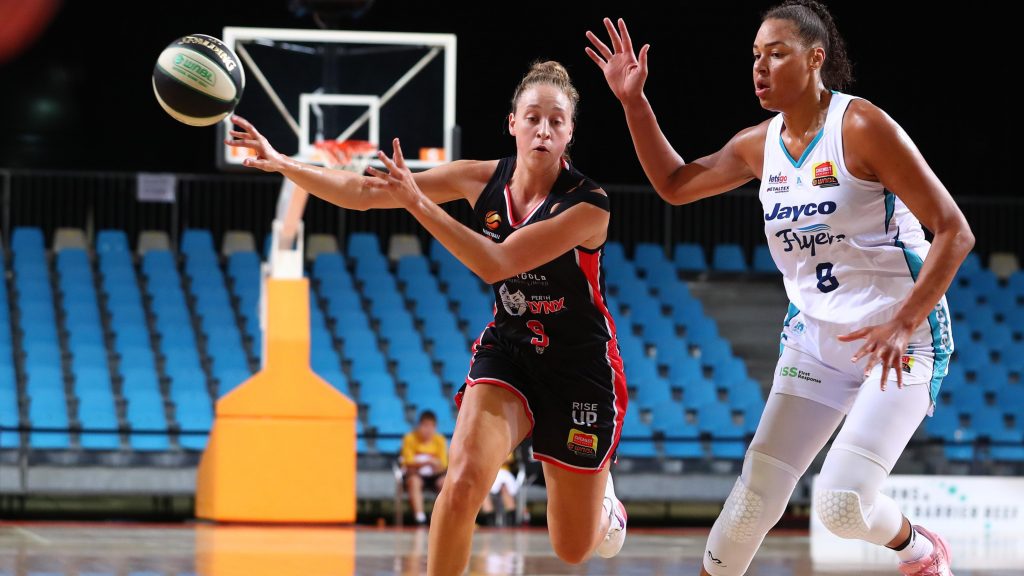 SOUTHSIDE made light work of Perth Lynx claiming a convincing 40 point victory over the bottom two side (102-62). Lynx simply could not compete with the star power of the Flyers, blown out of the water from the opening term where Southside piled on 27 points to 17. The Flyers won every term by a decent margin, showcasing their ability to put their foot down and star with their ball movement, attack and overall class.

Despite Perth edging out to an early five point lead in the first quarter the Flyers flexed their muscles as the quarter went on shutting down their opposition and using their own weapons to full effect. Boasting plenty of x-factor Southside rallied to steal the lead and subsequently swing the momentum in their favour – which from that moment on, never left.

The Flyers led in every significant area shooting at a 62 per cent clip from two-point range while also highlighting their skill from downtown going at 41 per cent, nailing 12 of 29 attempts, compared to Perth who struggled to find their rhythm sitting at 26 per cent. When it came to rebounds the Flyers just pipped Lynx at the post (40-38) while they also dominated assists showcasing their willingness to dish the ball off and share it around, more than doubling their opponents (26-12). Turnovers were another main focal point and an area Perth would not be overly happy to lead in, amassing 27 while the Flyers treasured the ball only recording 12.

It is no surprise that superstar Liz Cambage led the way for Southside recording a game-high 23 points for her efforts while shooting at an overall field goal percentage of 56 per cent. Cambage also managed to ply her trade off the backboards picking up eight rebounds, six of which were defensive while also registering a block. Leilani Mitchell was not far off Cambage with the guard putting up shots from everywhere and most importantly converting at a 77 per cent rate. She walked away with 20 points to her name along with two rebounds, one assist and a steal. The ever-reliable Jenna O’Hea once again stepped up to the plate in her 21 minutes on court sinking 10 points to fill out an already impressive stats sheet of three rebounds, five assists, two steals and a block. The only other player to reach double digits for points was Sara Blicavs who recorded 20 points and seven rebounds. In a clear testament to their bench depth Monique Conti managed nine points while teammate Aimie Clydesdale also chimed in with a handy seven points of her own.

Although the Lynx could not get the job done, a couple of key players proved their worth and impact with Alexandra Sharp starring with her 17 points and five rebounds. The next closest was captain Katie Ebzery who was well and truly down on her lofty standards only managing nine points, four rebounds and four assists. It could have been a big evening for the captain if she had been more accurate shooting at a 37 per cent clip and only nailing one of her five attempts from beyond the arc. Jessie Edwards made her presence felt in her 23 minutes on court knocking back eight points and seven rebounds. She was well aided by the likes of Emma Clarke who slotted seven points and three rebounds while Ashleigh Isenbarger also chipped in with a handy eight points, six rebounds and two assists.

Unfortunately for Lynx the job does not get any easier faced with the UC Capitals tonight who are on a five game winning streak, while Southside will be gearing up for an enthralling clash with Townsville Fire who have been in ripping form the past couple of outings.

Lightning hold off gallant Spirit side

It was a nail-biting encounter from the opening jump ball with Bendigo Spirit throwing everything they had at Adelaide Lightning only to fall agonisingly short of their first win for the 2020 season (83-89). The class and execution of Adelaide came to fruition, able to withstand the pressure and come out the other side to record their third win of the condensed season.

The lead ebbed and flowed throughout the match with Bendigo claiming the ascendancy heading into the half time break and it looked like it could continue that way with Tessa Lavey dictating the play and opening up a seven point lead midway through the third. But the Lightning struck back with some clever play to outscore the Spirit in the second half 47 to 40. Bendigo seemed to tire as the game went on and were unable to go with Adelaide who kicked it up a gear and could sense a win in the making.

Adelaide had the upper hand when it came to overall field goal percentage going at 44 per cent compared to Bendigo who only converted at 33 per cent. However when it came to three point shooting, Bendigo convert4e 14 of 34 attempts at 41 per cent as Adelaide only managed a 33 per cent clip nailing nine of their 27 attempts. On the rebounding front the Spirit also seemed to have the upper hand reeling in 47 compared to 44. Assists were relatively even with only one splitting the two sides, 18 to 19, while when it came to steals the Lightning showcased their defensive mindset picking up seven opposed to the Spirit’s four.

Despite the loss Carly Ernst was a key figure in the Bendigo outfit, knocking back 22 points, however she shot at a lowly 33 per cent – something she would be hoping to improve on for future games. She also managed a double-double thanks to her eleven rebounds, ten of which were defensive, while also accumulating two assists. It is fair to say that Lavey stole the show starring in her 40 minutes out on court and managing 33 points, nailing four of six shots from three-point range at 66 per cent while also recording three rebounds and six assists. Outside of the aforementioned duo, Demi Skinner was the only other main contributor slotting 17 points in her 21 minutes on court while also amassing three rebounds and one assist in her sides loss.

For the Lightning it is no surprise that Steph Talbot was once again one of the best on court recording 22 points, 12 rebounds (nine defensive) and five assists to cap off an important win. Talbot was impressive from the field  going at 63 per cent but it was Alex Wilson that topped the table for Adelaide recording 23 points, six rebounds and six assists to really push her side over the line. Abigail Wehrung also chimed in with a handy 15 points in her 28 and a half minutes on court showcasing her ability to stand up under pressure and deliver. Marena Whittle plied her trade off the boards collecting eight rebounds to accompany her eight points while the only other player to make a real splash was Louella Tomlinson who slotted eight points.

Lightning are set to come up against Sydney Uni Flames on Saturday while the winless Bendigo have UC Capital next.