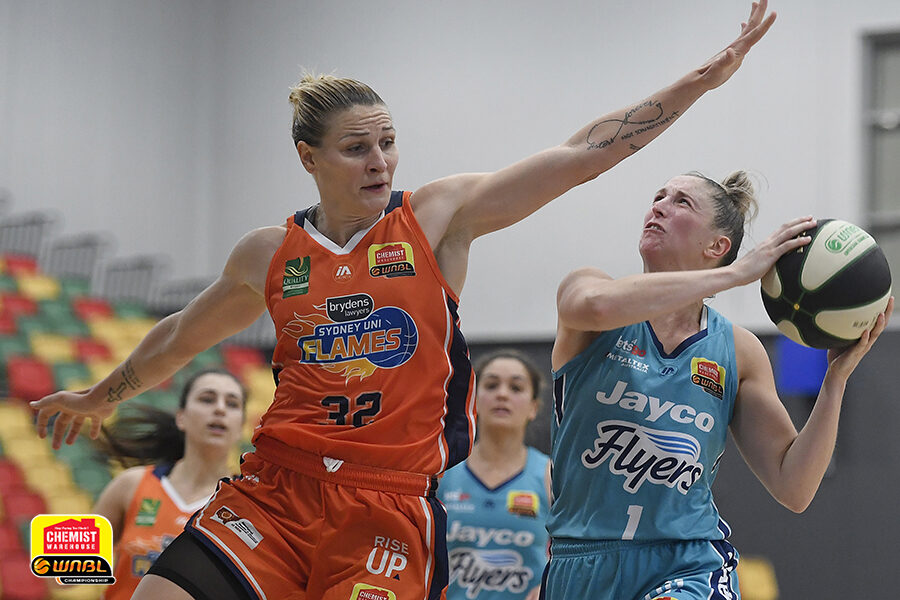 IT was a blockbuster Sunday of WNBL action as Southside Flyers, Adelaide Lightning and reigning premiers UC Capitals walked away with wins in their respective clashes to close out the opening round of action.

Coming up against a star-studded line-up it was always going to be a challenge for the Flames to compete and the Flyers proved why they are primed as clear title favourites running away with a 27-point victory (99-72). Playing their second game in as little as 24 hours the Flyers rediscovered their form after a surprise loss to run rampant against Sydney Uni, who despite throwing everything at them could not compete.

Southside led from the opening quarter and kept their foot on the pedal throughout the game to steadily build on the lead. The Flames had solid moments but the Flyers showcased their talent and endurance in the last term to put the afterburners on, nailing 27 points to 13 to notch up another convincing win. Statistically speaking the victors led in most aspects sitting at 48.6 per cent goal field percentage compared to the Flames’ 38.2 per cent while their accuracy from three-point range was also telling, all but doubling Sydney’s conversion rate of 21.4 to shoot at 44.4 per cent. The Flames were strong on the rebound outmuscling their opponents on the offensive rebounds with 23-14 while the ability of the bench players to come on and have an influence was crucial in keeping the scoreboard ticking over as the Flames notched up 33 compared to 25.

Rebecca Cole proved to have a hot hand for Southside, recording a game high 27 points in a strong showing for the seasoned campaigner. Cole also managed three assists and three rebounds in her 27 minutes on court. Teammate Jenna O’Hea was the next closest when it came to points scoring walking away with 19 for the afternoon along with seven rebounds and eight assists. Sara Blicavs also plied her trade across the court registering 14 points and eight rebounds. Given the tight turnaround superstar Liz Cambage only managed eight and a half minutes but while on court she made her presence felt dropping six points and dragging down two rebounds.

For the Flames, Natalie Burton led the way knocking back 12 points along with four rebounds. She was well aided by up and coming youngster Funda Nakkasolgu who slotted nine points for the match and also managed an assists and rebound. New comerto the squad Alison Schwagmeyer hit the scoreboard with nine points while also showcasing her all round class to collect five assists and six rebounds while Lauren Mansfield also put in the hard yards with nine points, eight assists and five rebounds to fall just short of a double-double.

Lightning come from behind to make it two straight

After a slow start, the Lightning showed they have the ability to turn it on and grind out the close games securing a five-point win over Perth (74-69) to make it two wins on the trot to start the season. Perth flew out of the blocks early to establish a four point lead before Adelaide mounted somewhat of a comeback as the two sides engaged in constant lead changes. With the game on the line the Lightning put the foot down to tare away and create some scoreboard separation with a 23-18 last quarter effort, enough to earn the win.

Adelaide were well and truly put through their paces with Perth coming out with a real fire in the belly and intensity to register their first win of the season. They built some strong momentum however in the end it was the experience of the Lightning that gifted them the win, able to withstand the pressure and go about their business. In terms of field goal percentage there was not much that separated the two sides given the overall closeness of the game with Perth going at 34.3 per cent and Adelaide at 31.3. Lynx were more accurate from beyond the arc converting at a 21.4 clip while the Lightning only managed 14.3 per cent. Points in the paint were even with 30 apiece however Adelaide shone when it came to fast breaks nailing 11 to two while their ability to score off second chances was also impressive with 21-14.

Once again, Steph Talbot showcased her class and on-court dominance dropping a game-high 24 points while also reeling in 11 rebounds to walk away with another double-double in as many games. Marena Whittle was another key contributor for the victors registering 10 rebounds to accompany her 11 points as teammate Alex Wilson also chimed in with 12 points of her own to get her side over the line. Chelsea Brook also played a crucial role, bobbing up when needed to finish with eight points, three assists and nine rebounds.

The ever-reliable Katie Ebzery was up to her usual tricks providing the Lynx with plenty of chances to secure their first win of the season. Despite the loss, she managed 23 points, two rebounds and two assists in her 33 minutes on court. Darcee Garbin also proved to have a hot hand finding the basket with relative ease to amass 17 points, two rebounds and five assists. The only other player to reach double figures in the points column was Alex Ciabattoni who sunk 10 points while managing three rebounds and  three assists.

Back-to-back premiers, UC Capitals proved that they are still a team to watch with a strong showing against Townsville. After a shock loss in the season opener the Capitals came out with a point to prove and that they did earning a 11-point victory. The Capitals had not taken the court since Wednesday night with the break between games clearly paying dividends as they came out refreshed and with a clear game plan. Townsville were coming off a similar break but simply did not have the legs to go with UC who found their rhythm to capitalise against their still developing opponents.

Down at half-time the Capitals flipped the script in the third term to really turn the screws on the Fire going on a 22-10 point scoring spree. From there on the Capitals seemed to hold all the momentum and have all the answers for everything Townsville threw at them. UC showcased their class sitting at 45.8 per cent from the field while the Fire managed 36.1 per cent. The reigning premiers also highlighted their long range shooting sitting at a 35.3 per cent clip as opposed to 26.3 per cent. They dominated on the assists front with 18 to eight and also led the way in rebounds amassing 38 to 29. When it came to bench points the Fire made the most of their depth registering 25 points compared to 10 while they also made the Caps pay for their turnovers converting 15 points to five.

Maddison Rocci’s season only continues to get better, notching up another impressive performance amassing 24 points, seven assists and three rebounds. Rocci led the way for the Capitals while Marianna Tolo proved her worth once again, knocking back 13 points, three rebounds and two assists in a strong showing. With an impressive QSL season under her belt Mikaeala Ruef made her presence felt once again for the Caps nailing 10 points while also proving to be a menace on the rebounding front to draw in 13 and record a double-double. Keely Froling was the only other player to reach double figures for UC managing 11 points and nine rebounds.

Townsville had a couple of key contributors with Lauren Nicholson and Shyla Heal both plying their trade and impacting the scoreboard in a big way. Nicholson topscored with 19 points and four rebounds while Heal converted 18 points to accompany her four rebounds and four steals. Youngster Zitina Aokuso also worked her way into the game notching up nine points in her 20 minutes on court.