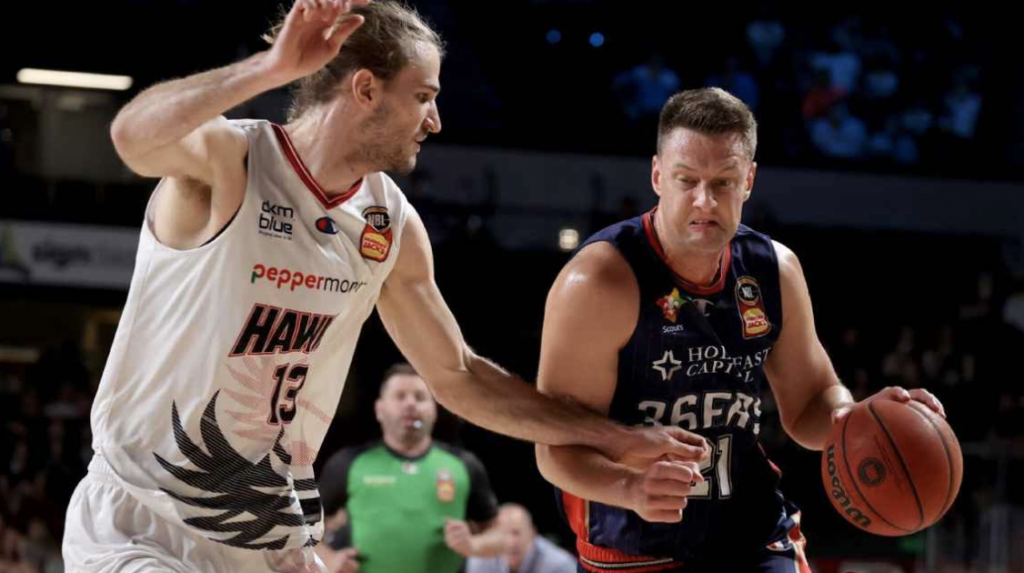 Adelaide’s shooting was lacklustre at best in the first quarter, shooting just 31 per cent from the field. However, the 36ers would lead 21-17 after 10 minutes and they could credit this to their three triples, six free throws and Daniel Johnson’s eight points, as Illawarra was the less aggressive of the two teams and with Tyler Harvey out, the Hawks needed someone else to step up.

Capitalising on turnovers and converting on fastbreak opportunities, the 36ers pushed their lead out to double digits as a quick scoring run in the final few minutes of the first half saw the home side take command of the game. To add to this, after a Daniel Dillon put back layup with two seconds remaining in the second quarter it extended Adelaide’s favourable score line to 46-32 and the raucous crowd at the Adelaide Entertainment Centre proved to be a major contributor to that.

Backing up Johnson in the first half, Josh Giddey was again facilitating Adelaide’s offence with seven points and six assists, while Keanu Pinder had numerous highlights too with six points in the initial two periods. For Illawarra, their first half success flowed primarily through Emmett Naar who had 11 points and an assist, whereas Justinian Jessup had a modest eight points through two.

Bursting out of the gates after the halftime talks, the Hawks began the second half on a 7-0 scoring streak which blossomed into a 17-3 run to try and resolve their less than satisfactory start, tying things up less than four minutes into the third which was helped along by Justin Simon who was absent in the first and second terms.

Illawarra’s ridiculously good start to the third saw them take the lead a few minutes before the final break, but Johnson helped to ignite some fire into the Sixers squad by kicking off a 7-0 run of their own to take back the lead by three quarter time, putting their noses in front 59-56.

A three-pointer by way of Sunday Dech was the first of many promising signs in the fourth quarter for Adelaide. This preceded what would be a 25-16 final quarter for the home side and an air of relief for Adelaide’s fans, ending what has been almost a month of disappointment for their team as the 36ers took home the hard-earned win.

The 36ers were fortunate enough that their field goal percentage rose to an amicable 40 per cent on their way to victory, which would ascend higher than Illawarra’s 38 per cent, as the two sides were in opposite positions in the infancy stages of the contest. Superb free throw shooting from Adelaide was also pivotal (18/20) and 20 second chance points highlighted the Hawks’ troubles when it came to important rebounds that were missed.

Always a workhorse, Johnson concluded Saturday night with 26 points and a monstrous 15 rebounds, as his guard counterpart in Giddey once again put up near-triple-double numbers with 13 points, 11 rebounds and eight assists. Pinder was as dominant as we have seen him this season with 10 points and three rebounds, as Brandon Paul contributed 10 points also. Jack McVeigh provided 10 points and five rebounds off the bench going three from three from the free throw line.

Adelaide will be the second of two opponents that the Perth Wildcats will face in Round 13 as the 36ers will need to play exceptionally well if they are to start mounting wins on top of wins, and it will be a true test of mettle against an in-form championship side. Illawarra will kick off Round 13 back at home when they host the Brisbane Bullets in what will be a contest of two teams keen to push for the four-spot in the standings.