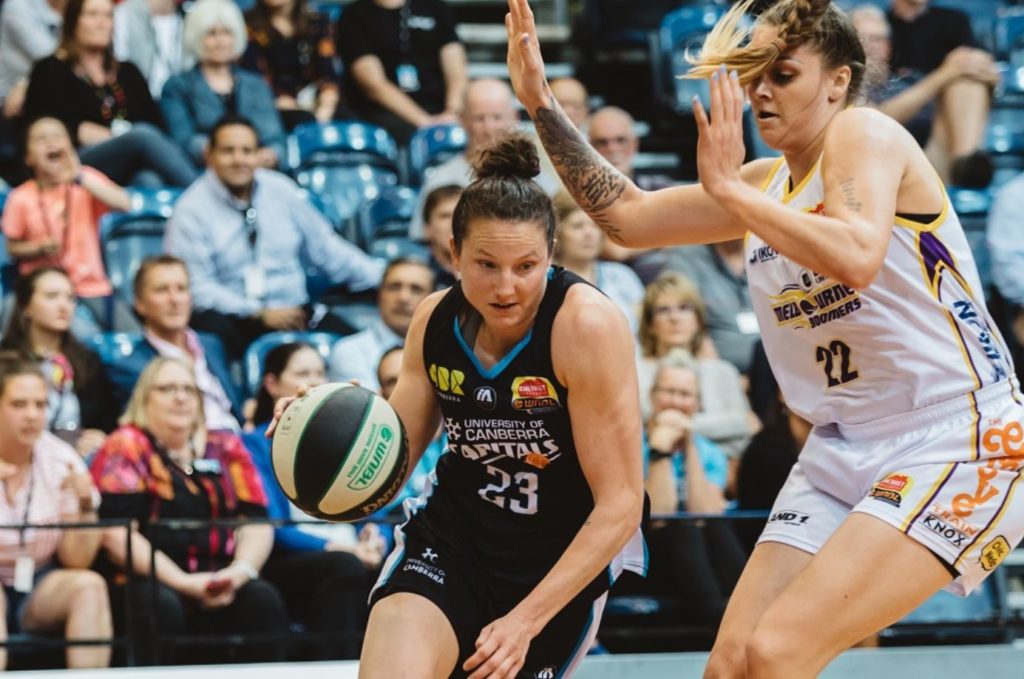 THE Women’s National Basketball League (WNBL) 2018/19 finals series is finally here, with the action beginning on Friday night. The top four placed teams in the UC Capitals, Melbourne Boomers, Adelaide Lightning and Perth Lynx have been the most consistent sides this season, and find themselves featuring beyond the regular season. The first semi-final series sees the Capitals take on the Lynx, while the Boomers will battle it out against the Adelaide Lightning in semi-final series two.

Griffin and Taylor are two of the most powerful forwards in the competition, and are arguably the two leading candidates for the Most Valuable Player (MVP) award. Taylor finished the season on an average of 19.76 points – which was the highest average out of any player this season. Griffin wasn’t too far behind though, coming third in the regular season for average points per game with 19.33. However, Griffin got on top in the rebounds with 11.62 rebounds per game. Taylor was a bit further down the list at eighth, with 8.29 boards per game. If Taylor can get on top of Griffin in the rebounds, she could minimise her influence, making big inroads to securing a series win for her team. Both players are likely to put up big points, so expect a high-scoring duel.

Kia Nurse has arguably been the Capitals’ second best player this season behind Griffin, while Schwagmeyer has been finishing off the 2018/19 season with great form. Nurse finished seventh for average points per game in the regular season, with 17.57. She also averaged the eighth most steals this season, with 1.48 per game. Nurse was a massive part of the Capitals’ season, averaging 34.13 minutes per game, which was the second highest game time in the league. Schwagmeyer also plays an important role for her team, averaging 13.9 points and 4.45 rebounds per game. While these stats don’t match Nurse’s, Schwagmeyer breaks the game apart with her influence, which could worry Nurse is she is kept quiet.

Regular season finish: The Capitals finished first on the table with 16 wins and five losses. Nine of those wins came consecutively towards the end of the season, with the Capitals recording an average winning margin of 25.8 points in that period. They also dominated at home, dropping just one game for the season, while away, they boasted a record win-loss record of 7-4. The Perth Lynx snuck into the finals on fourth position, with 13 wins and eight losses to finish off their year. The Lynx went on a six-game winning streak after their Round 1 defeat against Adelaide, but have been up and down since then. Nonetheless, Perth boasts an 8-3 win-loss record at home and a 5-5 record away.

The Lynx got the better of the Capitals in their first meeting of the season, storming out of the blocks with a 21-11 lead before the Capitals pegged the margin back with a 17-9 second period. Perth went on to score 20 and 21 points in the following periods while the Capitals managed 16 and 21. For Perth, Brittany McPhee top-scored with 19 points, while Katie Ebzery pulled down a team-high eight rebounds. Kelsey Griffin was the dominant force for the Capitals, scoring 30 points and pulling down 18 rebounds in an impressive double-double. Kia Nurse also contributed with 22 points and four boards.

This was a close encounter that saw Perth get the win on the back of a massive 33-point second term. In the first term, the Capitals got on the front foot to establish a 29-point lead, prompting the Perth fightback, and ultimately, the win. Alison Schwagmeyer was the standout player for Perth with 22 points and five rebounds. Asia Taylor was also busy with 21 points and nine boards. Griffin racked up another double-double against the Lynx in this game, this time racking up 14 points and 14 rebounds. She was complemented by Nurse with 17 points and nine rebounds.

This game was the game that started the nine-game winning streak for the Capitals, as they defeated the Perth Lynx for the first time this season. With these two sides clashing for the first time at the National Convention Centre, the Capitals were able to get an early lead with a 30-10 first quarter. Griffin scored yet another double-double against Perth, grabbing 27 points and 15 rebounds, while Leilani Mitchell made an impact off the bench with 22 points, five rebounds and seven assists. For Perth, Taylor and Schwagmeyer each bagged 14 points.

What we can expect: This series is likely to be a high-scoring affair, as these sides boast two of the highest scorers in the league. Griffin is definitely the player to watch for Perth, as she has managed a double-double in each of their regular season match-ups. Asia Taylor will play a big part in minimising her influence, as she has just as much firepower as Griffin, and led her in average points per game in the regular season. Brittany McPhee and Alison Schwagmeyer are two other dangerous players for Perth, but when held in check, they have very minimal influence, struggling to shake off the tag, which is something the Capitals should keep in mind. Leilani Mitchell has shown glimpses this season, while the return of Marianna Tolo has boosted the Capitals’ stocks in the key, which is why they should win this series.

Allen would be a contender to be the Boomers’ club champion, racking up some impressive numbers this season. She finished sixth for average points per game (17.95), third in average assists (5.24) and third in field-goal percentage (52 per cent). Allen also played a number of minutes for Melbourne, averaging 32.87 across the season. Seekamp led the way in steals for the regular season with 2.33, while she finished second in average assists with 5.86. The downside of her game is that she averaged 3.33 turnovers per game, which Allen could pounce on if Seekamp is sloppy in this game.

Coffey has been a revelation for the Lightning this season, averaging a team-high 17.95 points per game as well as 1.19 blocks. The battle against George will come in the form of rebounds, as both players have been dominant on the boards for their respective sides. George just edges ahead in this department, averaging 8.7 per game, while Coffey averages 8.43. If George can minimise Coffey’s scoring, we could see an even battle between the two.

Regular season finish: The Melbourne Boomers finished second on the ladder with 15 wins and six losses. At home, they recorded seven wins and four losses, and had an 8-2 record away. They come into this game having won four of their last five games. The Lightning stormed into third spot with an overtime win over the Perth Lynx. They ended their regular season on 13 wins and eight losses. At home, they won seven games and dropped three, while away, they won six and lost five.

This was a tight game throughout, with both the Boomers and Lightning scoring more than 20 points in all but one quarter of the game. This meant that one team took advantage of the other team’s weaker quarter, but in this case, Melbourne did it slightly better, coming away with a two-point victory. Jenna O’Hea led the way for the Boomers with 24 points, four rebounds and five assists while Lindsay Allen scored 18 points and pulled down seven rebounds. It was Nia Coffey who dominated for Adelaide, dropping 25 points and 19 rebounds in a mammoth performance.

The Boomers were again challenged by the Lightning in this game, but a 30-19 quarter got them over the line. Cayla George dominated for Melbourne with 18 points and 10 rebounds, while Lindsay Allen and Steph Talbot contributed well with 15 and 14 points, respectively. For Adelaide, Nia Coffey and Kayla Alexander each scored 18 points, with Alexander the superior player taking rebounds, pulling down 10 for the game. Sara Blicavs was also good with 11 points.

A 31-point first quarter from the Boomers got their game off to a good start, and they continued to outscore the Lightning in the second quarter 26-15. The Lightning fought back in the second half, outscoring Melbourne in the last two periods, but it wasn’t enough as the Boomers had a more clinical first half. Coffey and Alexander were the dangerous duo for Adelaide, as Coffey scored 26 points and five rebounds, while Alexander racked up 21 points and nine rebounds. Talbot and Allen played that role for the Boomers, with Talbot scoring 21 points, four rebounds and four assists, while Allen notched up 22 points, two rebounds and eight assists.

What we can expect: These games will undoubtedly go right down to the wire, and we could even possibly see an overtime period, considering how close the margins have been between these two teams across the season. However, the Melbourne Boomers have the upper hand coming into this game, winning all three games against the Lightning this season. But both teams are clutch in close games, with Adelaide proving that in Round 15 with a one-point overtime win against Perth. Expect Allen and Seekamp to battle well and try to get their teammates involved in the game, while George and Coffey will go hard at the rim. Maddie Garrick will be a player to watch for the Lightning, as she has had a strong run home with a solid number of points on the scoreboard. Melbourne will need to minimise the influence of Kayla Alexander in the series, because if she and Coffey get going, it could spell real trouble for the Boomers forwards.