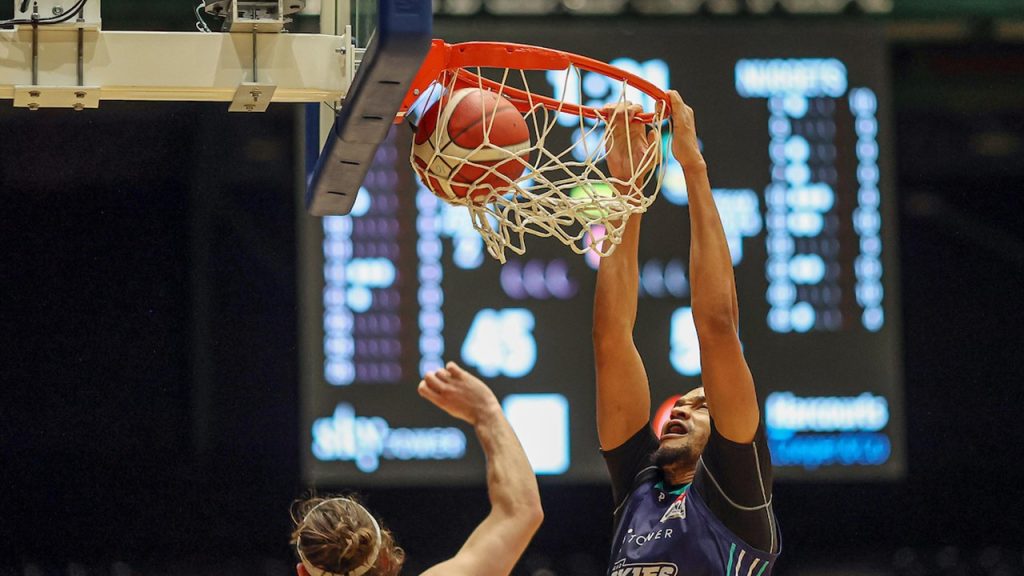 WELLINGTON Saints have returned serve on Hawkes Bay Hawks to post a thrilling overtime win in the New Zealand National Basketball League (NZNBL) last night, as the Auckland Huskies drew level with Otago Nuggets on eight wins following a memorable weekend of basketball. Whilst both contrasting results – the Saints winning by seven points after not being able to be split for 40 minutes and the Huskies dominating the second half to win by 23 – both were equally important for the Final Four calculations.

In the Saints-Hawks game, it was the visitors who raced off to a strong start in a high-scoring first term with 60 points on the board and a 32-28 lead in favour of the Hawks. They were hoping to win against the Saints for the second time in two weeks, but Wellington – despite playing in front of no fans – were not going to spoil their perfect home record thus far in 2021. The Saints quickly hit back with a dominant 30-17 second term to regain the lead by nine points and look to be in control. That was quickly whittled down by the Hawks who won the second term by seven, and they hit the front by three points in the last 10 seconds of the match.

Back-to-back Ethan Rusbatch free throws handed the Hawks a three-points lead, which meant Wellington needed a saviour. That came in the form of Tohi Smith-Milner who drained the three-pointer to level the scores at 98-apiece. The extra period was just as exciting, with the first eight points – including two triples to Taane Samuel – going the way of the Saints. From there they traded baskets, with Rusbatch and Jarrod Kenny both lively for the Hawks, though the Saints had the better composure as the experience of Kerwin Roach Jr and Dion Prewster to nail the free throws off the deliberate fouls handed them the seven-point win, 119-112.

Prewster won the Most Valuable Player (MVP) honours for a massive 34 points, nine assists and eight rebounds, coming agonisingly close to a huge triple-double in the win. Smith-Milner picked up a double-double of 21 points, 10 rebounds and four assists, but it was the deadeye long-range shooting of Samuel – 12 of 14 from the field and six of eight from beyond the arc – who recorded 33 points, four rebounds and two blocks. Roach Jr (16 points, five rebounds, four steals and two assists) and Kenneth Tuffin (10 points, four rebounds and two steals) also hit double-figure points.

Rusbatch had a team-high 27 points as well as two rebounds, whilst Hyrum Harris was a master thief on the night, racking up 10 steals, eight rebounds and five assists to go with 16 points. Devondrick Walker (19 points, three rebounds and three assists) and Derone Raukawa (16 points) reached double-figure points, as Kenny hit four of four from long-range on his way to 18 points and two steals, and Jordan Hunt managed 11 points, three rebounds and two assists.

Meanwhile in the more one-sided game, the Auckland Huskies overcame a one-point half-time deficit to post a big 23-point win. The visitors led by two points at quarter time, but lost the second term by three to head into the main break 40-39 down. The second half was a different story, piling on 30 points to 23 in the third term, then completely dominating the final one with 24 points to seven, and running out 93-70 winners.

Wellington Saints will play the Nelson Giants in a rescheduled clash on Wednesday night, before a second clash with Taranaki Mountainairs on Friday. Auckland Huskies also take on the Giants, on Friday night, whilst the Otago Nuggets host the Hawkes Bay Hawks on Saturday night.