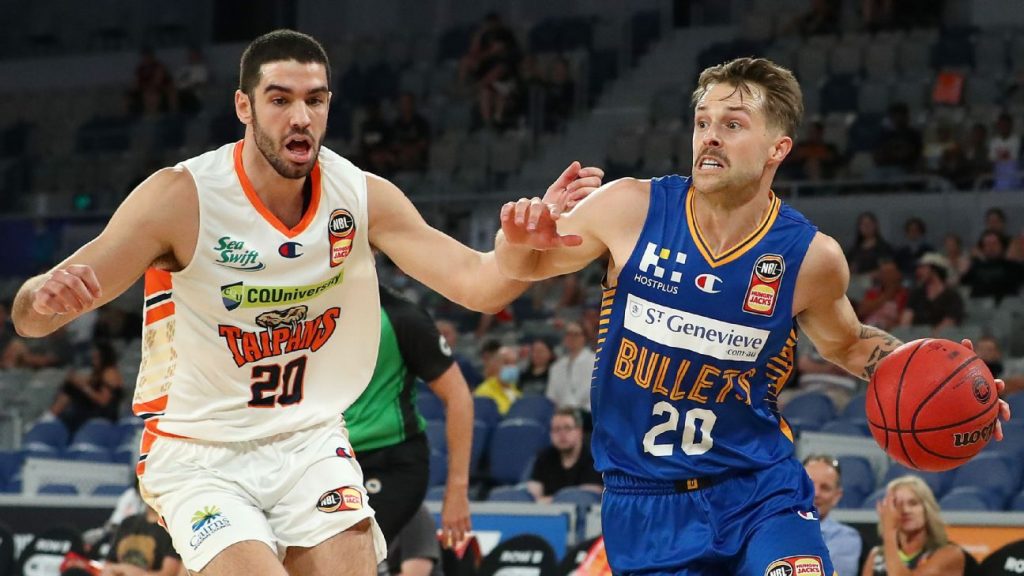 THE Brisbane Bullets closed out round seven with a commanding 115-95 win over their Queensland rivals in the Cairns Taipans. Although both teams sit at the bottom of the NBL Cup ladder, fans were hoping they could recreate their overtime thriller from earlier in the season which narrowly saw Brisbane prevail. While Vic Law and Nathan Sobey carried their side to victory in that performance, Law would see just 14 minutes of action in this matchup after being ejected from the game after receiving a second technical foul.

An even opening quarter was kicked off with a Kouat Noi layup, before Sobey would start the game the way he would maintain throughout with an aggressive triple as he made his way to 30 points on the night. Fabijan Krslovic was given the defensive role on the dangerous Law and although he kept him accountable up the other end, he could not stop Law from scoring and found himself in early foul trouble.

With the Taipans showing heavy reliance on their starters in all statistical areas this season, coach Mike Kelly needed someone to step up off the bench. Krslovic’s early substitution, Nate Jawai showed that he is still capable of playing a key role in the league dropping seven first-quarter points and providing plenty of energy on the defensive end.

Despite Sobey and a deep three to beat the shot clock, it was an even contest with the biggest margin being five. A Jarrod Kenny three late in the quarter gave the Taipans a 28-25 lead and the NBL Cup point.

The Taipans were shooting well from deep (4 from 5) and had one turnover to Brisbane’s five, but a three from Anthony Drmic and an old-fashioned three from Sobey would give the Bullets the lead and the perfect platform to build from.

Brisbane would go on to pile on 35 points in the second quarter as they managed stops defensively to go with efficient shooting despite Law’s absence through foul trouble. Cam Oliver getting into the game would help the Taipans get to within five points, before back-to-back triples from Harry Froling would push the lead back to 11.

Scott Machado free throws made it a 60-51 ball game at half-time, but just two made shots from Oliver was less than desired, as were the 60 conceded points.

Oliver would start the second half on a much more positive note with an and-one with the first possession, but some quick replies from Tyrell Harrison ensured the lead would not be hindered. This was until Oliver pushed back his range and after a couple of threes and some stops, the margin was cut back to nine points.

Despite the big quarter from Oliver, Law’s return saw the lead maintained for the Bullets as they held an 86-73 lead heading into the final break.

A Jason Cadee three was not the start the Taipans needed, but when Law was ejected and Machado baskets brought the margin back to 10, the Taipans still had a chance.

Eight points from Drmic included his fifth made three from as many attempts kept the Taipans at bay as the margin hovered around the 20-point mark for the rest of the quarter.

Sobey’s 30 points led the Bullets while Law still managed 14 points, but it was Drmic (20 points, seven rebounds) and Froling (15 points, 11 rebounds) off the bench who put in big games to help their side win as comfortably as they did.

The Bullets concede the most assists per game this season but won this contest 24 to 14. Six of those for the Taipans came from Machado to go along with 26 points. Despite a slow start, Oliver managed 21 points and six rebounds on 72 per cent shooting, while Noi was their only other player to reach double figures with 11 points.

Bench points continue to be an area in which the Taipans lack as they had just 26 despite four players playing 12 minutes or more.

The Bullets will play the Breakers on Wednesday, while the Taipans will face the Kings on Thursday.