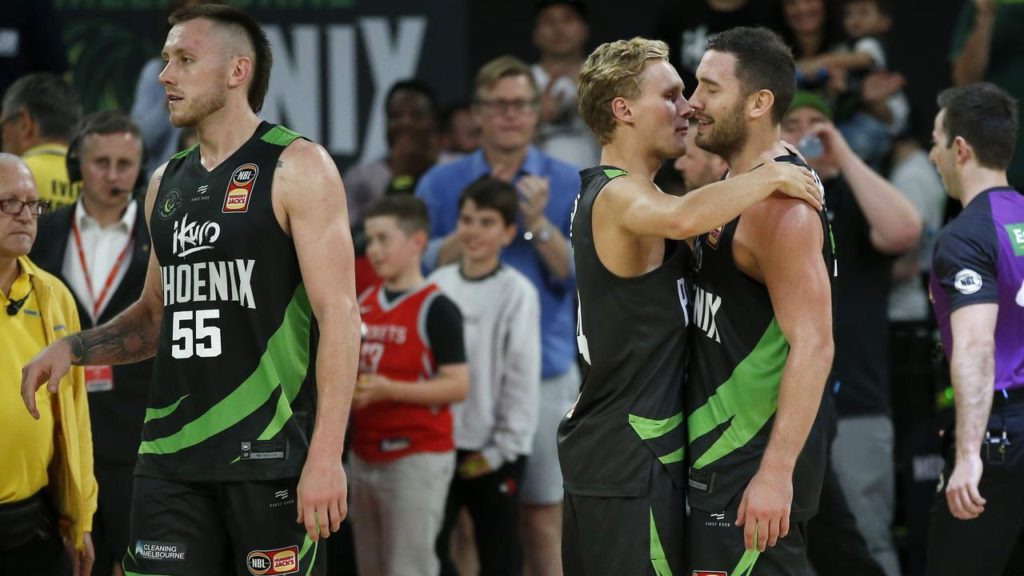 THE new boys on the block are certainly learning the ins and outs of the National Basketball League (NBL), which in turn has exposed them to ups and downs. But with just over two months remaining until finals action begins, South East Melbourne Phoenix are right in the thick of the race.

With the season having just passed its midway point this past weekend, the Phoenix find themselves dead even in their win-loss record and with a double header weekend coming up against the New Zealand Breakers on Friday night and then the ladder-leaders Sydney Kings on Monday, the Phoenix will have a chance to really prove their mettle in the race for a top four finish.

But how did this team’s inaugural season start and what led them to this point today someone might ask. For the Phoenix, their season has been anything but consistent with the team experiencing both winning and losing streaks under the guidance of first-time head coach, Simon Mitchell.

How did we get here?

To open the season, the Phoenix opened up their history with the first ever ‘Showdown’ with cross-town rivals and big brother, Melbourne United. With more than 10,000 Melburnians in attendance, the Phoenix stunned the Australian basketball community with an upset win over their well-established counterparts. The win was aided by their marquee signing in Mitch Creek, who in his first game in the green jersey, amassed a double-double with 28 points, 11 rebounds and four assists. A similar stat line that he has maintained throughout the season. The campaign opener kicked off the Phoenix’s season, as they were triumphant in their first three match-ups including United. The next two victories came against two of the current bottom three teams in the league at the moment, the Brisbane Bullets (won 113-93) and the Illawarra Hawks (won 106-102). After going 3-0 to start their inaugural season, the Phoenix were on cloud nine, but they had a next level opponent on the horizon. One that was head and shoulders above the last combatants they had faced. The defending champions, Perth Wildcats. What occurred on Friday, October 25 gave the Phoenix a good indication of how difficult Australia’s top league could get and how much work this new team would have to do if they were to make it beyond the regular season.

The mantra that the Phoenix have followed so far to this point is not getting ahead of themselves and not dwelling too much on each result, which Creek touched on post-game after their first loss of the season.

“At the moment it’s about being cool, calm and collected for myself,” Creek said. “We’re young, we’re a brand-new franchise and we’re still figuring things out. We’re gonna be okay.”

Following that first game against Perth, the Phoenix would not go back-to-back in either wins or losses until their third encounter with Melbourne United, which kicked of their first losing streak of the season, falling first to United in a one-point thriller, then to the 36ers, and then to the Sydney Kings. Fast forward three weeks and South East Melbourne would emerge victorious against the Bullets away from home, lose to both Perth and Adelaide, and then shocking Cairns in an overtime classic at Melbourne Arena, leading us to today with the Phoenix sitting on a .500-win percentage with seven wins and seven losses.

What does the Phoenix’s season say about them?

The Phoenix have proved they have class to boot and can match it with the best with coach, Simon Mitchell emphasising the point of being a growing and emerging team. But he also stated in the press-conference following their comeback overtime win against the Taipans, “the training wheels are off.”

“We don’t consider ourselves an expansion team [anymore], we are what we are right now and we’re gonna have to blaze away through the rest of the season and just go and take care of our business.”

“It’s gonna be a hard run home for everyone.”

Given that the Phoenix can basically touch that fourth spot on the table with a good couple of a games, it is doubtful that Mitchell will have the same attitude that he expressed in that post-game press conference following their first defeat against the Wildcats. In terms of play, the Phoenix do indeed play an entertaining brand of basketball. One that has high octane offensive capabilities, but it also has a defence that has some kinks in it, which the coaching staff works tirelessly to improve.

Nevertheless, due to the Phoenix’s new chemistry as a result of it being their first season, it seems that it is only a matter of time before morale and trust start to mesh, which would be a promising prospect for one of the league’s more mediocre defences.

But as mentioned before, it is the Phoenix’s strong offence that shines through. At the forefront of their attack sits Creek, who showcases his skill on a game-to-game basis leading the league in points, averaging a remarkable 22.71 points per game. With his scoring ability comes his ability to move the ball as well, as he totals 3.93 assists per game in addition with 7.43 rebound per game. It should also be mentioned that with the return of Tai Wesley, Creek now returns to his usual small-forward position where he has proven more lethal in the past, a key sidenote in analysing this week’s contests.

Alongside Creek, sits sharpshooter guard John Roberson who helps share the scoring load and is often the reason opposing teams fall to the Phoenix’s three-point barrages, just recently dropping 36 on Cairns this past Sunday, which included eight threes from the import. Roberson averages a hefty 20.36 points per game, adding four threes a game, along with 5.43 assists to round out his contributions. With weapons like Roberson, Ben Madgen, Adam Gibson and Kendall Stephens in Mitchell’s backcourt it has looked like the smalls’ play that has determined results in the past, but in fact it is the Phoenix frontcourt that provides the best chance for the newcomer team to push past the regular season. The Phoenix frontcourt comprising the likes of Dane Pineau, Wesley, Daniel Trist and Keith Benson who have much left to give in the second half of the season.

For Pineau and Wesley, the weight of the defensive schemes is placed primarily on their shoulders given their experiences and ability level, while Creek does most of his work on the wings. Pineau, who has had a relatively solid season averaging close to eight points and eight rebounds a game, has increased his workload after being upgraded to starter under Mitchell following two years at the Sydney Kings. His ability to move the ball, crash the boards and coordinate the defence are Pineau’s primary weapons, which will also be key in both this Friday and Monday’s contests.

With Wesley finally back in the line-up following his nine-week hamstring injury, the Phoenix should have the ability to rebound more efficiently with Wesley’s inclusion two weeks ago. During Wesley’s three games since being re-activated he has averaged 11.3, 2.6 rebounds as well as 3.3 assists. These recovery games have been instrumental for Wesley’s return and he should be back to full form for the remainder of the season.

The Phoenix cross the Tasman to duel with the Breakers who are hot off a devastating loss to the Adelaide 36ers and we will have to wait and see if New Zealand comes out angry or deflated. Whichever one it is, it will be the Phoenix’s frontcourt that will need to step and help its guards, as we can expect a slashing style offence with the likes of Corey Webster, Sek Henry, RJ Hampton and Tom Abercrombie.

Given the match-ups as well for SE Melbourne’s backcourt, constant feeding into the bigs will be a good source of scoring for the Phoenix, as New Zealand has shown holes in its defence over the season, particularly around the basket. Wesley and Pineau should aim to get more shots up on Friday compared to previous rounds.

South-East Melbourne will also have the task of silencing a hostile Kiwi crowd which almost willed home a victory this past Sunday. To achieve this, Simon Mitchell’s men will need to get out ahead and quickly, something that has been lacking recently in the Phoenix’s mentality.

Should the Phoenix earn a win on the road against New Zealand, the importance of their game against the Kings would become that much more crucial. The main concern for the Phoenix, would be their ability to contain the quickness of the Kings backcourt. Sydney’s main offensive weapon is their ability to penetrate defences and either dish off to bigs around the basket or find open wing players for the three-pointer.

Helping out in defence is a fundamental key in slowing down the steamroller that is Sydney’s offence, so for the Phoenix, communication and roles will once again be crucial. The main matchup however will not necessarily be Roberson versus Casper Ware, in fact it can be argued as being between Creek and Jae’sean Tate, with Creek back at the three spot. Tate does hold speed and shooting ability under his belt, but Creek’s defence should cover most of what is presented to him, as well as his rebounding ability and finishing around the basket.

Both games are important for the Phoenix, games that may define the rest of the season for them to see if they do belong in one of those top four spots compared with the 36ers, Taipans and United.