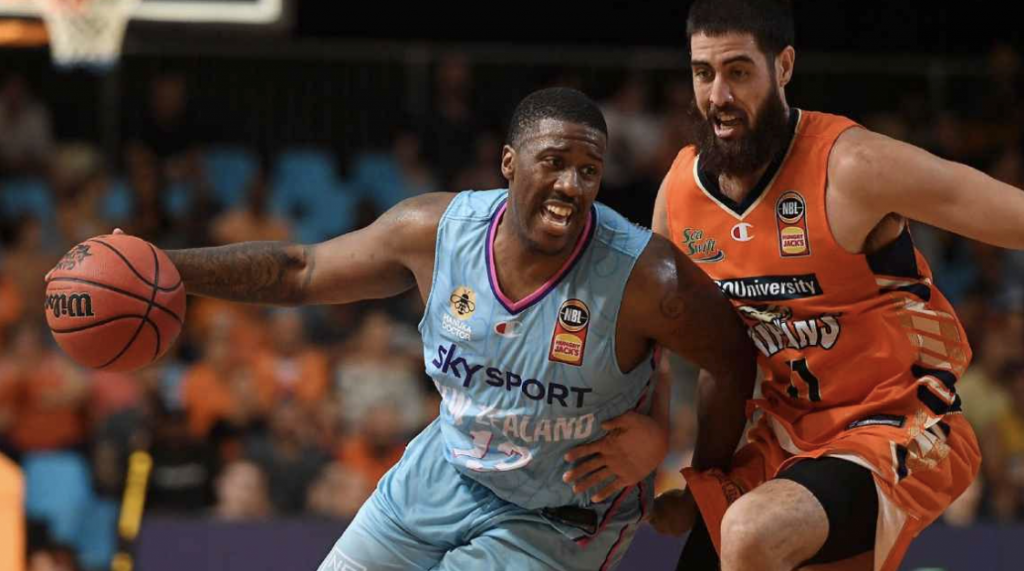 AFTER an extraordinary fourth quarter comeback and some vital free throw shooting in the dying stages of yesterday’s opener, the New Zealand Breakers have stolen their first win of the NBL21 season from the Cairns Taipans, 85-79, which as a result now extends their opponents’ losing streak to six games.

It was a particularly slow initial period for Cameron Oliver, attaching zero points to his name through 10 minutes of play, therefore earning him a spot on the bench to start the second quarter. After a 10-day break, the Breakers found their rhythm early on through the work of Tai Webster and Finn Delany, leading 25-20 at quarter time up in Cairns.

But the Taipans started to fight back for their home crowd in the second, taking the lead during the middle stages of the term. With Oliver starting to convert and Scott Machado commanding an efficient offense, the timing provided positive results leading into half time.

Edging out a three-point 44 to 41 lead at the main break, Cairns was looking relatively good for a side trying to shake a five-game losing skid. Machado was a major proponent for this securing 18 points, six assists and three rebounds throughout the first half, while Webster gifted the Breakers with 18 points of his own as they pummelled Cairns down low in the paint.

The contest started to fall heavily in favour of the hosts with Cairns extending their advantage over the Breakers to double digits late in the third quarter. Strong middle quarters proved to be a pivotal event during yesterday’s opener, but a minor late run for New Zealand brought the deficit back to just seven points – setting up a quarter of basketball that could mean a win for either side.

A few key plays by Lamar Patterson and Colton Iverson to open up the final stanza began to make the crowd uneasy, but Kouat Noi’s triple three minutes into the fourth settled some nerves and put the Taipans in good stead.

Many expected the Taipans to eventually run away with the game in the fourth, but through sheer resilience, the Breakers would fight back in the last couple of minutes to complete what was a titanic comeback after Patterson’s two free throws to give New Zealand the lead.

The next possession, an And-One from Oliver returned the lead to Cairns with 90 seconds on the clock. Two more free-throws from Patterson tied things up at 79 and a fastbreak dunk from Thomas Abercrombie propelled the Breakers to a two-point lead with 27 seconds remaining.

Four more free throws converted by Delany and Webster capped off a monumental fourth quarter effort by the Breakers to steal away an 85-79 victory, earning their first NBL21 triumph of the season.

While there was little to separate the teams statistically, it came down to rebounding and second chance points it seemed, as the Breakers won out convincingly in both of these categories. New Zealand out-rebounded the Taipans 49-41 after four quarters and earned a plus-seven in second chance points (13-6), which numerically proved to be the difference.

Best categorised as a two-man show, New Zealand’s performance overall was facilitated primarily by the combo of Webster and Patterson. Webster was on another planet entirely during his 32 minutes on the floor, accumulating 25 points, 11 rebounds and five assists, whereas Patterson was lethal from all over the floor with his 22 points and five boards. The only other double-digit producer for the Breakers was Delany, who scored 13 points and fell one rebounds short of a double double with nine rebounds, as Abercrombie was held quiet on the night with a humble eight points to his name.

Once again falling short in front of their own fans, Machado handled his own with 25 points, 12 assists and six rebounds. However, a slow first half did not deter Oliver as he picked up his intensity in the second finishing with 17 points and 10 rebounds, while Noi concluded a solid night on his end with 12 points and six rebounds.

The two sides will go at it again in Cairns to finish off Round Four on Monday night as the Taipans six-game losing streak continues as one of the league’s top headlines at this time, even more so due to the fact that it is occurring on their home court. On the other hand, New Zealand can make up more lost footing in the standings if they are able to topple their current opponents in their next time out.