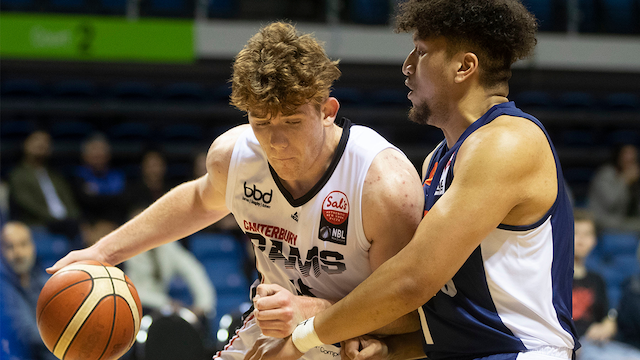 CANTERBURY Rams have remained in the 2020 Sal’s National Basketball League (NBL) Finals Series following a tight four-point win over Nelson Giants, eliminating their opponents in the process. In what was a battle between the bottom two sides and the first of four sudden-death finals should one of these sides have made it to the grand final, the Rams were able to build on their last round win and record a narrow 93-89 victory thanks to strong play through the middle two quarters.

Despite their low finishes on the ladder, a salivating matchup always beckoned as arguably the best back court in the league of the Rams contested arguably the best front court in the league of the Giants, and that was where the game started. Mike Karena won the tip emphatically and set the tone for the Giants’ offence early as the ageless Mika Vukona drove straight to the cup for two. Up the other end, Taylor Britt opted to be the facilitator and dropped a dime to offensive leader for the first half in Quintin Bailey for two at the rim for the Rams. Britt then found Toby Gillooly on the perimeter for three who was looking to have an impact early after fouling out in their last outing. With both teams knowing it was a do-or-die match, the intensity was red hot and Giants captain Tom Ingham stepped up with the reply from deep. It was game on.

All the stars were involved early as Tall Black Reuben Te Rangi used his strength to score inside, and Dane Brooks split the Rams defenders to earn his way to the free-throw line for two. The Giants controlled the early stages of the game as seven individual scorers saw them get out to an 11-point lead. With Karena getting on the board with his trademark post-hook, Rams coach Mick Downer had seen enough and called a timeout. He was not happy with his team’s tempo offensively and some errant passes, a sign that there was a lack of cohesion and chemistry due to not having a full-strength side for much of the season, as well as their defensive effort labelling it as “garbage”.

Canterbury managed to find another gear to finish the quarter much like their game on Saturday as Sam Smith hit his first of three triples for the game, and Alex Talma got it done at both ends of the floor. The game was back to a one possession lead until the experienced front court of the Giants managed a couple of baskets late in the quarter as the scores read 30-26 at the first break.

High intensity and efficiency offensively for Nelson saw them shooting 66 per cent from the three-point line while it was Bailey, who got the starting nod for the game, and his 10 first quarter points keeping the Rams within arms-length.

Britt made his way to the free-throw line to score his first points of the game two minutes into the second quarter, but he still hadn’t made a shot from five attempts on the floor. Ingham also hit from the charity stripe to find his way to double-figure scoring, as five quick fire Te Rangi points tied the scores for the first time since the early part of the game. Britt eventually made his first shot from the floor, but it was Ingham again stealing the show with a corner three, before forcing Gillooly to roll his ankle with a vicious step-back jumper on their next possession.

Jack Exeter returned from concussion with a corner three of his own, and Talma’s tough defence on Karena led to him draining a triple from the wing up the other end. He managed to keep Karena to just six first half points as the Rams led 49-47 at the main break thanks to their resurgent defensive effort. Bailey (13 points) and Talma (7 points, five rebounds) led the way for Canterbury while Britt was restricted to just four points (1-8 shooting). Nelson’s 10 turnovers were a concern with five of them coming from Vukona, but his nine points and eight rebounds (three offensive) were also very valuable in keeping the contest tight.

Josh Bloxham tied the game again with a layup to start the second half until the Talma and Karena matchup started to fire up. Both fired shots at each other from both ends in an impressive showcase of skill and speed from the big men. Talma eventually went down with an ankle injury after landing on it awkwardly in a shot contest. He would ice up and not return for the rest of the game. Nelson tried to expose the defensive hole that was left as Karena bullied his way to two offensive rebounds and an and-one. With Vukona securing a double-double with a quarter and change left to play, a Canterbury big needed to step up, and they did. The 18-year-old Tom Webley kept the pressure on Karena at both ends and ended the game with 13 points and seven rebounds, playing a big role in many of their defensive plays. His involvement sparked another late-quarter run for the Rams as they dominated the final three minutes to take a 76-66 lead heading into the last break.

Turnovers were again a big reason the Giants found themselves down having recorded eight in the third quarter alone, something they needed to rectify if they had any chance of keeping their season alive. Despite Webley’s solid play, Karena continued to attack him with an and-one starting the Giants on the right path of a comeback. Nelson oozed full court defensive pressure and active offence as the Giants knew it was all or nothing. Despite this, they could not quite take a big enough dent out of the Canterbury lead.

With just under four minutes left, a Tysxun Aiolupotea runner sparked a seven to nothing run to be back within four points with just a minute and a half left. This was the finish the fiery first half promised fans. The Giants managed another stop and had a chance to dig into the lead again. The ball pinballed around the court as neither team could quite recover the ball cleanly, until it slipped into the hands of Britt and he wasn’t letting go. Looking to extend their lead, he took off but was stopped and fouled at half court with 37 seconds left. The referees deliberated on whether it was an unsportsmanlike foul, and with enough contact, that call was made. After making the two free throws and getting to the line on their retained possession, the lead was back to eight and it looked like game over. That was not the case.

Brooks hit a three on his second attempt in the possession and in his typical athletic fashion, he forced a turnover on the inbound pass with a huge dive. A quick Ingham three bounced off the rim and into the hands of Karena who is not known for his exploits from deep, yet he understood the situation of the game and Reggie Miller step-backed behind the line and drained it. The game was back to two points but unfortunately for Nelson, the lead only extended with the Smith free-throws the last scores of the game.

A valiant fightback fell short as the Rams won 93-89 and with them back at full strength, four wins in five days to win the championship isn’t out of the realms of possibility. Despite a quiet first half, Britt led a team-binding win with 15 points, eight rebounds, seven assists and three steals while Bailey’s 19 points and eight rebounds was important for their first half efforts. Te Rangi (11 points, five rebounds) was important, while fans wait on news on Talma’s (10 points, five rebounds) injury.

Karena (19 points, five rebounds) and Ingham (19 points) were the best for eliminated Nelson outfit, as Vukona did what Vukona does and put up 14 points and 16 rebounds in the loss. As the Giants head home from the competition, the Rams now take on Auckland Huskies for a spot in the semi-finals. If the Rams get up, they will face the red-hot Otago Nuggets in the semi-finals.