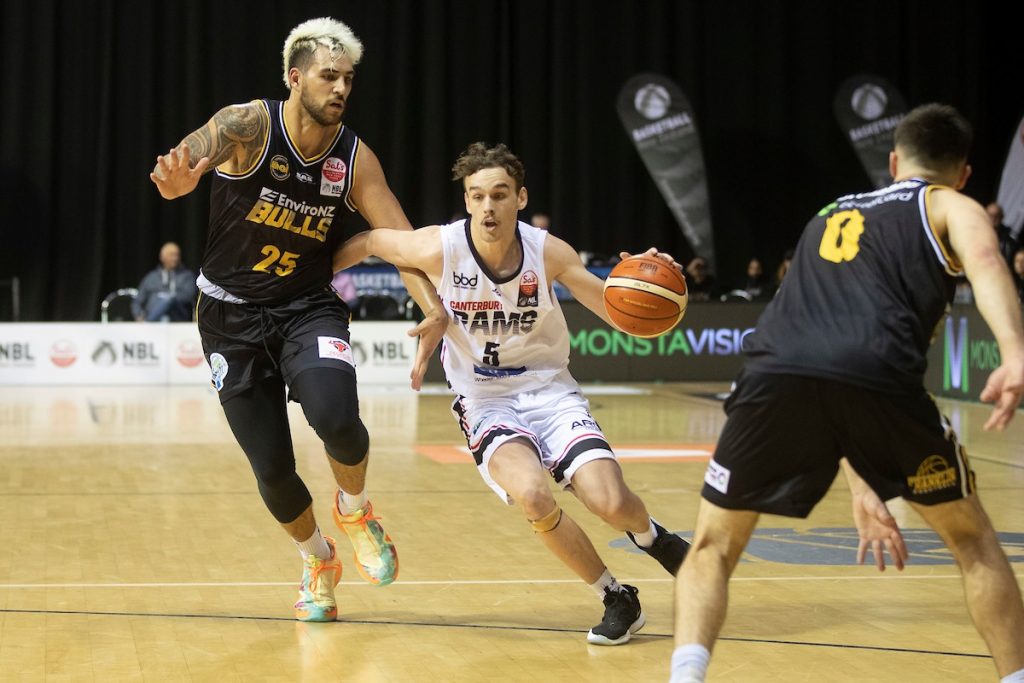 CANTERBURY Rams have set up a tantalising clash with fellow undefeated side Taranaki Mountainairs on Saturday after the Rams held on against a gallant Franklin Bulls outfit to win by three points in the 2020 Sal’s National Basketball League (NBL) last night. The Rams led by as much as 10 points at half-time, but had to survive a fierce Bulls charge even as late as the last 30 seconds before managing to seal the deal with a couple of made free throws in the 75-72 triumph.

The Bulls started the stronger of the two sides with talented youngster Isaac Davidson kick-starting proceeding with an early lay-up, and when Dom Kelman-Poto got fouled on his way to the basket, the Bulls held an early advantage. Taylor Britt and Toby Gillooly were starting to show signs of being a problem and picking up where they too left off in their last match, with the pair piling on the points in the term, with 12 consecutive points helping the Rams to an eight-point lead.

When Ben Carlile-Smith slotted a floating jump shot to lead 18-10 with two and a half minutes remaining, the lead at quarter time looked assured. Kelman-Poto capped off his strong quarter with another lay up, whilst Jackson Stubbins‘ jump shot in the dying seconds meant the Bulls only trailed by four at the first change.

It was no surprise to see Britt burst out of the blocks early in the second, quickly adding four more points to his tally as the Rams extended the lead to 10. Everard Bartlett dropped a triple to throwback to the night before, but they were not having the same time and space in this match. The Bulls were constantly bringing on substitutions to throw off the Rams’ defence, with Nicholas Barrow bringing the deficit back to seven points, only for back-to-back threes from Jack Exeter, and then one from Mac Stodart to blow the game wide open to 16 points.

Gillooly continued on his merry way, and by the time he had completed a couple of free throws with two minutes remaining, the Rams were sitting pretty at 40-23. Franklin refused to fade away in red time however, as they scored the last seven points of the game, as Kelman-Poto was again busy with five of them to make it a big half for the Bulls’ first selection in the Sal’s NBL Player Draft.

The Bulls needed a response in the second half, and it was Sam Timmins who got the first points on the board through a lay up. Britt was still hanging around hough and causing a nuisance for himself wiht back-to-back baskets himself. For almost a minute and a half, neither team could score from the moment Davidson drew his side within 10 points at the seven-and-a-half minute mark. After Stodart increased the lead back out to 13 at the midpoint of the term, it was Davidson, Nikau McCullough and TImmins who worked it back, before Joel Vaiangina was fouled on a jump shot, converted the and-one, and the Bulls were within three with three minutes to play.

Once again it was Britt who stood tall with an important relieving basket, then a pair of three throws moments later to give the Rams a bit of a buffer. Neither team was able to really blow the other away heading into the final break with Kelman-Poto’s final two free throws cutting the deficit to five at the change.

Kelman-Poto and Davidson immediately had an impact in the final stanza to cut the deficit to one with eight minutes to play, before Mason Whittaker nailed a triple. Back-to-back Bulls baskets, the last from Timmins tied the game with six and a half minutes to play, and the Rams called a timeout sensing the urgency of the moment in the game. Britt was importantly substituted back in, and he immediately assisted Sam Smith off a defensive rebound to set up the next five points for the Rams.

The match still had plenty of twists and turns however, with Davidson answering Smith with another five points off his own, while McCullough put the Bulls in front for the first time since the first quarter with four and a half minutes left in the match. The pressure was building as the Rams converted some free throw opportunities wither side of a massive Timmins dunk. From Thomas Webley‘s second free throw made with 44 seconds left, the Bulls led by four.

Bartlett had a three-point point opportunity, missed and Britt picked up the rebound, got it to Gillooly who was forced to the charity stripe by Kelman-Poto. It proved important because the top scorer from game one missed both, and Timmins grabbed the rebound, before the ‘Ice Man’ Davidson drilled a triple and with 23 seconds left, the Bulls trailed by a point.

Bartlett immediately fouled Smith to not lose any more time, but Smith made good on both his free throw chances to put the lead out to three with 20 seconds remaining. The Bulls believed they could nail the three-pointer to tie the game, with Bartlett given the chance with four seconds remaining but his shot hit the rim and bounced off for Britt to snatch one more rebound as the buzzer sounded moments later for a important Rams win.

Britt was once again superb picking up a double-double with that last second rebound to end the match with 19 points, 10 rebounds and two assists, aided well by Rams teammate Gillooly who had the 16 points and five rebounds. Alex Talma was strong off the boards to grab nine rebounds – including five offensive – to go with his seven points, whilst Smith and Stodart both ended with nine points apiece. For the Bulls, Kelman-Poto matched Britt’s effort with a double-double of 20 points, 10 rebounds and three steals himself, whilst Davidson had 21 points and three rebounds. Timmins finished with a handy 13 points, six rebounds and two blocks.