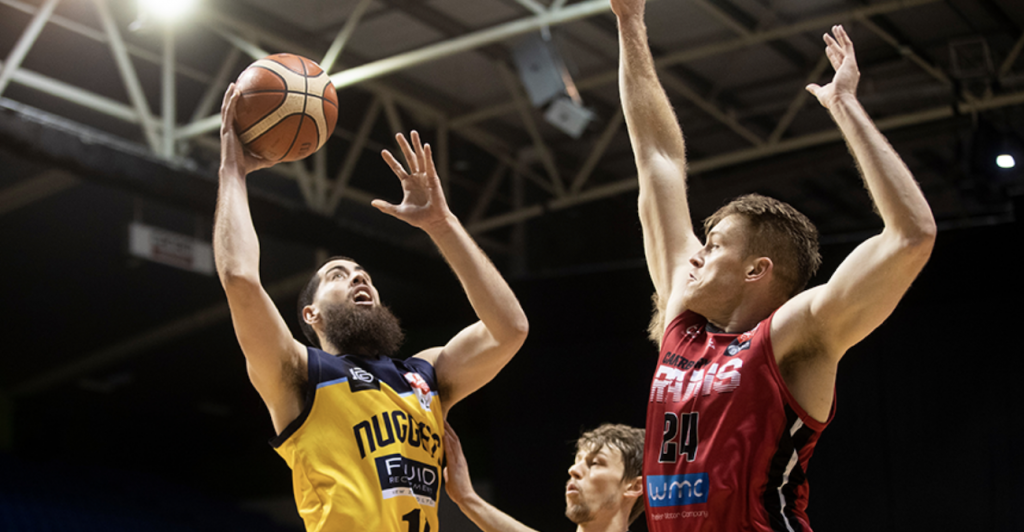 OTAGO Nuggets have rebounded back from their disappointing result on Thursday night against the Franklin Bulls, knocking off Canterbury last night in the Battle of the South. The result caused the Rams to enter a three-game losing slump in the 2020 Sal’s National Basketball League (NBL) Showdown as a handful of their players were feeling under the weather prior to tipoff, in particular Taylor Britt.

A certain matchup that fans were excited to see, was the duo of Canterbury’s Britt, who is a current Perth Wildcat, and Jarrod Kenny, a former Wildcat himself. In true fashion, both of the men would open up the scoring for their respective sides in an accurate first quarter.

For the Rams, 17 shots were hoisted up in the opening period, 10 of which found the mark (58 per cent). Whereas, for the Nuggets, they shot 52 per cent, but made up for that in attacking the rim and getting to the line. With Jordan Ngatai and Jordan Hunt leading the charge, Otago would convert on six attempts from the charity strike, compared to Canterbury who never made it to the free-throw line once in the introductory 10 minutes.

With both sides landing punches in most of the following quarter, neither team could genuinely gain the upper hand and bend the contest to their will, which made Matthew Bardsley’s eight second-quarter points and five rebounds a section of the game to watch with intent. Bardsley shot four of five from the field during the second quarter in just five minutes of court time prior to the end of the first half, helping the Nuggets to grab the game with both hands, leading 42-56 after two quarters.

As Britt exited the game temporarily due to illness, everyone was expecting the Nuggets to run away with the contest, as the Rams were without their marquee player. But Mick Downer’s squad were not going down without a fight, as they not only outscored the Nuggets in the third quarter, they held the other team to just nine points, putting them in good stead for a late game charge in the final 10 minutes.

Early in the fourth, a layup through contact and a three from Quintin Bailey would bring the deficit to just six points for the Rams, kickstarting a late run that Canterbury were hoping for at the end of the third, and after his return three minutes into the fourth, Britt’s layup would make the clash a one possession game, at 65-68. Furthermore, when big man Thomas Webley followed up with a nice finish around the rim, it cut the Nuggets’ lead to just one point with 6:16 left capping off an 18-7 run, providing a game that anyone could snag.

But Otago was not going to let another match slip through their fingers, as a barrage of triples from Richard Rodger and Kane Keil would round out a stellar night for the Nuggets eventuating in the 87-77 triumph.

While the Rams shot better as a team through all four quarters, going 33 of 68 (48 per cent), the factors in the final result came down to the three ball and free throws, as the Nuggets attacked the rim hard and found the open shooter at an extraordinary rate, accumulating 11 three-pointers and 12 free-throws in the win.

Secondly, the Nuggets’ bench proved to be much more effective, outworking the Rams in points off the bench 36-24, allowing stars like Ngatai and Kenny to gain valuable rest heading into their next contest against the Huskies on Tuesday.

For Ngatai specifically, he finished his performance with a team-high 19 points, as well as five rebounds, four assists and three steals, boasting another all-around game for his side.

While Kenny would squabble for just one three-pointer in 21 minutes of game-time, he managed to pass the rock well, providing five assists for his side. Meanwhile, Keil was a major surprise, accounting for 16 points, with 12 of which coming from behind the arch, allowing him to make his first notable mark on the season so far.

High scoring totals are becoming the norm for Britt in the Sal’s NBL competition, hoarding 21 points in 21 minutes on the floor along with six rebounds and five assists. Also putting up solid points and rebounding numbers was Samuel Smith and Alexander Talma, who gathered 12 points, seven rebounds and 11 points, eight rebounds respectively, as Benjamin Carlile-Smith pulled down a game-high 11 rebounds.

The Rams now face a pivotal crossroads in their season, as another loss would place the team outside the top four while also pairing the squad with a four-game losing streak, bearing in mind they need to figure out how to defeat a red-hot Franklin side. To Otago, they could challenge for a top-two seed if they can topple the struggling Huskies in a few days.