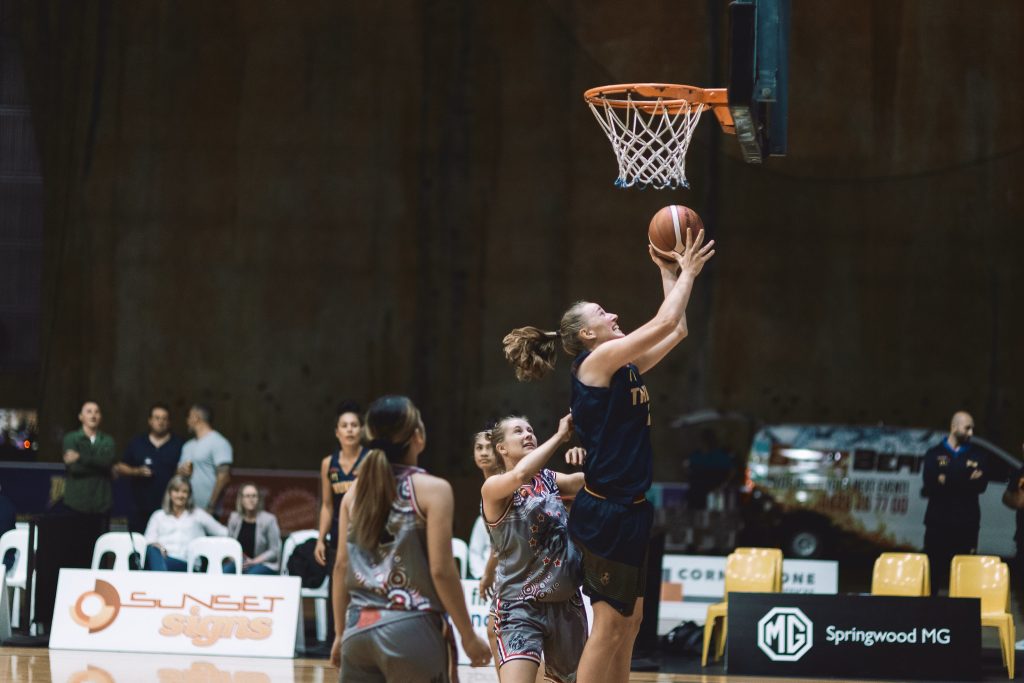 LOGAN Thunder showed no mercy during a 62-point shellacking of Ipswich Force in the semi-finals of the Queensland State League (QSL) Women’s competition, running out 104-42 winners. In the other semi-final, Southern Districts Spartans claimed a tighter eight-point victory over Gold Coast Rollers to advance through to tonight’s QSL Women’s decider.

Second placed Southern Districts Spartans made the most of a week off during the finals to book their spot in the QSL Women’s decider thanks to an eight-point triumph over Gold Coast Rollers. Despite the Rollers being deadly from range – sinking 10 of 26 at 38.5 per cent accuracy – they only managed a lowly 14 of 47 from two-point range – a much lower 29.8 per cent. The Spartans were contrasting with a low five of 23 from long-range – 21.7 per cent – compared to a higher efficiency of 48.2 per cent thanks to 27 of 56 from two-point range.

Outside of shooting, it was the Spartans who controlled the boards and assists, which was the difference in the end. The home team racked up 58 rebounds to the Rollers’ 33, and it was a similar story with the playmaking, more than doubling the assist totals with 21 to 10. The Rollers did have three more steals (12-9) and eight less turnovers (13-21) to keep them in the game, but it was the Spartans’ second chance points (11-4) that helped them recover from some missed opportunities.

Madelyn Willey was the top scorer for the winners in a shared effort, picking up 20 points, seven rebounds, three assists and one block. She was far from alone however as two of her teammates collected double doubles. Rebecca Haynes (13 points, 12 rebounds, one assist and one steal) and Kalani Purcell (13 points, 13 rebounds, two assists and four steals) both took control of the contest, though Haynes was much cleaner with only two turnovers to Purcell’s 11. Nonetheless they both had big nights out.

Also enjoying the win and some handy contributions were other Spartans in Holly Smith and Emily Preston. Smith notched up 12 points, seven rebounds, four assists and one steal in just 20 minutes on the court, while Preston had 11 points, five rebounds and one assist. The key playmaker on the Spartans’ side was Natalie Taylor, whom whilst she would have preferred to have shot better from the field – just two of 13 and zero of five from two-point range – she had eight assists, five rebounds and two steals.

For the Rollers, it was mostly a two-pronged effort from a couple of deadly shooters. Carleigh Patrick and Siarn Woods combined for 44 points in the defeat, doing all they could as the only two shooters on their side to record more than 40 per cent accuracy. Patrick was the top player with a game-high 23 points and equal game-high 13 rebounds, as well as a steal. Woods had 21 points, three rebounds, four assists and for steals.

The other Rollers player to hit double-figure points was Lilly Rotunno (10 points, two rebounds, one assist and three steals), while Sarah Ambrose picked up a handy seven points, seven rebounds, three assists two steals and did not have a turnover. Unfortunately there was not quite as much contribution across the board, though Kisha Lee had plenty of chances in her 15 minutes on court with five points and four rebounds, though only shot 2/10 from the field for a 20 per cent efficiency.

Unlike the other semi-final, there was no denying the winner in this one, as Logan Thunder dominated every single facet of the game on their way to a remarkable 62-point thrashing of Ipswich Force. The Thunder shot at a deadly 44.8 per cent from long-range, 50 per cent from two-point range and 81 per cent from the charity stripe as they notched up triple-figures. By comparison, the Force could only put together 12 of 64 as they had 14.3 and 20 per cent efficiency from the field.

The Force might have only had four more turnovers (14-10), but were outclassed across the board as the Thunder racked up 57 rebounds to 35, and 27 assists to right. They also won the blocks (7-1), steals (6-4) and were the only side to pick up second chance points (21-0) on their way to an impressive victory.

Five Thunder players amassed double-figure points, led by Mikayla Ruef‘s remarkable triple-double. She racked up 21 points, 18 rebounds – 14 defensive – 10 assists, one steal and one block without a turnover on the night. She was the clear best-on, while Chevannah Paalvast had 19 points, six rebounds and two assists in another big point-scoring effort for the win.

For the Force, just two players hit double-figure points and both were at 10, with Iris Cubit the top performer thanks to 10 points, seven rebounds and a block, while Rachel Mate had 10 points and two assists. Consistent performer Amy Lewis tried hard and picked up six rebounds and an assist on the night, but only managed six points in an inaccurate shooting performance of two from 14 from the field.

Catherine Macgregor also had the six points, sinking two of three triples on her way to the total as well as eight rebounds and one assist, while Georgia Ralph picked up six points of which four were free-throws. Grace Hughes did not get one of her five field goal attempts to land, but did record five rebounds – four off the offensive boards – in 10 minutes of court time. All in all it was a commanding win to the Thunder who are the clear title favourites in tonight’s grand final.