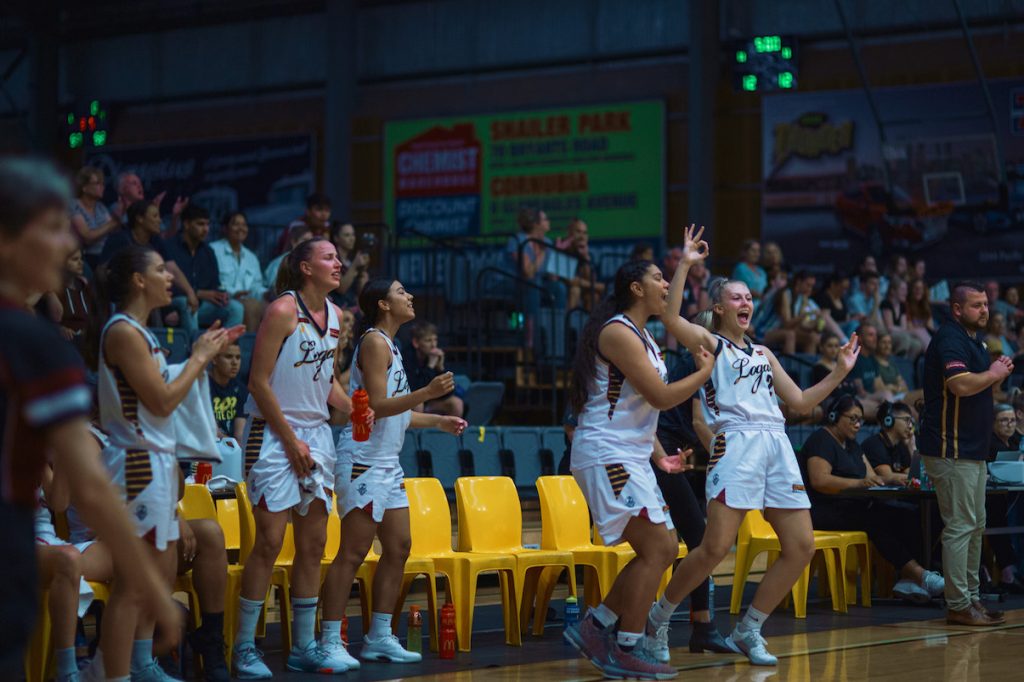 ROUND 9 of the Queensland State League (QSL) Women’s saw Logan Thunder keep their winning record intact as the Southern District Spartans created some ladder separation between them and Brisbane Capitals. Impressive performances from a couple of key players got their sides over the line with Ipswich Force star Amy Lewis having a day out recording a triple-double.

Sunshine Coast secured its third win of the season and did so in style against the higher ranked Northside Wizards. Accuracy seemed to be a main difference between the two sides as the Phoenix Teal capitalised on their opportunities to attack the rim finishing at 40 per cent from two-point range and an impressive 83 per cent from free throws. On the other hand the Wizards failed to find their stroke sitting at a lowly 34 per cent and 62 per cent respectively. Lack of discipline with ball in hand also cost the Wizards as they registered 20 turnovers to their opponents 13. Amy Brown proved to have a hot hand nailing 24 points and subsequently registering a double-double thanks to her 16 rebounds. She was a key influence for the Phoenix Teal throughout the match as Caitlin Clancy, Natalie Saunders and Ashleigh Frampton managed 12 points apiece in the win. For the Wizards, Regan Turnour-McCarty was the main contributor with 15 points as Saskia Gunness also hit the scoreboard with 10 points of her own and six rebounds.

The Spartans doubled the score of Rip City such was their dominance across the court. They outclassed Rip City in almost every facet of the game, boasting a 42 per cent accuracy from inside the paint while also making 11 of their 29 attempts from range. Rip City on the other hand only slotted four of their attempted three-pointers and sat at a 26 per cent clip. The turnovers was another major talking point as the Spartans only registered a mere 10 compared to their opponents’ 21 highlighting their ability to treasure possession. Although it was a disappointing outing, Maddison Rocci can once again hold her head high converting 24 points while also dragging down 11 rebounds, 10 of which were defensive. She was the sole Rip City player to register double digits as the next closest was Liisa Ups with seven points. The scoring was shared for Southern Districts as Kalani Purcell recorded a team-high 18 points along with 10 rebounds while Madelyn Willey also plied her trade to finish with 17 points, four assists and six rebounds in a consistent performance.

In their second game as many days, the Phoenix Teal could not repeat their earlier feats going down to the third placed Brisbane Capitals. Even in turnovers with 17 apiece, it was accuracy that did the talking as did the defensive acts of Brisbane. The Capitals contested every pass, attacking the hands and ball to pick up 12 steals along with seven blocks thanks to their ability to read the play and shot. In terms of rebounds the Capitals also had the wood over their opponents boasting 10 more finishing with 46 compared to the Teal’s 36. Three players managed double figures for the victors as Emma Read had an enjoyable day out with 16 points, three of them triples. Grace Champion also found plenty of the ball with 12 points while Madison Woodford fell just short of a double-double with nine rebounds and 10 points. Clancy was the lone hand for the Teal sinking a game high 22 points at an overall 31 per cent while Browne was the only other player to trouble the scoreboard with eight points but an impressive 14 rebounds.

The top of the table Thunder once again flexed their muscles with a dominant win against the struggling Gold Coast Rollers. Despite claiming a 27 point victory both sides were relatively evenly matched with the Rollers boasting a better three point and free throw percentage at 40 per cent and 67 per cent respectively however it was the limited amount of opportunities that cost them. Gold Coast put up a collective 70 attempts compared to the Thunder who put up 94 with their accuracy from inside the arc the area doing the most damage finishing the game at a 47 per cent clip. The Thunder had a wealth of options when streaming forward with Mikaela Ruef the most damaging of the lot recording a double-double thanks to her 17 rebounds and 22 points in another dominant performance. Ruef was not the only one to secure a double-double as her namesake Mikhaela Cann collected 19 points and 12 assists and fell just short of a triple double with eight rebounds. The next best contributor was Danielle Bayes who sunk 17 points while Carla Drennan managed 12 for the game. Kisha Lee topscored for the Rollers downing 13 points while Siarn Woods was hot on her feels with 12. The only other player to record double figures for the Rollers was Carleigh Patrick who walked away with 10 and seven rebounds.

Ipswich Force inflicted plenty of scoreboard pain on the Northside Wizards who failed to register a win in their two outings across the round. Only one win separates the two sides on the ladder but once again accuracy told the tale with the Force making the most of their chances sitting at 55 per cent compared to 38 from two-point range. In terms of turnovers the Wizards conceded eight more (13-21) while when it came to defensive efforts such as blocks and steals the Force had the upper hand winning both of those categories (6-3) and (14-8) respectively. Lewis not only found the basket with plenty of ease knocking back 25 points but so too racked up the assists and rebounds to record a triple double in the form of 25 points, 15 assists and 10 rebounds. Teammate Iris Cubit registered 20 points as Rachel Mate converted 14 points and Catherine Macgregor finished the game with a double-double thanks to her 12 rebounds and 13 points. Turnour-McCarty was the main scoring option for the Wizards amassing 19 points as Gunness and Molly Hogan chimed in for 14 and 13 points but it was not enough to trouble the scoreboard.

The final game of the round went to the Roar who just got over the line against the Seahawks in a close encounter. Both sides boasted a very similar stat line registering 18 turnovers apiece, (11-10) steals in favour of the Roar and (3-4) blocks going the way of the Seahawks highlighted just how tight the contest was. The only main difference was the rebounds as RedCity reigned supreme with nine more than their opponents 44-35. Four players reached double figures for the Roar with Ashleigh Karaitiana the main culprit collecting 23 points, seven assists and seven rebounds in an all-round impressive performance. Ajiah-Liric Siosiua-Pepe was the next in line when it came to scoring nailing 15 points while Lorna Shepherd shower her hand when it came to rebounds dragging down 12. Lauren Jansen found the rim with ease topscoring for the Seahawks thanks to her 19 points. She was aided by the likes of Emily Allen with 16 points while teammate Aimee Durbidge collected a double-double walking away with 10 rebounds and 14 points in her sides loss.