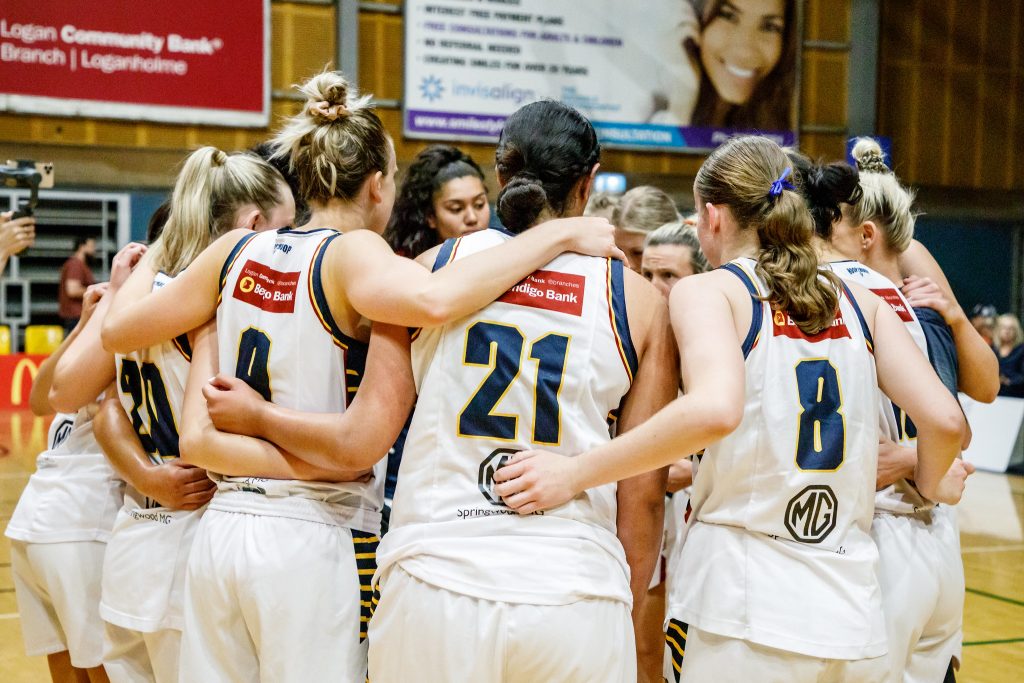 ROUND 8 of the Women’s Queensland Basketball League (QBL) saw a number of blowouts as the top teams flexed their muscles. Logan Thunder kept their undefeated streak intact thanks to Mikaela Ruef lighting up the court both in attack and defence while the Capitals created some separation between them and RedCity Roar.

It was a dominant performance to say the least for the Thunder who well and truly run rampant against the Mountaineers who simply had no answers. The Thunder seemed to have the ball on a string, exploiting Toowoomba in every which way with their ball movement, accuracy and scoring versatility. Logan had no shortage of options when it came to attacking the rim as five players reached double figures, testament to their ability to pass the rock around and inflict scoreboard pressure. It is hard to look past the efforts of Ruef who once again was influential for the winning side, recording a double-double thanks to an impressive 18 rebounds and 24 points not to mention her two steals and one block to cap off a solid outing. She was aided by Danielle Bayes who managed 19 points with her three-point shooting doing the most damage, finishing with four for the afternoon while Cassie Carroll’s hot hand did not go unnoticed sinking 13 points. For the Mountaineers it was the lone hand of Elaina Black that stood out, dropping a team-high 10 points as Tyler Courtney picked up eight rebounds in what was overall a disappointing performance.

The Gold Coast Rollers got the job done against the Wizards with their two-point and free-throw accuracy a key reason for their success. The Rollers made the most of their opportunities and most importantly were clean with ball in hand only registering a mere nine turnovers compared to their counterparts who amassed 20 for the game. The Rollers shared the scoring around as Kisha Lee and Sarah Ambrose popped up and nailed 12 points apiece with the latter also registering eight rebounds and three assists in her 30 minutes on court. Teammates Lilly Rotunno and Siarn Woods also plied their trade to get Gold Coast over the line with a combined 21 points. Regan Turnour-McCarty has plenty to be happy about despite her side going down by 16 points, notching up a double-double thanks to her 12 rebounds and 18 points while Saskia Gunness proved to be a menace on the scoreboard sinking 16 points for the match. Georgia McCarron also showcased her defensive trade picking up an impressive 12 rebounds, 10 of which were defensive  in the Wizards’ defeat.

Only 12 points separated both sides at the final buzzer but it was the Seahawks that got the chocolates against the Force in an intense battle. Neither side were particularly accurate when it came to shooting from deep sitting at 20 per cent and 32 per cent respectively but it was Ipswich’s persistent nature that eventually got them over the line.  Some big shooting performances also seemed to be the answer for the Force as the likes of Catherine Macgregor and Rachel Mate combined for 49 of their 77 points. Macgregor had a stats stuffing performance highlighting both her defensive and offensive attributes picking up nine rebounds, two steals and one block to accompany her game high 27 points. Georgia Ralph also featured heavily for the Force bringing down seven rebounds and 14 points. For the Seahawks Ella Brow did the heavy lifting when it came to scoreboard pressure with 16 points, as Lauren Jansen and Aimee Durbidge chimed in for 15 and 14 points apiece. Durbidge also managed 12 rebounds while Jansen displayed her strength with 18 rebounds of her own.

The fourth placed Roar made light work of the second last Pirates to run out with a 22-point victory. RedCity seemed to have answer for everything thrown at them and made the most of their chances. When it came to rebounds the Roar won the battle 56-42 and while the turnovers were close 15-18 they won that area too, giving them ascendancy across the board. A notable differential was between the assists as the Roar recorded 18 compared to South West Metro’s four. Ashleigh Karaitiana continued her dominant ways collecting another 19 points and eight rebounds in her sides win while Lorna Shepherd also managed to hit the scoreboard nailing 13 points with nine of those points coming through triples. Lauren Mansfield led the way for rebounds with nine as teammate Kayla Kiriau came close with eight of her own. For the Pirates Bree Farley topscored with 11 points while also reeling in eight rebounds in her 29 minutes on court. Both Telesia Manumaleuga and Amanda Beatson tried gallantly in a losing side.

The Spartans made scoring look easy as they dismantled Sunshine Coast Phoenix Teal’s defensive structures to claim a 44-point win. Accuracy seemed to be no issue for the Districts sitting at an impressive 100 per cent when it came to free-throws and above 50 per cent for both three-pointers and twos. On the other hand the Teal struggled to find their stroke, enabling Southern Districts to dominate. Teal were sloppy with ball in hand amassing 29 turnovers, 14 more than their opponents while the steals tally lent itself to the Spartans (27-10). Madelyn Willey starred once again knocking back a game-high 28 points along with seven rebounds and four assists. Willey was not alone though as Kalani Purcell also plied her trade on the scoreboard finishing with 21 points, four rebounds, six assists and a mind blowing 13 steals. Natalie Taylor and Holly Smith were also influential combining for 31 points in their convincing win. Amy Brown led the way for Teal falling just short of a double-double with nine rebounds and 19 points to her name while Caitlin Clancy recorded 15 points and five rebounds in the loss. Natalie Saunders also worked in overdrive collecting 10 rebounds while also dishing off seven dimes for the Teal.

In their second game of the round the Roar failed to have the same impact, going down to the Capitals by 41 points. It was a comprehensive performance by the third placed Capitals who ran the Roar off their feet. Sitting a third and fourth on the ladder the match did not really reflect their standings as Brisbane ran rampant. Poor decision making from RedCity cost them at stages throughout the game putting up 31 triples but only draining three. On the rebound front Roar were completely outclassed as Brisbane notched up a whopping 54-29. Five players registered double figures for the Capitals with Audrey Fuller leading all comers with 20 points. Hot on her heels when it came to points scored was teammate Meg Essex with 18 while she also racked up 13 rebounds. Georgia Woolley was influential in the win converting 15 points and collecting eight rebounds and five assists. Mansfield was the main avenue to basket for the Roar sinking 18 points and dragging down 10 rebounds along with eight assists as Karlene Kingi also had an influence with her 11 points. Karaitiana was kept quiet by her lofty standards only managing nine points and six rebounds.

The final game of the round saw the Thunder flex their muscles once again and prove why they sit pretty on top of the ladder. It was a completer performance from the Thunder who cruised a 47-point win thanks to their impressive accuracy and cleanliness with ball in hand. Despite losing the battle when it came to steals and blocks the Thunder dominated the rebounds against Rip City (40-67). It is no surprise that Maddison Rocci was the go-to girl for Rip City hitting three triples to  help make up her 25 points while also finishing with nine rebounds, three assists and three steals. Mekkija Redgard was the only player to reach double figures for UC with 11 points in what was a difficult outing for the eighth placed side. Ruef was the main source of pain for Rip City, as she added a whopping 33 points to the tally to go with her staggering 30 rebounds, 19 of which were defensive. Ashley Taia got busy for the Thunder sinking 10 points and amassing seven rebounds as Bayes and Mikhaela Cann sunk 11 points apiece in their thumping win.