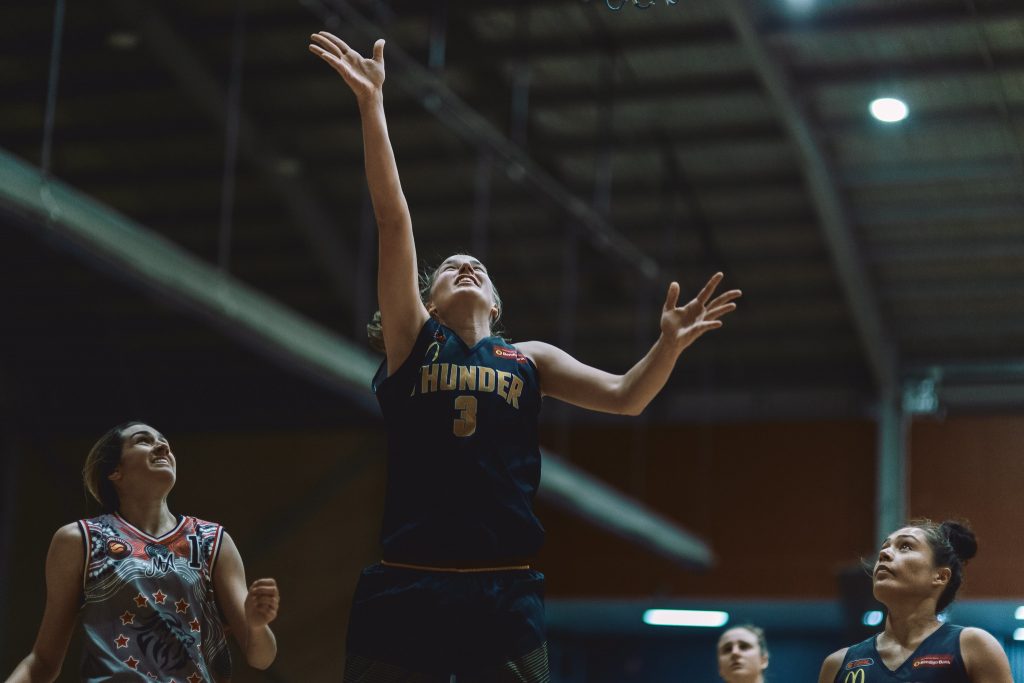 In the standalone game on Friday night, USC Rip City momentarily moved to 4-3 on the win-loss record with a tight eight-point win over Sunshine Coast Phoenix Teal. The home side only shot at 30 per cent from the field, but led the rebounds (51-37) and second chance points (12-6), with the assists and steals fairly even between the side. Maddison Rocci was a one-person scoring machine, dropping almost half of her side’s points in a 31-point, seven-rebounds, two-assist and three-steal game for USC. Layla Prince put up nine points as the next highest scorer, while Liisa Ups (10 rebounds, five assists) and Yasmin Miller (16 rebounds) were massive off the boards. For Phoenix Teal, Amy Browne was again the dominant shooter thanks to 23 points, nine rebounds and four assists, while Ashleigh Frampton (seven points, 12 rebounds, three assists and two steals) and Caitlin Clancy (seven points, six rebounds, two assists and three steals) were also prominent in defeat.

Unfortunately for USC, it was on the end of a tight loss the following day, going down to bottom four side, Ipswich Force in a shock loss on the road. It meant the Force moved to 3-4 for the season, one win behind the 4-4 Rip City. USC was more accurate in this match, shooting 43.3 per cent from two-point range and 33.3 per cent from outside the arc. It was just the Force’s marginally better accuracy from the field, and then a much higher free throw percentage (85 to 47 per cent) as well as winning the rebound (40-35) and assist (23-14) counts. Catherine Macgregor recorded 27 points, six rebounds, two assists and two steals in a strong performance, teaming up well with Rachel Mate (24 points, nine rebounds, four assists and two steals). In a strong starting team performance, Iris Cubit (17 points, 10 rebounds and four assists) and Amy Lewis (14 points, 10 assists and three rebounds) picked up double doubles. Rocci was once again the standout with 36 points, eight rebounds, six assists and two steals, while Upps had a double-double of 10 points and 10 rebounds.

It was a one-sided performance for top of the table Logan Thunder, as the undefeated side made light work of the mid-table North Gold Coast Seahawks. Triumphing by a huge 46-point margin, the Thunder was the far more accurate side, shooting at 55.1 per cent from the field compared to the Seahawks’ 31.4 per cent. Furthermore, the Thunder completely dominated the rebound count (62-25), as well as the assists (20-8), and second chance points (22-4), though the Seahawks had more blocks (6-3), steals (9-7) and less turnovers (13-16). Mikaela Ruef almost outscored the Seahawks herself with a monstrous 37 points and unheard of 32 rebounds – 14 offensive – in arguably the performance of the season. She was the difference between the sides in the end, with Ashley Taia (14 points, five rebounds and four assists) and Mikhaela Cann (10 points, four rebounds and eight assists) also prominent for the winners). Aimee Durbidge (17 points, four rebounds add two blocks) and Lauren Jansen (11 points, six rebounds, three assists, four steals and two blocks) were the standouts for the Seahawks.

Brisbane Capitals held off a determined Gold Coast Rollers in a top four clash to win by three points in a thriller and keep in touch with the top two sides. The Capitals bounced back from their loss to the Thunder the week before to win 57-54, courtesy of a dominant performance off the boards (51-32), and shooting at a slightly higher clip from the field. The Rollers’ ability to drop nine triples to five kept them in the game, as well as conceding less turnovers (16-20). Meg Essex (17 points, seven rebounds, two assists, two steals and three blocks) and Georgia Woolley (15 points, eight rebounds and four assists) led the way for the winners, while Anna Cameron impacted off the boards with eight points and 11 rebounds. Kisha Lee scored 24 points and 17 rebounds in a starring role for Gold Coast, as Carleigh Patrick (12 points, four rebounds, three assists and two steals) and Siarn Woods (10 points, two rebounds and four assists) were also busy despite the defeat.

In a predictable result that further piled on more pain for the last placed Toowoomba Mountaineers, Southern Districts Spartans ran out 70-point winners to maintain second spot on the QSL Women’s ladder. There was nothing close about this game, with the Spartans recording their biggest win of the season, with a plus-25 in rebounds (50-25), a plus-30 in assists (36-6), a plus-14 in steals (26-12) and a plus-12 in second-chance points (17-5). It was an even team performance across the board as Natalie Taylor topscored with 23 points, as well as three rebounds and four steals. Madelyn Willey (18 points, six assists and five steals), Kalani Purcell (11 points, nine rebounds, six assists, five steals and two blocks) and Holly Smith (12 points, five rebounds and six assists) also shone in the performance. For the Mountaineers, Tyler Courtney was the only player to reach double-figure points with 10, as well as three rebounds and two steals. Jaydan Thomson (seven points, six rebounds and two assists) and Jorja Bolton (seven points, three rebounds and two steals) both tried hard in defeat.

In an important road win, Northside Wizards moved to 4-3 with a 13-point win over South West Metro Pirates who sunk to a 1-8 season record despite a strong effort in defeat. The Wizards were accurate from long range, dropping 13 from 35, also controlling the rebounds (48-41) and steals (11-7). The Pirates won the assist count (22-20), but had eight more turnovers (19-11) which proved costly. Courtney Woods (26 points, seven rebounds, five rebounds and three steals) and Steph Reid (20 points, four rebounds, five assists, two steals and two blocks) were both busy on offence, while Regan Turnour-McCarty (15 points, nine rebounds and three assists) and Georgia McCarron (eight points, 10 rebounds and four assists) were strong off the boards. For the Pirates, Bree Farley led the way with a double-double (16 points, 11 rebounds and five assists), while Amanda Beatson (14 points, seven rebounds and four assists) and Telesia Manumaleuga (11 points, five rebounds) were both solid.

RedCity Roar moved up to outright fourth on the QSL Women’s table with an impressive 64-point win over the Mountaineers to hand the Mountaineers yet another defeat. The Roar are now 5-2 from this season’s record thus far, and controlled the boards (58-34), as well as the assists (30-13), steals (15-7) and second chance points (14-2). Ashleigh Karaitiana ran at an elite 71.4 per cent from the field, including 81.8 per cent from three-points range to drop nine triples on her way to a massive 40 points, 15 rebounds and six assists for the Roar. Jaylen Cooper (13 points, eight rebounds), Ajiah-Liric Siosiua-Pepe (13 points, eight assists) and Lauren Mansfield (11 points, eight rebounds, four assists and four steals) all came close to double doubles themselves. For the Mountaineers, Thomson recorded a team-high 13 points and six rebounds, while Despena Dickerson had 12 points, three rebounds and two assists in the loss.