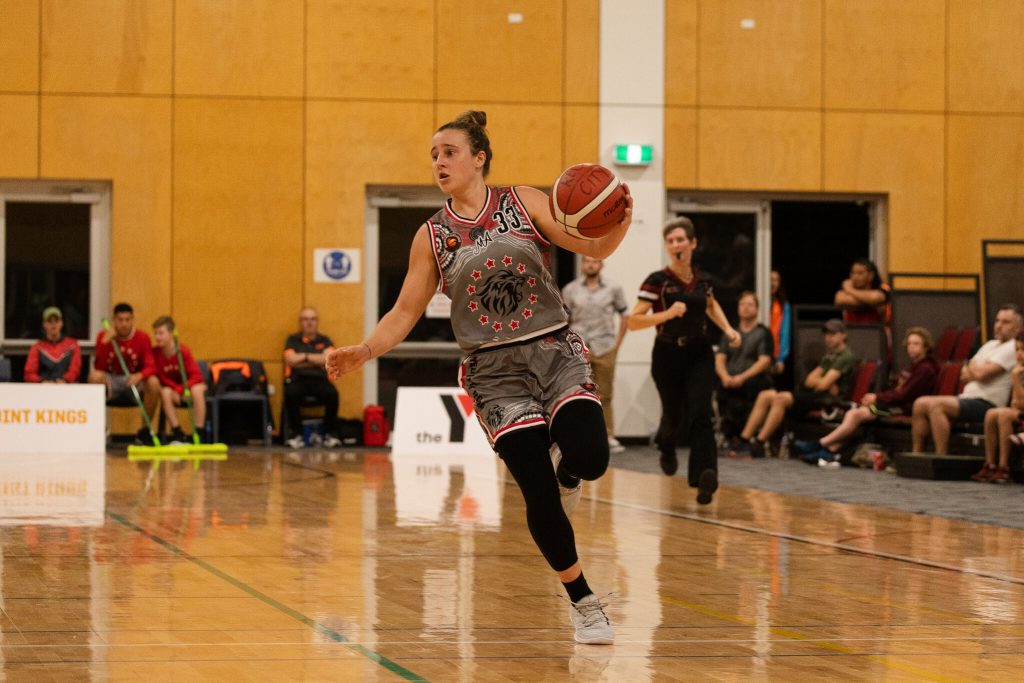 LOGAN Thunder’s unbeaten streak extended another week with a big win over second placed Brisbane Capitals, whilst Southern Districts Spartans moved up to second on the table in this round’s Queensland State League (QSL) Women’s Round 6 wrap.

It was billed as a top of the table clash, but Logan Thunder proved too strong for Brisbane Capitals, sending a message to the rest of the competition in a 39-point victory. The Thunder scored eight of 18 from long-range and more than 50 per cent from inside the arc, as the Capitals hit just 13.3 per cent and 32.3 per cent from those areas. The Thunder also dominated the assists 28-10, but the teams were fairly even across the board, with the shooting percentage being the key difference between the sides. Mikaela Ruef starred with 18 points, 12 rebounds, three assists and three steals, whilst her Thunder teammates in Mikhaela Cann (11 points, 14 assists and seven rebounds) and Danielle Bayes (18 points, two rebounds and one steal) were among seven players to hit double-figure points. For the Capitals, Madison Woodford top scored with 15 points, as well as five rebounds, three assists and four steals, while Meg Essex dropped 10 points, two rebounds, two steals and one block in the loss. Anna Cameron was prominent off the boards with 10 rebounds to accompany her eight points.

Southern Districts Spartans took full advantage of the Capitals’ loss by pouncing on the points against Ipswich Force. The Spartans won by 24 points, dominating the assists (36-18), rebounds (42-32), steals (14-7) and blocks (5-0). Both teams dropped 10 three-pointers, but the Spartans managed 33 makes from inside the arc compared to the Force’s 19. Kalani Purcell (28 points, 11 rebounds, four assists, two steals and three blocks) and Natalie Taylor (23 points, seven rebounds and four assists) led the way for the Spartans, while Rebecca Haynes was not too far off a triple-double thanks to 10 points, seven rebounds and eight rebounds. Amy Lewis (23 points, seven rebounds, six assists and two steals) and Catherine Macgregor (22 points, two rebounds, three assists and one steal) both racked up big numbers, whilst Iris Cubit achieved a double-double of 17 points, 13 rebounds and three steals.

Northside Wizards levelled out their season win-loss total with three wins from six games after a commanding 36-point triumph over the winless Toowoomba Mountaineers. The Wizards shot at 50 per cent from inside the arc, compared to a lowly 21.3 per cent from the Mountaineers, whilst dominating the assists (26-16), blocks (6-0) and steals (17-4), though the visiting side again matched it off the boards and won the overall count, 47-46. Courtney Woods was the standout from a scoring point of view, notching up a match-high 25 points for the Wizards, whilst also recording four rebounds, four assists and two steals. Steph Reid notched up an impressive 16 points, eight rebounds, seven assists and two steals not far off a triple-double, whilst Saskia Gunness was productive with eight points, seven rebounds, two assists, two steals and two blocks. For the Mountaineers, Rhiannon Phelan topscored with 18 points as well as three rebounds, while Jaydan Thomson had a game-high 15 rebounds – 13 defensive – in a huge effort off the boards.

The favourites got the job done on the road, but it was a hard fought victory for the RedCity Roar, moving to 4-2 this season with a 16-point triumph over Sunshine Coast Phoenix Teal. The Roar controlled play on the defence, notching up 13 steals to five, whilst making the most of their chances on offence, knocking down eight of 25 from long-range and 45 per cent from inside the arc, higher than their opponents. Phoenix Teal managed to only go minus one in rebounds and level in second chance points in what was a gallant effort. International duo, Ashleigh Karaitiana (21 points, five rebounds and two steals) and Lauren Mansfield (19 points, seven rebounds and six assists) were again dominant for the Roar, whilst Karlene Kingi had nine points and nine rebounds. For the Phoenix Teal, Amy Browne was a one-person scoring machine with 25 points and 13 rebounds, while Courtney Browne (nine points, four rebounds and four assists) was the next highest scorer.

In a battle between two of the lower ranked sides, North Gold Coast Seahawks came out on top by 15 points over South West Metro Pirates. Neither team was particularly accurate from longe range, combining for seven of 33, but it was the Seahawks’ 52 per cent from two-point range compared to the Pirates’ 35.7 per cent that made a difference. The Seahawks also had a plus 10 advantage in assists and plus five in rebounds, but the Pirates had four more steals and three more second-chance points. Emily Allen had a game-high 20 points, as well as seven rebounds, three assists and two steals for the Seahawks, combining well with Lauren Jansen (eight points, 10 rebounds, two assists and two steals) and Aimee Durbidge (nine points, six rebounds and two steals). For the Pirates, Allana Gerhardt (11 points, four rebounds) and Bree Farley (10 points, five rebounds, two assists and four steals) both reached double-figure points.