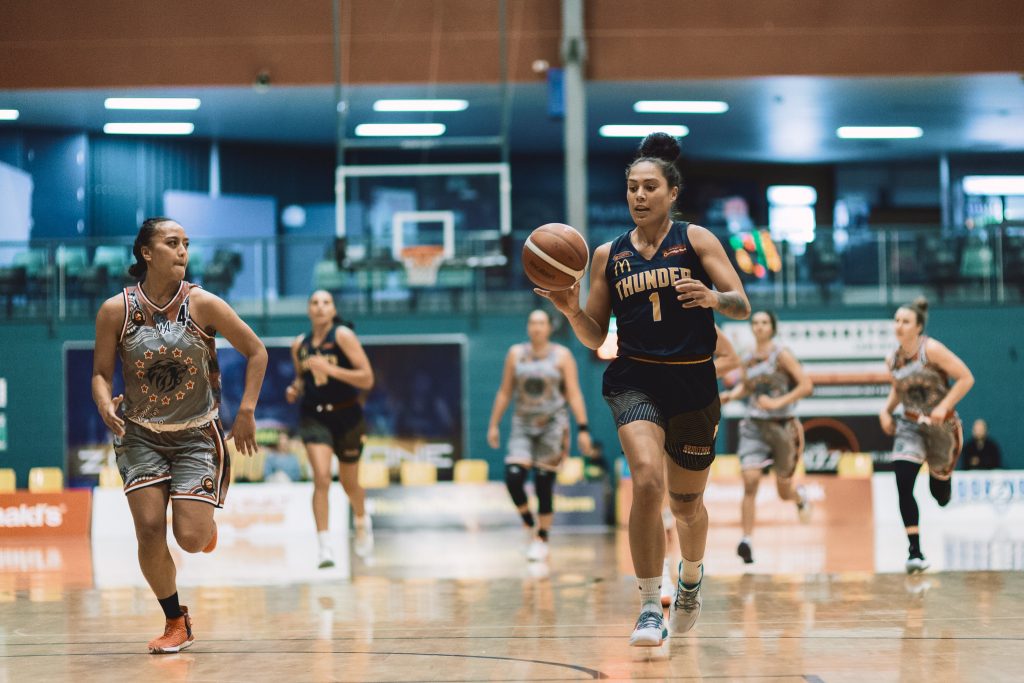 A TOP of the table Queensland State League (QSL) Women’s clash between Logan Thunder and Brisbane Capitals is our match of Round 6. In a weekend that features just five games – Gold Coast Rollers and USC Rip City have the bye – the undefeated Thunder and the 5-1 Capitals appear to be two of the clear standouts this season. With the 4-2 Rollers having the bye, the winner will move to six wins – two clear inside the top three – whilst the loser will likely slip to third with Southern District Spartans (5-1) also taking to the court on the weekend.

The Capitals are the home side, and after winning their first two games of the season, dropped the Round 3 clash against a Maddison Rocci-inspired USC Rip City. They bounced back the very next day with a punishing 65-point shellacking of the winless Toowoomba Mountaineer, a defeat which is rarely ever seen on a basketball court. They escaped with a one-point win over Northside Wizards and then comfortably took care of North Gold Coast Seahawks to sit with an average score of 78.7 points, the third most in the competition, whilst only conceding 58.8 points, ranked second overall.

The only problem is their opposition is ranked number one, and while the Thunder do have a game in hand (5-0), they have only allowed a measly 53 points per game this season. In the past two weeks, they have conceded just 67 points combined, whilst piling on 173 themselves. With an average of 87.4 points per game, the Thunder are ranked second on offence – behind the Spartans – but also accounted for the Spartans 76-61 three weeks ago. That result was their only score below 80, as they have achieved scores of 89 (once) and 94 (twice) to give an indication of how potent they are on attack.

What makes the Thunder so damaging is their ability to share the load on the scoring end. Mikaela Ruef is the star of the show, with 18.6 points, 14.6 rebounds and 2.2 assists. But the opposition cannot afford to just try and shut her down, as the likes of Ashley Taia (11.8 points, 4.0 rebounds and 2.0 assists), Mikhaela Cann (11.6 points, 4.8 rebounds and 5.2 assists) and Chevannah Paalvast (11.4 points, 5.4 rebounds and 2.4 assists) are more than capable of putting up big numbers. Ruef also leads the steals count for the Thunder with 3.0 per game, and blocks with 1.2 per game showing she has an all-round attitude.

The Capitals also like to share the points around, with Georgia Woolley having the most points on the court in this match, dropping 19.0 points, 9.7 rebounds and 2.7 assists per game. Madison Woodford is not far behind with 13.8 points, 5.8 rebounds and 3.6 assists, while Meg Essex (13.6 points, 8.4 rebounds) and Anna Cameron (10.0 points, 6.0 rebounds) have been huge off the boards. Essex in particular has a huge job because she leads the league in blocks. In by leading the league, she is double the next highest blocker in the competition, averaging 2.4 blocks per game. Likewise, Woodford and Woolley are both strong on defence, with Woodford averaging 4.0 steals per game, and Woodford 3.3.

The Thunder head into the game as favourites, but the Capitals are just as strong defensively, so it will be a fascinating contest to watch.

In other games over the weekend, Steph Reid and the Northside Wizards will look to square their season ledger at three wins from six games when they welcome the Toowoomba Mountaineers to town. The last placed Mountaineers have struggled this season, and trying to contain the second highest scorer this season will be a challenge. Meanwhile the other bottom three sides face off in the 1-6 11th placed South West Metro Pirates hosting the 10th placed North Gold Coast Seahawks (2-4). Lauren Jansen is enjoying a good season off the boards for the Seahawks and will be looking for that to continue against Bree Farley and her Pirates.

In the other games, the damaging duo of Ashleigh Karaitiana and Lauren Mansfield will look to bring home another win to the RedCity Roar and keep in touch with the top few teams when they travel to take on Amy Browne and the Sunshine Coast Phoenix Teal. Meanwhile seventh placed Ipswich Force led by Amy Lewis (24.0 points per game) locks horns with the 3rd placed Spartans with Madelyn Willey (23.2 points per game) enjoying a strong season.