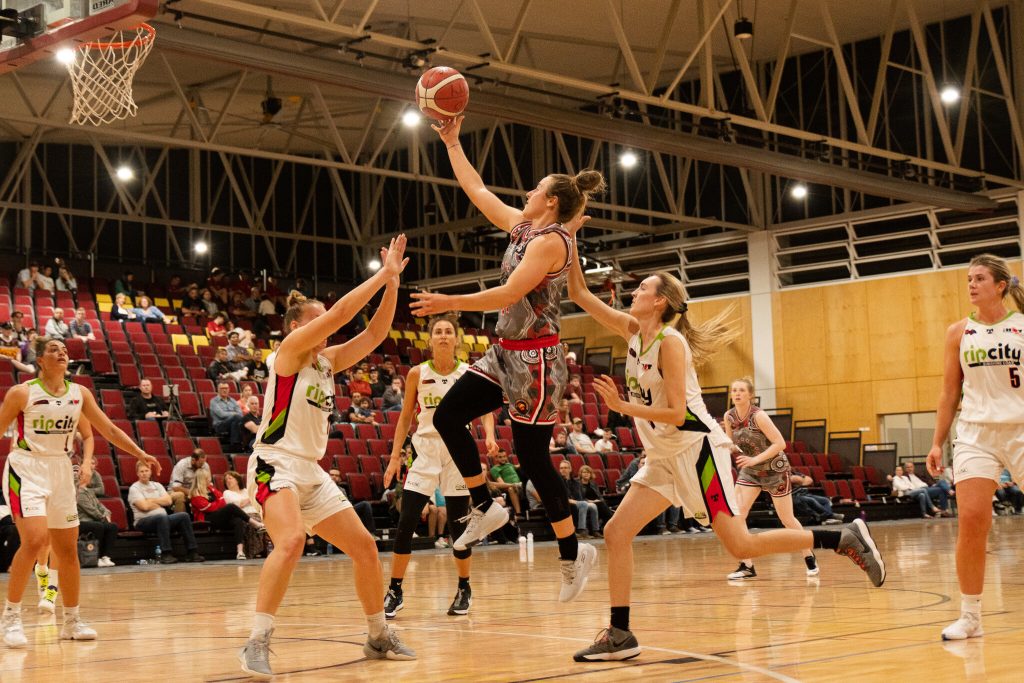 REDCITY Roar have won an 11-point thriller over fellow mid-table side USC Rip City, while Ipswich Force have jumped to seventh with a vital win over last placed Toowoomba Mountaineers. In other results, the top four sides all collected wins to sit a win clear of the fifth and sixth placed Roar and Rip City.

Brisbane Capitals ensured they maintained their strong start to the season with an important 19-point triumph over the 2-3 North Gold Coast Seahawks. The Capitals moved to 5-1 on the table after the 83-64 victory, dropping seven triples and controlling the rebound (46-30) and second chance points (23-5) counts. They also picked up seven blocks to two and 14 steals to five, whilst the Seahawks matched the Capitals in assist numbers (minus one). Georgia Woolley picked up 14 points, six rebounds, two assists and three steals in a strong all-round performance, as Anna Cameron (13 points, eight rebounds and two assists) and Emma Read (14 points, three rebounds and two steals) were also prominent, the latter dropping four of six from long-range. For the Seahawks, it was Lauren Jansen (16 points, nine rebounds and five assists) and Aimee Durbidge (14 points, seven rebounds, two assists and three steals) who did all the scoring damage.

The Force were able to leap past three other sides on their way up to seventh on the table, sentencing Toowoomba Mountaineers to a sixth straight loss to open the season. The 30-point win was impressive for the home fans who moved to 2-3 on the table, off the back of a commanding playmaking performance. The Force led the assists (24-13) and steals (29-15), whilst the Mountaineers were able to work the boards for a plus 11 advantage (55-44), as well as have an extra second chance point. Amy Lewis was the difference between the sides, dropping 27 points, 11 rebounds, seven assists and eight steals in a massive performance. She managed four of eight from three-point range, the same as teammate, Catherine Macgregor who put up 15 points, two rebounds, two assists and five steals, while Tiayana Sing also reached double-figure points with 16, as well as three rebounds. Jaydan Thomson led the points for the Mountaineers with 11, as well as eight rebounds, but it was Tyla Stolberg (10 points, 13 rebounds) and Kaila Gabriel (seven points, 12 rebounds, seven assists and nine steals) who produced massive efforts.

Southern Districts Spartans maintained third spot with an important 23-point win over Northside Wizards on the road. The Wizards slipped to a 2-3 record this season, while the Spartans moved to an impressive 5-1 ratio from an extra game. The Spartans dominated the rebound (56-36) and assist (29-11) counts, but it was even across the board elsewhere as both sides ran at under 30 per cent from outside the arc, and under 50 per cent from inside it. Madelyn Willey scored 22 points, eight rebounds, three assists and three steals to be the equal top scorer in the game, while her Spartans teammates such as Natalie Taylor (19 points, eight rebounds, six assists and two steals), Rebecca Haynes (11 points, 14 rebounds, three assists and two steals) and Kalani Purcell (13 points, 10 rebounds and eight assists) all reached double-figure points, the latter two double doubles. For the Wizards, Steph Reid dropped 22 points as well as four rebounds and four assists, while Courtney Woods (14 points, eight rebounds and three steals) and Regan Turnour-McCarty (10 points, six rebounds, two assists and two steals) were also prominent.

Logan Thunder flexed their muscles against Sunshine Coast Phoenix Teal, in one of the most convincing victories of the year. The top of the table Thunder piled on 84 points whilst keeping the Phoenix Teal to just 28 for the match, dominating every facet of the game, from made field goals (34 to 11), assists (25-10), rebounds (56-36), steals (19-4), blocks (7-1) and second chance points (17-3). Whatever way you look at it, the Thunder had a convincing win and showed why they are early title favourites. Mikaela Ruef had an outstanding performance to pick up a double-double courtesy of 18 points, 14 rebounds, two assists, four steals and three blocks. She did it all, but was well aided by the likes of Chevannah Paalvast (15 points, eight rebounds) and Danielle Bayes (15 points, five rebounds, four steals and three blocks) on the scoring end, and the playmaking abilities to Mikhaela Cann (six points, eight rebounds, 12 assists and two steals). For the Phoenix Teal, Ashleigh Frampton recorded a team-high eight points, while Caitlin Clancy was the only other player with more than two points, picking up seven as well as three rebounds and two assists.

In the tightest battle of the weekend, RedCity Roar moved ahead of USC Rip City thanks to a game in hand, getting up by 11 points in a battle of the mid-table sides. Both teams have now had the three wins, with the former only having two losses to three, and were able to win on the back of second chance points (28-9). The Roar also won the rebound (58-49), assist (14-10) and steal (8-3) counts, while USC had the higher accuracy from the field (41.8 to 34.3 per cent). The damaging duo of international talents, Lauren Mansfield and Ashleigh Karaitiana were able to combine to hold off another sensational one-shooter effort from Maddison Rocci. Karaitiana racked up a double-double of 25 points, 16 rebounds – 12 offensive – and four rebounds, while Mansfield was not far behind with 28 points, nine rebounds, five assists and three steals. For USC, Rocci had a hot hand all night with 45 points and 13 rebounds, shooting at 50 per cent from the floor including 60 per cent from inside the arc. The Roar’s Lorna Shepherd (13 points, nine rebounds) and Rip City’s Yasmin Miller (10 points, 10 rebounds) were others who shone on the day.

In the standalone Sunday game, Gold Coast Rollers moved to to outright fourth with USC’s loss, defeating the bottom two South West Metro Pirates by a whopping 37 points to move to a win-loss record of 4-2 this season. The Rollers shot at a much higher clip, including 37.5 to 16.7 per cent from outside the arc, and 47.5 to 32.4 per cent from inside it. They won the assist (21-10), rebound (50-28), steal (11-9) and second chance point (12-10) battles, whilst had seven less turnovers (13-20). Kisha Lee was clear best on court with 18 points ,12 rebounds and three assists on her way to a double-double for the Rollers. Also strong for the winning side were Sarah Ambrose (13 points, eight rebounds, three assists and two steals) and Carleigh Patrick (18 points, three rebounds and two steals). For the Pirates, Amanda Beatson was a lone-hand on the shooting front with 16 points – including six from nine from the field – as well as five rebounds. The next highest scorer was Savannah Au with seven points, four rebounds and two assists.