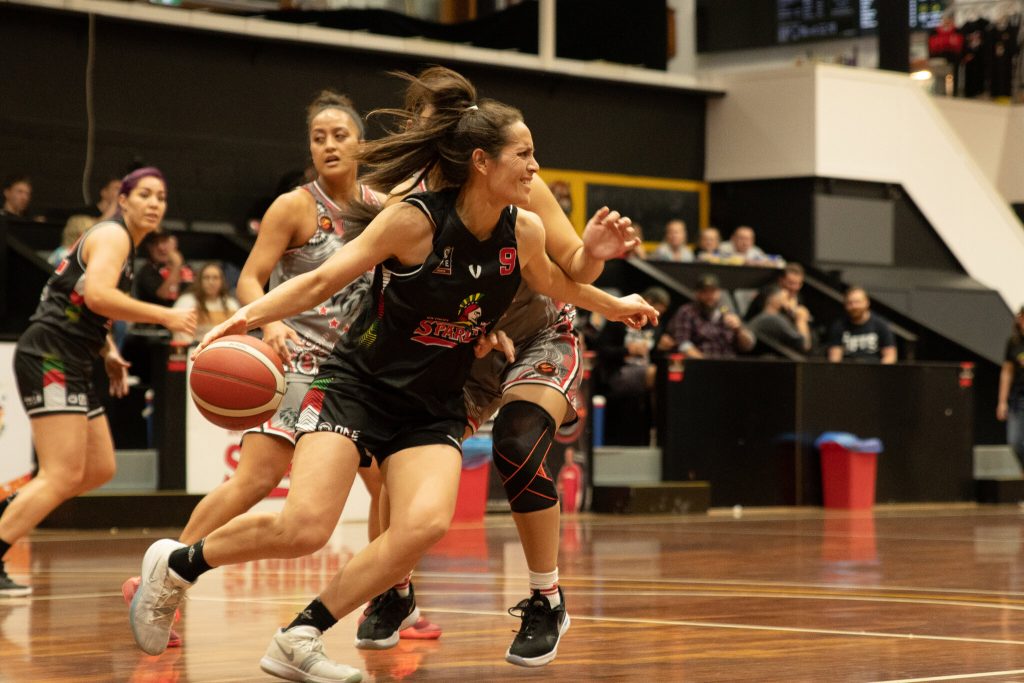 LOGAN Thunder showed no mercy during back-to-back wins totalling 88 points on the weekend, defeating bottom three sides Ipswich Force and South West Metro Pirates in Round 4 of the Queensland State League (QSL) Women’s competition. Meanwhile Brisbane Capitals edged ahead with a 4-1 record thanks to a nail-biting one-point win over Northside Wizards, while Sunshine Districts Spartans bounced back from a loss with a 31-point victory over RedCity Roar.

The opening game of the round between top three sides, Brisbane Capitals and Northside Wizards lived up to the hype with just one point separating the sides at the final buzzer. The teams were evenly matched throughout with the home team having more rebounds (48-42), and the Wizards recording more assists (18-12). Otherwise there were fairly balanced with Brisbane’s 13 second chance points to Northside’s eight another telling stat. Georgia Woolley led the way for the home team with 25 points, 12 rebounds and five steals as the match-winner, shooting at 52.6 per cent from the field. Grace Champion also amassed 16 points and a couple of steels, while Madison Woodford had a balanced match with six points, eight rebounds, four assists and four steals. For the Wizards, four players spent the full 40 minutes on court, as Courtney Woods (18 points, eight rebounds and four assists), Steph Reid (18 points, nine assists, five rebounds and four steals) and Georgia McCarron (eight points, 15 rebounds and three steals) all came close to double doubles.

Logan Thunder tipped off its weekend right with a 38-point win over Ipswich Force. While at the time of publishing, full statistics for the game were yet to be confirmed, Mikaela Ruef racked up 22 points, one of four players to reach double-figures for the Thunder. Ashley Taia (19 points), Mikhaela Cann (16) and Chevannah Paalvast (14) all had big days out. The Force had a number of big scorers but less overall contributors, as Amy Lewis (16 points) led the way, ahead of Rachel Mate (12) and Catherine Macgregor (11).

Moving one win ahead of their rivals albeit with a game extra, the Gold Coast Rollers got past Sunshine Coast Phoenix Teal in a 16-point victory on the road. The Rollers were not as accurate as they would like to be, shooting 6/30 outside the arc compared to Phoenix Teal’s 6/11, but the high volume shooting eventually won out, along with their plus two in rebounds, plus seven in steals and plus eight in second chance points. It was not all doom and gloom for the losers though, winning the assist count, 17-15. Lilly Rotunno had a game-high 18 points to go with four rebounds, four assists, four steals and a block, while Carleigh Patrick (17 points, nine rebounds) came close to a double-double. Also reaching double-figure points, Kisha Lee (14 points, three rebounds and two steals), Sarah Ambrose (11 points, eight rebounds and three assists) and Siarn Woods (10 points, four rebounds, two assists and two steals). Amy Browne had a day out with a double-double in a losing effort, putting up a healthy scoreline of 21 points, 11 rebounds, three assists, two steals and one block, aided by Natalie Saunders (12 points, five rebounds, five assists and two steals).

Southern District Spartans won its first of two games over the weekend, rolling past North Gold Coast Seahawks who picked up their third loss of the season to go 1-3. Neither side was particularly accurate shooting the three ball with the Spartans two from 15 and the Seahawks none from 10, though were a little more accurate from inside the arc. The Spartans led in the rebounds (43-40), assists (19-9), steals (13-12) and second chance points (16-10), and had four less turnovers (17-21) to be deserving winners on the day. The Spartans had a multitude of big scores, as Rebecca Haynes (21 points, nine rebounds, four assists and two steals) was prominent, with both her and Kalani Purcell (14 points, nine rebounds, three assists and two steals) narrowly missing out on double doubles. Holly Smith was also prolific with 17 points and four rebounds. For the Seahawks, Aimee Durbidge had a team-high 14 points as well as four rebounds and three assists, but it was Lauren Jansen who helped herself to the only double-double of the game (11 points, 11 rebounds). Emily Allen (seven points, 11 rebounds, three assists and three steals) also had a chunk of the play.

USC Rip City moved into fifth place on the QSL Women’s table after Round 4 with a strong 16-point win over South West Metro Pirates. USC dropped nine triples on the night, and dominated the rebounds (58-36), as well as second chance opportunities (17-7), though the assists (16-15) and turnovers (16-16) were even. Maddison Rocci was a star once again for USC nailing five triples at 35.7 per cent accuracy – for a total of 32 points – as well as 15 rebounds, three assists and three steals. Layla Prince chipped in with 21 points and nine rebounds, while Liisa Ups had 12 points, 11 rebounds and six assists in the win. For the Pirates, Amanda Beatson also picked up a double-double with 10 points and 12 rebounds, while Telesia Manumaleuga had a productive 12 minutes on court, racking up an equal team-high 10 points, as well as three rebounds and one assist.

After a loss the day before, North Gold Coast Seahawks bounced back with a big win over the winless Toowoomba Mountaineers, improving their win-loss record to 2-3 from five games. The Seahawks won by 34 points doubling the Mountaineers score in a good defensive effort, and controlling the boards (47-37) and steal (15-6) counts. The assists were fairly even (12-11 in the Seahawks favour), though the Mountaineers were clumsy with the ball, committing 27 turnovers to the Seahawks’ 14. Jansen starred with 13 points and 13 rebounds, while Indiah Bowyer (13 points, four rebounds and two steals) and Jasmine Hunter (12 points, four rebounds) were also prominent on the scoresheet. For the losers, Tyla Stolberg and Rhiannon Phelan both had 11 points and combined for 13 rebounds, while Phoebe Hinz put up eight points as the next highest scorer.

The Thunder won its second game of the weekend with a massive 50-point shellacking of South West Metro Pirates. The Thunder dropped 11 of 33 from long-range, and had a 47.1 per cent accuracy from inside the arc. Logan controlled the boards with more than double their opposition’s rebounds (61-30), and had 21 second chance points to two. Their assist numbers were also through the roof (28-11), while their steals (14-8) and blocks (4-0) were also ahead making it a comprehensive win. Ruef was simply dominant, racking up 11 points and 16 rebounds – six offensive – in a big day out for the Women’s National Basketball League talent. Taia backed up her impressive first game efforts with another big match, finishing the game with 18 points, seven rebounds and five assists, while Danielle Baynes (13 points, five rebounds) was prominent for the winners as well. Bree Farley was a lone-hand on the scoring front for the Pirates, notching up a double-double of 17 points and 10 rebounds, while Awhina Axam (eight points, two rebounds and two assists) tried hard in a losing side.

Southern Districts Spartans went back-to-back over the weekend with another good win, this time over RedCity Roar. The Spartans won by 31 points in a commanding performance, shooting at 38 per cent from three-point range, and almost 50 per cent from inside the arc. They won the rebounds (40-34), assists (26), second chance points (14-11) and steals (13-12), while the Roar won the blocks (5-3), but had five more turnovers (22-17). Madelyn Willey had a match to remember with 29 points, four rebounds, five assists and four steals, while Natalie Taylor notched up a double-double of 15 points, 12 rebounds and nine assists, falling one short of a rare triple-double. Purcell (17 points, nine rebounds, five assists and four steals) and Smith (10 points, three rebounds) also had strong games. For the Roar, Lauren Mansfield was the standout putting up 24 points, seven rebounds and six steals, while Ashleigh Karaitiana (11 points, 10 rebounds) had a double-double and Kayla Kiriau (eight points, 12 rebounds) was superb across the court.