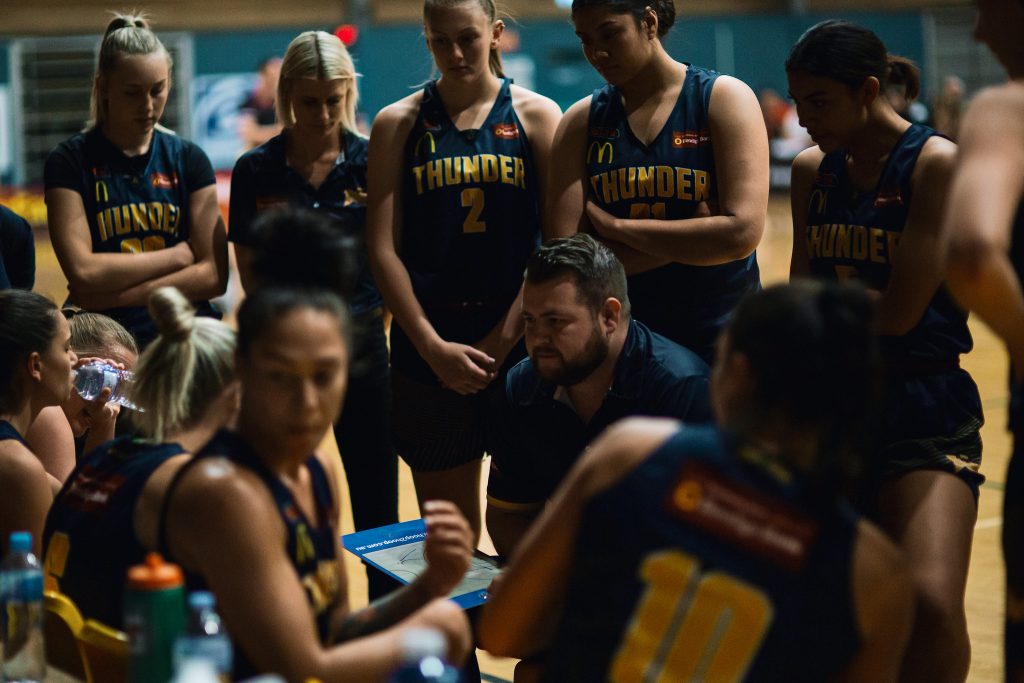 LOGAN Thunder became the sole undefeated side in the Queensland State League (QSL) Women’s competition after their second straight win from three rounds. The Sunshine Coast Phoenix Teal, Southern District Spartans and Brisbane Capitals all lost their first games of the seasons over the weekend.

USC Rip City handed the previously undefeated Brisbane Capitals by 12 points in an impressive performance on Friday night. The home side had a lot more opportunities and sunk nine triples to Brisbane’s two, and while their accuracy from inside the arc was not as strong (34.7 per cent), they were plus six in offensive rebounds, but minus nine in defensive rebounds. Maddison Rocci had an enormous game, hauling her side across the line with a double-double effort of 36 points – at 48 per cent – including 4/11 from long-range, 11 rebounds and three assists. Bianca McDonald (11 points, three rebounds and two steals) and Katherine Ups (10 points, four rebounds, four assists and three steals) also hit double-figure points. Madison Woodford (14 points, five rebounds and two steals), Meg Essex (14 points, four rebounds and a massive seven blocks) and Georgia Woolley (13 points, five rebounds, three assists and four steals) were all busy for the Capitals.

The Capitals bounced back from a disappointing Friday night to take their anger out on Toowoomba Mountaineers, smashing the Mountaineers by 65 points in a one-sided shellacking. The Capitals had 96 attempts to 58 and won by the sheer high volume of shots put up, but also had a whopping 25-3 steals, as well as 51-29 rebounds and 27-8 second chance points. Woolley led the point-scoring with 24, as well as 12 rebounds, five assists and two steals, while Grace Champion (19 points, two rebounds), Woodford (18 points, three rebounds, three assists and eight steals) and Essex (14 points, six rebounds) were all busy. Tyla Stolberg was a lone hand on the attacking end, shooting 16 points with four rebounds and two assists. Rhiannon Phelan (nine points, two rebounds) and Kaila Gabriel (eight points, three rebounds) were the only other players to record more than three points for the visitors.

RedCity Roar took out a win on the road with a 13-point victory over Gold Coast Rollers. The Roar were more potent on offence, shooting at 33 per cent from three-point range compared to 12 per cent, whilst shooting 45 to 37.5 per cent from inside the arc. They had a few too many turnovers (19-12), but had 14 more rebounds. Lauren Mansfield was prominent with 17 points, six rebounds, five assists and two steals, while Ashleigh Karaitiana (14 points, 17 rebounds) was best-on, and Lorna Shepherd (12 points, two rebounds) also hit double-figure points. Carleigh Patrick (19 points, 13 rebounds) hit the double-double mark in the loss, while Siarn Woods (11 points, three rebounds and eight assists) also reached double-figure points.

North Gold Coast Seahawks’ win over Sunshine Coast Phoenix Teal showed just how even the competition is this season as the Seahawks grabbed their first win, and handed Phoenix Teal their first loss in 2020. It was the shooting from inside the arc that was the high differential with the Seahawks at a (still low) 38.5 per cent, compared to their opponents 29.3 per cent, just 12 makes from 41 attempts. The Seahawks had nine more rebounds, 10 more assists and seven more double chance points to be the better side on the night. Ella Brow delivered a match-high 18 points, while Lauren Jansen (16 points, seven rebounds, seven assists and three steals) starred, and Emily Allen (12 points, five rebounds and three assists) also reached double-figure points. Phoenix Teal had three players collect 13 points, with Amy Browne (eight rebounds, six assists and three steals) the most prolific, while Ashleigh Frampton (four rebounds, two assists, two steals and three blocks) and Caitlin Clancy (two rebounds, two steals) also provided good assistance.

Logan Thunder grabbed outright first spot on the QSL ladder with a game in hand thanks to a 15-point victory over fellow undefeated side, Southern District Spartans. Led by a couple of star players, the Thunder were more clinical from the field, shooting 23/51 to the Spartans’ 12/41, though Logan’s free-throw shooting left a lot to be desired with just 9/19. Their rebounding (57-39) was the difference, and thus their second chance points (34-20) was what really separated the teams. Mikaela Ruef made a meal of her opposition, dominating off the boards with a ridiculous 20 points and 24 rebounds as well as five steals. Her 10 offensive rebounds equalled the total rebounds of the next highest player in her teammate, Mikhaela Cann (26 points, 10 rebounds, four assists and three steals). The duo produced 73.7 per cent of their team’s points, while it was a similar story for the Spartans with Natalie Taylor and Madelyn Willey. Taylor (19 points, seven rebounds and two assists) and Willey (19 points, four rebounds, five assists and three blocks) had part in 62.3 per cent of their team’s points.

Northside Wizards got away with an impressive five-point triumph over USC Rip City as two of the competition’s best players in Rocci and Steph Reid went head-to-head. The pair combined for 76 points, 16 rebounds and 12 assists on opposite teams, with both teams sinking double-digit triples thanks to the long-range shooters. Overall the Wizards were more proficient across the court, making the most of their less opportunities. Rip City won the rebound battle (52-39) and second chance points counts (11-6), though the Wizards were ahead in the assists (19-18), steals (6-5) and blocks (3-1) all marginally. Reid won the head-to-head battle with a competition-high 44 points, six rebounds, eight assists and three steals, shooting at 43.3 per cent from the field, including 6/14 from long range. Rocci had 32 points, 10 rebounds, four assists and one steal in a losing side, but produced 3/8 from three-point range and had a more accurate 46.4 per cent from the field. In terms of their teammates, Reid had better support from the next two shooters. Courtney Woods (26 points, eight rebounds and three assists) and Regan Turnour-McCarty (19 points, seven rebounds and three assists) both were strong, as Katherine Ups (21 points, five rebounds and three assists) and Liisa Ups (14 points, six rebounds and eight assists) both hit big numbers for Rip City.

In a more one-sided contest, Ipswich Force grabbed its first win of the season to leap up to ninth and surpass a disappointing South West Metro Pirates team that moved to a 1-3 win-loss record. The Pirates were blown away by the visitors in a huge 52-point loss, as five Force players recorded double-digit points on the day. A dominant assist count (35-8) and one-sided rebound count (51-27) told the story, with the visiting team also winning the blocks (3-1), steals (14-11) and second chance points (19-11). Amy Lewis had a double-double day out and almost picked up a triple-double after 22 points, 12 rebounds, eight assists and five steals, level with Rachel Mate on points as she racked up 22 herself to go with seven assists and four rebounds. The other key playmaker for the Force was Georgia Ralph (20 points, five rebounds and seven assists), while Catherine Macgregor (16 points, six rebounds and two assists) played her part in the big win. In a day to forget, both Courtney Taylor (14 points, eight rebounds, three assists and two steals) and Awhina Axam (12 points, three rebounds and three steals) were solid to hit double-digit points.