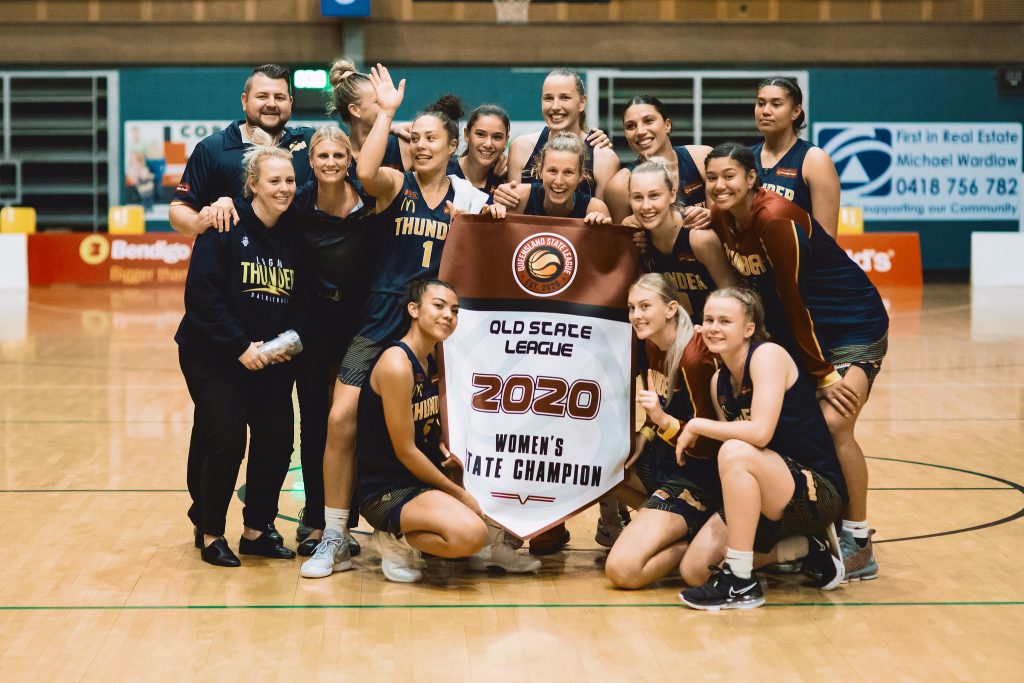 MIKAELA Ruef and the Logan Thunder have completed an unbeaten season by triumphing in the Queensland State League (QSL) Women’s competition, defeating Southern Districts Spartans in the grand final by 24 points (85-61). In what was a memorable performance from both Ruef and her opposing star Kalani Purcell who both racked up ridiculous numbers, it was always looking like going the way of the Thunder.

Heading into the game Logan won all 12 of its matches, whilst Southern Districts was not far behind winning all bar its clash with the Thunder earlier in the season, making it a worthy grand final adversary. Coming off a 62-point shellacking of Ipswich Force, the Thunder were heavy favourites in the game, but as the Spartans showed early, they were up for the fight. Both teams were level at 19 points apiece at quarter time and it was looking like being a beauty.

By half-time though, the Thunder did what they have done all season and created some separation on the scoreboard, pouring on 33 points to 17 to hold a 52-36 advantage. By that stage, Ruef had already picked up a double-double thanks to 13 points and 11 rebounds and was the clear difference in the match. The third term was even, with the Thunder slightly increasing their lead out to 18 (68-50), but time was quickly running out. In the end, a lower scoring final term of 17-11 completed what was not only a memorable game, but a memorable season for the Thunder in the 85-61 triumph.

The Thunder’s accuracy was key in the win, dropping 10 of 25 triples at 40 per cent accuracy, whilst also managing a 44.7 efficiency from inside the arc. By comparison, the Spartans only hit 27.8 and 31.6 per cent of their shots from those ranges, though had marginally more success at the charity stripe (76.9 to 68.4 per cent). Statistically the match was fairly even with both sides recording 40 rebounds, and Spartans actually ahead in the assists (22-20). The Thunder led the other stats marginally, such as the blocks (4-3), steals (7-3) and second chance points (11-10), but it was just converting their chances that ultimately helped them grab the win.

Ruef knocked down 27 points and a ridiculous 25 rebounds – 21 defensive – as well as five assists, three steals and two blocks playing nearly every minute in a huge match. She led the way for her side, whilst Mikhaela Cann was the dominant playmaker, picking up eight assists to go with her 13 points, two rebounds and one steal, though her accuracy of 28.6 per cent from the field meant she could have had even more points by the final buzzer..

Cassie Carroll had no problems with accuracy, knocking down six triples from eight attempts on her way to an 18-point game in 29 minutes, also recording two rebounds, two assists and one block for her troubles. Ashley Taia had 11 points and the second most rebounds on her side with six, as well as three assists and one steal. Meanwhile the other key player was Chevannah Paalvast who ran into a little foul trouble with five fouls, but still managed the 10 points, two steals, one rebound, one assist and one block in the win.

Purcell was the clear star for the Spartans, picking up team-highs in the three major stats. Boasting a triple-double in a losing side there was not much more the Melbourne Boomers talent could have done, finishing with 22 points – including four triples from five attempts – 17 rebounds and 10 assists. Madelyn Willey also performed strongly with 16 points, three rebounds, six assists, two steals and a block, though would have liked to have been more accurate with just six of 21 from the field at 28.6 per cent accuracy.

The other double-figure scorer was Holly Smith who managed 10 points and a rebound, while Natalie Taylor (four points, six rebounds) and Rebecca Haynes (six points, four rebounds, two assists and one block) played roles in the defeat. In the end though the weight of numbers was too great and the depth of the Thunder capped off what was a marvellous year for Logan.