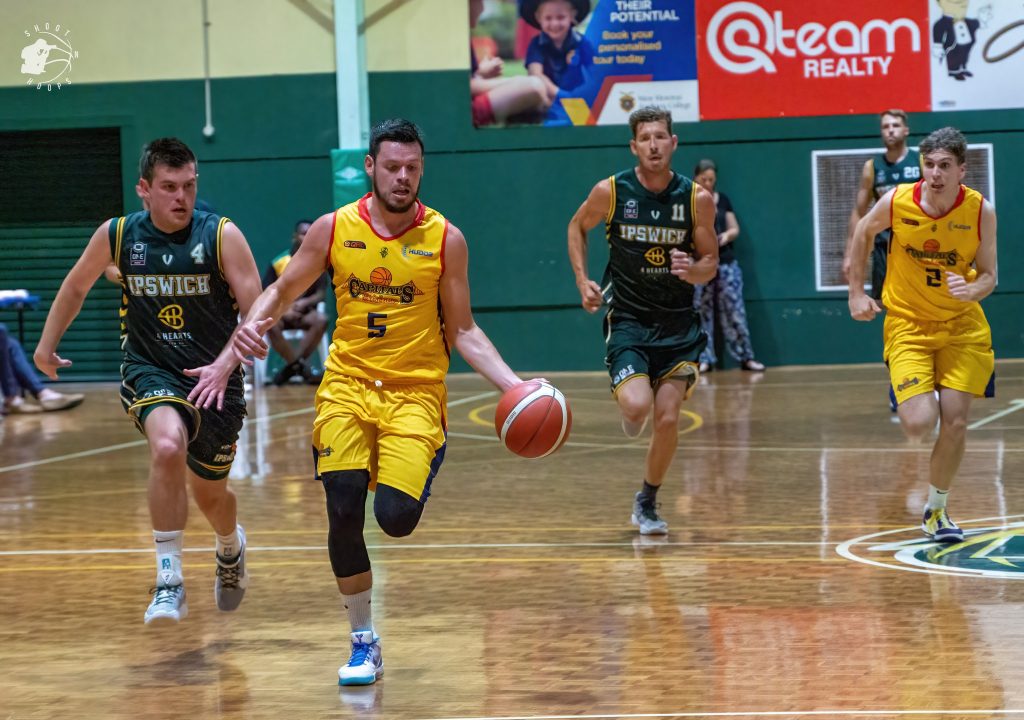 TWO electric Queensland State League (QSL) Men’s semi-finals took place overnight with the top of the table RedCity Roar escaping with a two-point victory over Sunshine Coast Phoenix Teal and Brisbane Capitals winning on the road against Ipswich Force. All roads now lead to 6.30pm tonight at the Paul Bancroft Centre when the teams face off to decide the title.

The minor premiers survived an almighty scare against a gallant fifth placed Sunshine Coast Phoenix Teal to earn a well-deserved grand final spot with a two-point victory. The Roar only marginally got up and guaranteed themselves a home grand final tonight. Both the Roar and Phoenix Teal dropped 12 triples on the night, with Phoenix Teal actually hitting more chances from the field with 38 from 76, whilst the Roar went 35 from 88. The inaccuracy might have threatened to derail the top team’s hopes, but with all the big men getting to the line, the Roar converted 13 of 18 from the charity stripe compared to five from nine of the visitors.

Across the board it was a tight affair with the Phoenix Teal mostly ahead signalling just how much they were in the contest. They led the rebounds (45-37), assists (23-18) and blocks (5-3), whilst the Roar won the steals (10-6) and most notably second chance points (19-9). The latter has been a big reason why they were so dominant, as well as their starting five’s ability to dominate on the court.

All eyes were on NBL star Harry Froling who did not let the home fans down with a ridiculous effort off the boards. He racked up 16 rebounds – seven offensive to lead the court at both ends – whilst also finishing with 22 points, four assists and one steal. It was however the effort of William McDowell-White that stole the show with a blistering 43 points, eight rebounds, four assists and four steals in a best-on performance to drag his team over the line. He sank nine of 18 triples and shot at 70 per cent from inside the arc on a night where he played every minute of the match with Froling.

For the Phoenix Teal, it was star shooter Jamaal Robateau who was front and centre. His playmaking ability in the front court was on full display as he too picked up a double-double. Recording a team-high 32 points, he also was sensational with a game-high 10 assists to break down the opposition’s defence, and whilst he also had a game-high seven turnovers, won the ball back three teams and had a block as well.

Jonathan Janssen picked up a double-double with 13 points and 13 rebounds – six offensive – as he tried to go toe-for-toe with Froling, whilst Nelson Kahler was strong thanks to 17 points – at 72.7 per cent from the field – six rebounds, two assists and two blocks. Bede Hooper (11 points, four assists), Josh Walters (nine points, three rebounds) and Zane Meehl (seven points, five rebounds, three assists and one steal) all had plenty of minutes on court.

In the later game, two sides that had been neck-and-neck throughout the season took it up to each other, and lived up to the expectations with the overall depth of talent for the Brisbane Capitals getting it done despite another outstanding performance from Ipswich Force star Nathan Sobey. The Force dropped three more triples than their opponents, but the Capitals put up more shots overall with 38 from 85 compared to 30 from 77, which helped them get the upper hand. They dominated the rebounds (54-38) and assists (25-15), and also led the second chance points (19-14), blocks (2-1) and steals (10-9) in an all-round commanding performance.

It was all about which of the various NBL players could step up on the night, and in the end, they all did with some terrific performances. Sobey had a match-high 32 points in a losing effort, picking up 11 rebounds – nine defensive – as well as six assists and three steals. Critically the pressure of the Capitals’ guards put more pressure on the talented shooter, forcing seven turnovers and a much lower shooting percentage of 37.5 than his usual accuracy. Sobey still had six triples, but from 17 attempts as Brisbane guarded the perimeter well.

It was all about the winners on the night though as they shared the load with Jason Cadee notching up a team-high 24 points, eight rebounds, eight assists and two steals, not far off a remarkable triple-double effort on the big stage. Jarred Bairstow did manage a double-double as the star on the night, picking up 20 points, 13 rebounds, two assists, one steal and one block for the Capitals.

The top efforts rolled on from the Capitals though with Nicholas Stoddart finishing with 19 points, one rebound, one assist and three steals, whilst Timothy Soong dropped seven points, 15 rebounds, seven assists, two steals and one block in another almost triple-double. Max MacKinnon was another who had a memorable night with seven points, nine rebounds, four assists and two steals.

For the Force, Mitchell Poulain supported Sobey well with a monumental effort of 22 points, eight rebounds and one block. He led the way at the shooting end, whilst Jason Ralph (11 points, four rebounds, four assists and one steal) and Jesse Ghee (six points, seven rebounds, one assist and one steal) both performed strongly. Overall though it would not be enough as the Capitals’ ability to rake in the boards and set up the offence was too much and the third placed team advanced through to the QSL Grand Final tonight.