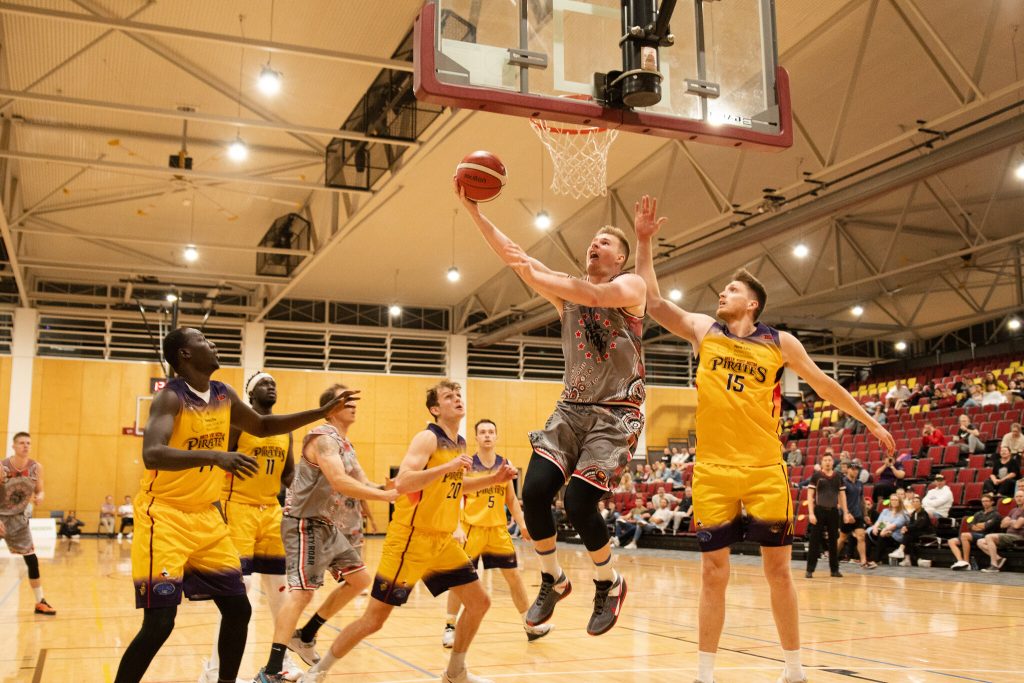 REDCITY Roar have moved two games clear on top of the table in the Queensland State League (QSL) Men’s competition, one of two sides to notch up back-to-back wins alongside Logan Thunder who moved to seventh only a win away from the top six.

Logan Thunder produced the performance of their season to completely dominated Toowoomba Mountaineers and leapfrog on the ladder. The home side won by a whooping 49 points much to the delight of those in the stadium, taking out the one-sided contest 118-69. They dropped 11 three-pointers and shot at more than 60 per cent from the field, whilst the Mountaineers ran at below 40. Meanwhile the Thunder also won the rebounds (47-39), assists (36-19), steals (19-4) and second chance points (28-6) in a complete domination. Atem Bior led the way with a double-double of 27 points, 11 rebounds and two steals, sharing the load with Elijah Puna (21 points, nine rebounds and three assists). Also in double-digit points were Ranko Puseljic (14 points, three rebounds, four assists and four steals), Kian Dennis (12 points, seven rebounds and two assists) and Thomas Ammar (10 points, six rebounds and three assists in a real team effort. Jakobe Hunter led the way for the Mountaineers, putting up a team-high 16 points, as well as five rebounds and six assists, while Bailey Nwanevu (13 points, six rebounds) and Joseph Johnson (10 points, nine rebounds and eight assists) were both strong.

Gold Coast Rollers held on in a thriller against Northside Wizards to move one win ahead of their opponents and into seventh on the table. Whilst they are two wins behind sixth, they have two games in hand and will be keen to have a strong finish to the season in the next few weeks. The Rollers made the most of their long-range shots with nine of 28 compared to four of 23, and also stood up defensively to win the steal count, 13-8. In most other areas it was the Wizards who led the way, including rebounds (49-39), assists (19-18), blocks (5-3) and second chance points (15-6). Jaze Morris put up 21 points, eight rebounds and three assists in the win, teaming up with Jalen Patton Croker (19 points, eight rebounds, five assists and three steals) and Adrian La Fleur (12 points, four rebounds and two steals). For the Wizards, it was Cameron Thew who dominated off the boards with 15 points, 15 rebounds, four assists and two blocks, while Luke Stewart (13 points, 12 assists, eight rebounds and two steals) also recorded a double-double. Jacob Arthur (20 points, seven rebounds and two steals) and James Ringholt (17 points, four rebounds and two blocks) also went big, but scored the majority of the team’s points.

Ipswich Force sits in outright fourth after a strong win over the winless North Gold Coast Seahawks on the road. The Force amassed 113 points in the 43-point victory, to move to 6-2 for the season and remain a title contender. Statistically speaking, the Force controlled play with a high 59 per cent from inside the arc and 43 per cent from outside it, as well as leading the rebounds (47-39), assists (23-13), second chance points (22-17), blocks (6-1) and steals (14-8), while the Seahawks had more triples (12). Ryan Jeffries had a match-high 22 points, as well as three rebounds and two assists in the win, while it was Mitchell Poulain (16 points, 12 rebounds) who recorded a double-double for the winners. Jesse Ghee also had a good day out with 22 points, three rebounds and two assists. For the Seahawks, Loseli Shortland was the star with a double-double effort of 16 points and 12 rebounds, while Maika Shortland also tried hard, notching up 15 points and six rebounds.

The top of the table undefeated Roar had their first win of the weekend with a 19-point triumph over a gallant South West Metro Pirates. The Pirates moved to a 5-5 record from 10 games but showed they could compete with the top side in a solid performance. The Roar were just deadly from long-range, dropping 15 triples at 34 per cent, but could not find the same range from two-point range. They also led the assists (25-17), steals (13-8), blocks (4-1) and second chance points (16-3), while the Pirates topped the rebound count (52-48). Harry Froling was the difference between the sides, dropping 33 points, 15 rebounds, three assists, three steals and two blocks, recording a massive six triples on the night. Verle Williams III was the other prominent scorer for the winners with 16 points, nine assists, three rebounds and four steals, while Darryl McDowell-White (10 points, two steals) notched up double-figure points. For the losers, Tanner Krebs tried hard with 17 points, 10 rebounds, six assists and two steals, while Max Kearle (10 points, two rebounds) and Atem Atem (eight points, eight rebounds and two assists) were solid.

In a battle of two contenders, Southern District Spartans got a crucial win to dislodge Brisbane Capitals from second spot and sit with seven wins from nine games. For Phoenix Teal, they remain on five wins, but now sit two wins away from the top three. The Spartans were far more accurate than Phoenix Teal, shooting at 38.5 and 57.8 per cent from three and two-point range respectively compared to 16.7 and 44.6 per cent. In terms of other numbers, the Spartans were too good in the rebounds (48-33), assists (19-9) and second chance points (18-13), while the Phoenix Teal had more steals (13-9) and blocks (3-0). Anei Muorter recorded a team-high 20 points, as well as a consistent five rebounds, five assists and two steals in the win. Callum Dalton (19 points, eight rebounds and two assists) and Tyrell Harrison (14 points, nine rebounds, three assists and three steals) were both strong, while veteran Mika Vukona played the most minutes he has all season with 21, and put up nine points, seven rebounds, three assists and two steals. for the losing side, Jamaal Robateau had a match-high 27 points and nine steals, as well as two rebounds and three assists. Picking up a double-double, Nelson Kahler (18 points, 11 rebounds) was prolific, while Jonathan Janssen (13 points, seven rebounds) also contributed.

In a top of the table clash, RedCity Roar picked up their second win of the weekend and went two games clear on top with a ninth consecutive win. The Roar shot at 42 per cent from long-range, dropping a mind-boggling 19 triples, as well as more than 50 per cent from inside the arc. RedCity also won the rebounds(46-36), and blocks (6-0), though the Capitals got on top in the assists (23-18), second chance points (11-6) and steals (9-8). Froling had another double-double with 27 points, 10 rebounds, two assists and two steals, as McDowell-White picked up a match-high 28 points to back up his effort the day before, whilst brother William McDowell-White had a much larger influence on the game with a double-double of 16 points, 12 rebounds, four assists, two steals and three blocks. For the Capitals, Jason Cadee helped himself to 27 points, seven rebounds, eight assists and four steals, while Ben Wilson (15 points, six rebounds, two assists and four steals), Timothy Soong (13 points, seven rebounds and three assists), Nicholas Stoddart (12 points, four rebounds and four assists) all stood up strongly.

Logan Thunder also made it back-to-back wins for the weekend, picking up a 13-point victory over USC Rip City. The win saw the Thunder move up to 4-5 for the season as they begin to play some of the lower sides and get on a roll. In the 86-73 victory, the Thunder was the more accurate team from inside the arc, scoring at a 66.7 per cent clip, whilst USC did it at 44.9 per cent. The Thunder also had plenty of rebounds (55-38), and had more second chance points (14-10), but Rip City was on top in the assists (20-19) and steals (15-10). Dennis picked up a match-high 26 points, as well as three rebounds and two assists, while Chris Cedar sank 18 points, as well as six rebounds, five assists and three steals. Mitchell Young was prominent with a double-double of 10 points and 14 rebounds in the win, while Bior finished with 12 points and four rebounds. For USC, it was Riley Cordwell picking up a team-high 19 points, six rebounds and three steals, while Flyn O’Toole (14 points, eight rebounds and four steals) and Tyler Allen (13 points, 10 rebounds and five assists) were also prolific off the boards.