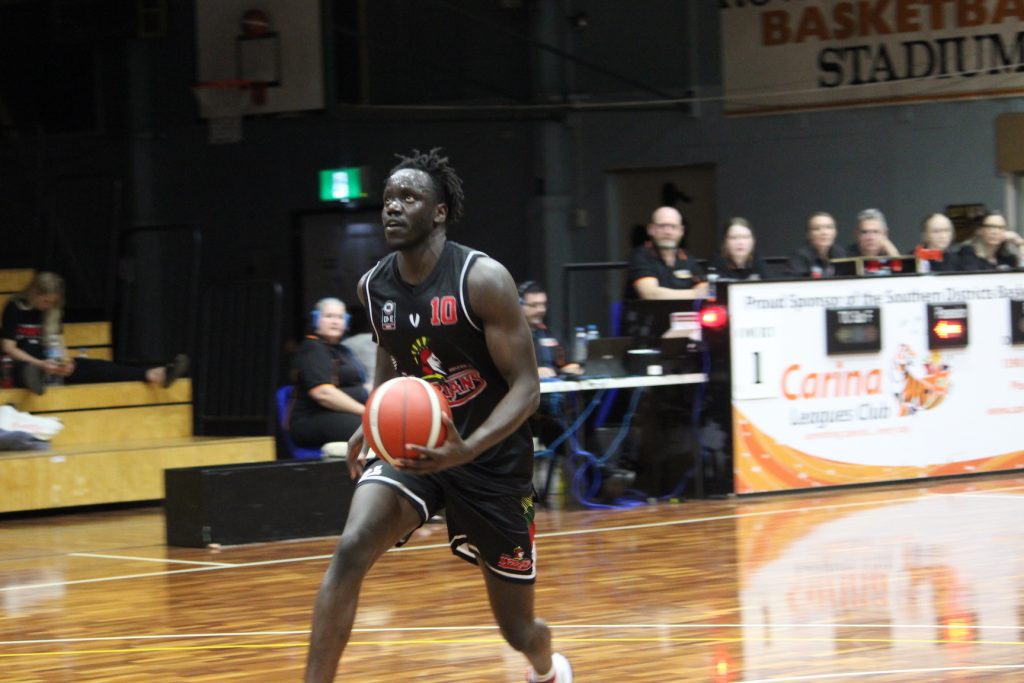 REDCITY Roar showed their depth on the weekend in the absence of Harry Froling, whilst Southern Districts Spartans powered their way to a massive 127 points in a big win, wrapping up Round 7 of the Queensland State League (QSL) Men’s competition.

Sunshine Coast Phoenix Teal handed USC Rip City a 20-point defeat in the standalone Friday night fixture, with the visiting team moving to a 5-2 record this season thanks to the victory. The visiting team dropped a whopping 17 triples to nine, shooting at 39.5 per cent from the field as they hit the ton, as well as dominating off the boards (59-33), and second chance points (29-12). USC had less turnovers (6-15), and more steals (9-3) so were cleaner with the ball, but shot just 28 of 78 from the field. Jamaal Robateau finished the night with a match-high 23 points, as well as eight rebounds, four assists, two steals and two blocks for the Phoenix Teal. Nelson Kahler recorded a whopping 28 rebounds – 12 offensive – to almost pick up more than the entire opposition, whilst also notching 19 points. Jonathan Janssen (14 points, eight rebounds) was the other Phoenix Teal player to have a big night. For the home side, Isaih Tueta had 21 points, seven rebounds and eight assists, while Louis Ilton (13 points, six rebounds and two steals) and Matthew Hancock (10 points, six rebounds) also hit double-figure points in the 20-point loss.

Nathan Sobey again led the way for his Ipswich Force side as they became the second team in as many days to hit triple-figures against USC Rip City, winning by 32 points at home. They controlled the boards (51-29) and made the most of their second chance opportunities (25-15), though the assists were fairly even (17-13 Force), and both sides had four blocks each. The accuracy of the Force played a part, shooting at 39.3 per cent from outside the arc and 53.5 per cent from inside it, while USC recorded 29 and 42.1 per cent respectively. Sobey notched up a match-high 32 points, as well as seven rebounds, four assists and two blocks for the winners, while Kane Bishop (19 points, nine rebounds), Mitchell Poulain (14 points, 13 rebounds) and Jesse Ghee (17 points, seven rebounds four assists and two steals) were all prominent. For the visitors, Tueta had 22 points, four rebound and five assists, while Ilton (11 points, four rebounds and three steals) and Tyler Allen (10 points, two rebounds and two assists) were also busy.

Logan Thunder recorded just their second win of the season after some unlucky close shaves, defeating last placed North Gold Coast Seahawks in a 15-point win. The Thunder were inaccurate from long-range, dropping five of 23 triples compared to the Seahawks’ nine of 23 to keep the home side in it, though were far more accurate from inside the arc (57.7 to 38 per cent). The Thunder also won the rebound (33-25), assist (19-13), steal (15-12) and block (3-0) counts. Atem Bior (20 points, 11 rebounds, three assists and two steals) picked up a double-double for the Thunder, working well with Mitchell Young (21 points, seven rebounds and two steals), while Michael Cedar (15 points, 10 rebounds, three assists and two steals) notched a double-double too, and Kian Dennis (15 points, four rebounds, five assists and five steals) also played a strong game. Jesse Lomax (17 points, seven rebounds, four assists and four steals) was the clear standout for the Thunder, while Donovan Russell nailed all four of his triple attempts on his way to 14 points, and David Fynn finished with 11 points and three rebounds.

Brisbane Capitals held off Gold Coast Rollers to temporarily go to top spot for a day with the Capitals’ seventh win, getting up by 18 points on the road. The Capitals won the rebound (53-46), assist (20-17) and second chance points (15-3) counts, while the Rollers were better defensively with more steals (7-5) and blocks (4-3), but four more turnovers (18-14). Nicholas Stoddart (16 points, six rebounds and six assists) topscored for the visitors, as Cameron Goldfinch (15 points, three assists), Jarred Bairstow (13 points, six rebounds) and Jason Cadee (13 points, eight rebounds and six assists) were also busy across multiple facets. Jalen Patton Croker was the dominant player for the home side, notching up 21 points, seven rebounds and two assists, while Tidjane Diop (14 points, eight rebounds), Adrian La Fleur (12 points, six rebounds and seven assists) and Tom Howard (seven points, 13 rebounds, five assists and two steals) made it a tight game.

In one of the most impressive scoring efforts of the season, Southern Districts Spartans piled on 127 points in a 53-point smashing of Toowoomba Mountaineers to retain fifth spot on the ladder with a couple of games in hand to the chasing sides with a 5-2 record. The Spartans nailed 67.6 per cent of their shots from inside the arc and 36.4 per cent from outside it, higher than Toowoomba’s 41.5 and 27.6 per cent respectively. The Spartans also dominated the rebounds (55-25), helping them pick up more second chance points (18-4), as well as winning all the key areas including assists (27-10), steals (11-6) and blocks (2-1). There was no stopping Callum Dalton on his way to a massive 35 points and 11 rebounds, while Tyrell Harrison (16 points, six rebounds), Tamuri Wigness (12 points, five rebounds and six assists), Anei Muorter (11 points, five rebounds and six assists) and Andre Ugrinic (10 points, nine rebounds) were among a whopping seven players to hit double points, with two more falling a point short. For the Mountaineers, Jakobe Hunter had a big day with 28 points and five rebounds, with four players notching double-figure points even in defeat. Seth Ham (11 points, six rebounds), Bailey Nwanevu (12 points, four rebounds and two steals) and Joseph Johnson (14 points, two rebounds and two assists) all achieved the feat.

South West Metro Pirates improved their season record to 5-4 this season with a tight 11-point triumph over Northside Wizards, leaving the Wizards at 2-5 from seven outings. The Pirates were deadly from long-range, drilling 16 of 39 triples at 41 per cent accuracy, while also leading the rebound, assist and block counts narrowly. The Wizards had three more turnovers, but matched them in the steals, and also had two more second chance points. Max Kearle had a huge night with 32 points and seven rebounds, while Tanner Krebs (23 points, 10 assists, five rebounds, three steals and two blocks) was superb. Kai Woodfall (13 points, four rebounds and three assists) and Atem Atem (10 points, five rebounds and two assists) also contributed strongly. For the Wizards, Cameron Thew led the way with 26 points and 10 rebounds for a double-double, while Josh Potter (17 points, four rebounds) and James Ringholt (16 points, two rebounds and four assists) were also impressive in the loss.

In the standalone Sunday afternoon game, top of the table RedCity Roar stretched their undefeated streak to seven, taking back top spot after the Capitals kept it warm for a day. The Roar were far from dominant though, as the stats showed a fairly even performance with both teams notching up 43 rebounds, and the Mountaineers leading the assists (23-13). In the end it was the visitors’ cleanliness (18-26 turnovers and 19-10 steals) that proved the difference in the 24-point win. With no Froling out on court, it was up to the McDowell-White brothers to do all the damage, with William McDowell-White (30 points, five rebounds, six assists and six steals) and Darryl McDowell-White (23 points, three assists and five steals) having big afternoons. Jean-Luc Morel helped himself to a double-double of 11 points and 14 rebounds, while Blake Notman drained four triples – second to William McDowell-White’s five – on his way to 19 points and five rebounds. For the Mountaineers, it was the double-double of Ham (19 points, 13 rebounds and three assists) and scoring power of Hunter (23 points, seven rebounds, three assists and three steals) that stood out, while Johnson also had another solid game with 13 points and three rebounds.