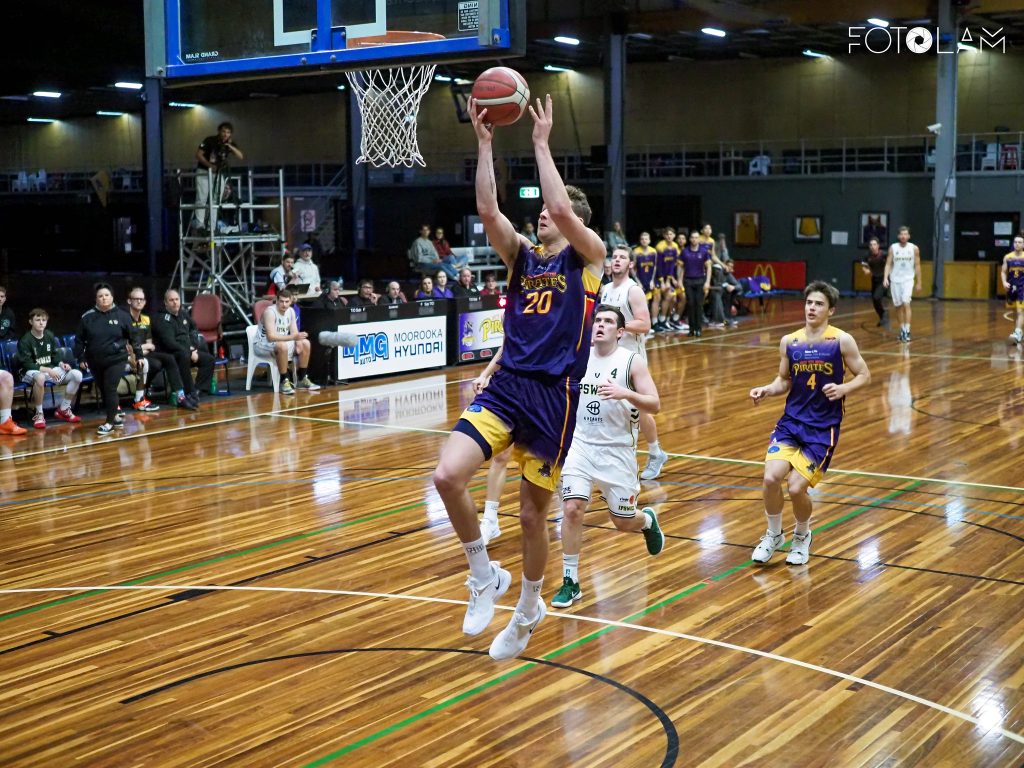 BRISBANE Capitals have kept touch with the top three sides in the Queensland State League (QSL) Men’s competition, collecting back-to-back wins over the weekend to go to 3-1 for the 2020 season. It was a round of thrashings, as a number of teams won by 20 or more points, though USC Rip City and South West Metro Pirates both got away with a couple of tight wins at the end of the round.

Starting the weekend off on the right note, Brisbane handed USC a big 27-point loss at home with an accurate shooting display from inside the arc. Rip City actually put up an additional attempt compared to their opponents from two-point range, but only made 20 at 44.4 per cent accuracy, while the Capitals shot 27 of 44 at a much higher, 61.4 per cent. The visiting team also dominated the assists (28-11), and steals (18-9), though Rip City had two more rebounds (42-40). The higher turnovers from the home team (23-14) hurt them in the end. Cameron Goldfinch led the way with 18 points, six rebounds, and two assists for the winners, while Jarred Bairstow came close to a double-double thanks to 16 points, nine rebounds, five assists and two steals. Lachlan Venus (13 points, seven rebounds) was prolific on the scoring front while NBL talent, Jason Cadee had eight points, two rebounds, seven assists and five steals. For the losers, Riley Cordwell was the sole double-figure scorer picking up 12 points, as well as four rebounds, while Dane Glover was the next highest scorer with eight points, four rebounds, three assists and one steal.

The Capitals remarkable weekend continued on Saturday with a strong 36-point thumping of Toowoomba Mountaineers. They shot at 41.7 per cent from long range and 61.9 per cent from inside the arc, winning most areas including assists (27-16), rebounds (44-39) and less turnovers (15-17). Cadee monstered the opposition with 28 points, seven assists and two rebounds, while Bairstow had another huge game with 23 points, nine rebounds, three assists and two steals. Nicholas Stoddart (19 points, eight rebounds, three assists and three steals) and Goldfinch (18 points, five rebounds and two assists) were also busy. Toowoomba shared the points around in a losing side, with Jakobe Hunter (17 points, eight rebounds and six assists) and Malat Makuach (16 points, six rebounds and one steal).

Another one-sided contest on Saturday saw RedCity Roar continue their unbeaten streak with a massive 20-point win over Gold Coast Rollers. The Roar dominated the steals (17-8 ) and rebounds (50-35) with the second chance points being a key factor (19-12). William McDowell-White (30 points, 13 rebounds, eight assists and eight steals) almost had an unheard of quadruple-double, while Harry Froling picked up a lazy 20 rebounds – seven offensive – to go with 28 points, three assists, three steals and two blocks. Verle Williams III was also busy with 24 points, four rebounds, four assists and two steals. Tidjane Diop did his best for the Rollers with a team-high 20 points, seven rebounds and two steals, while Tom Howard collected a double-double courtesy of 13 points and 12 rebounds, as well as five assists and two steals.

In the most one-sided match of the entire weekend, Sunshine Coast Phoenix Teal flexed their muscles against North Gold Coast Seahawks in a 50-point shellacking to remain undefeated at the top of the table. They dominated in every facet with 11/32 from three-point range, and greater than 55 per cent from inside the arc. They also had a whopping 24 assists to four, as well as more steals (12-6), rebounds (53-39), blocks (6-2) and less turnovers (11-22). Nelson Kahler picked up a double-double for Phoenix Teal with 20 points and 11 rebounds, while Jamaal Robateau had his way with 20 points, six rebounds and five assists. Zeke Meehl and Joshua Walters both recorded 20 points in the win. Maika Shortland was a lone hand for the Seahawks, picking up 19 points, seven rebounds, two assists and two steals as the only double-digit scorer in a losing side.

In another undefeated side taking on a winless one – albeit the latter having only played the one game – Southern District Spartans took out a 19-point win over Logan Thunder to go three from three in season 2020. The Spartans were more accurate from long range with nine from 25, whilst picking up three more assists (21-18), six more rebounds (43-37) and 12 more second chance points (18-6). Tyrell Harrison had a big day out with 22 points, 10 rebounds, two assists and two blocks in the win, as Callum Dalton (10 points, 10 rebounds) also picked up a double-double and Anthony Drmic (20 points, seven rebounds and eight assists) had an all-round strong game. Joshua Derksen (14 points, five rebounds) and Kon Anguik (13 points) were both busy. Chris Cedar picked up a match-high 26 points, as well as four rebounds and six assists, while Atem Bior (19 points, eight rebounds and three steals), Moses Majok (17 points, eight rebounds) and Mitchell Young (six points, 11 rebounds) were all impressive off the boards for the Thunder.

After losing on Friday night, USC Rip City bounced back with a narrow three-point win over the Wizards. Shooting was still a worry for the visitors, but neither side had particularly great range, picking up just 41.7 per cent from inside the arc and 22.9 per cent outside it. In the end, the volume of shots was the difference with eight triples to four made, helping USC to the win. Their defensive pressure (15 steals to six) and less turnovers (13-24) was key in the victory. Matthew Hancock was the most prominent scorer for the winners with 19 points and five rebounds, while Glover (12 points, five rebounds, six assists and two steals) and Tyler Allen (nine points, four rebounds and five assists) also worked well. For the losers, Cameron Thew (14 points, eight rebounds), Zach Williams-Hook (11 points, six rebounds and two blocks) and Mitch Elliott (10 points, six rebounds) all picked up double-figure points.

In the second tightest game of the round, South West Metro Pirates picked up their first win of the season with an eight-point victory over Ipswich Force. The Pirates were deadly from outside the arc, shooting at 41.4 per cent, and whilst the Force were much stronger inside it (58.8 per cent), the home team had six more rebounds (40-34). The Force won the assist count (17-14), had five less turnovers (7-12) and had one more steal (5-4) to show they were up for the fight. Kai Woodfall starred for the home team with a double-double of 19 points, 10 rebounds and six assists, while Tanner Krebs helped himself to 23 points, nine rebounds, three assists and two steals. Mathiang Muo (12 points, six rebounds) and Atem Atem (12 points, four rebounds) were also prominent in the victory. For the losers, Nathan Sobey had a strong scoring effort, dropping seven of his team’s 10 triples on his way to 29 points, six rebounds and two assists. Jesse Ghee (14 points, eight rebounds, two assists and two steals) and Kane Bishop (11 points, six rebounds and four assists) both stood tall in defeat.