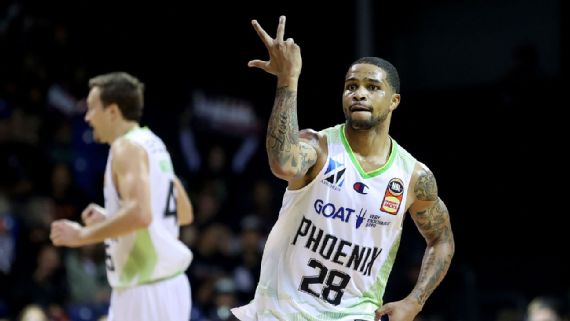 SOUTH East Melbourne Phoenix have all but secured their spot in the 2021 National Basketball League (NBL) finals with a hard-fought five-point win on the road against New Zealand Breakers. The Phoenix desperately needed the victory with the Sydney Kings and Brisbane Bullets closing in, and the win handed them that spot, with an 80-point loss to Brisbane on Monday the only thing that could knock the Phoenix out of the top four.

In the match against the Breakers, neither side gained too much ascendancy early, both putting 26 points on the board. It was the second term where the Phoenix broke away, once again scoring 26 points, but restricting the Breakers to just 16, in order to secure a 10-point half-time lead. The teams were once again all square in the third term with 15 points apiece, and whilst the home team did put up a fight in the final stanza with a 21-16 quarter, it would not be enough as the Phoenix reigned supreme, 83-78.

Leading for the majority of the match aside from some brief passages of play in the first term, the Phoenix unsurprisingly lead the majority of the statistics. Shooting at a higher field goal percentage (45 to 40 per cent), the Phoenix also had more rebounds (44-34), assists (15-12) and blocks. They got in the paint more (40-30), and capitalised on second chance points (15-7). With rotations becoming a premium, the Phoenix also had 10 more points from the bench (21-11). New Zealand had three less turnovers (7-10), and they were able to marginally get more points from turnovers (8-6). The Breakers also had more steals (7-3) and had one less personal foul (17-18).

South East Melbourne Phoenix were lead by Keifer Sykes who put up a match-high 29 points, as well as seven rebounds and five assists in a standout performance. The points were otherwise shared around with Ben Moore making the most of his 19 minutes off the bench with 11 points, nine rebounds and two blocks, while Reuben Te Rangi had 10 points and four rebounds as the other player to reach double-figure points.

New Zealand Breakers’ season comes to close with the loss in what has been an undoubtedly challenging campaign after so many road games before being allowed to return home. For the Phoenix, they have an all-bar-certain finals campaign to look forward to, but first have Brisbane Breakers, and barring an 80-plus point loss, they will play in the post-season series. Win, and the Phoenix will jump to third and take on Perth Wildcats in the semi-finals series.