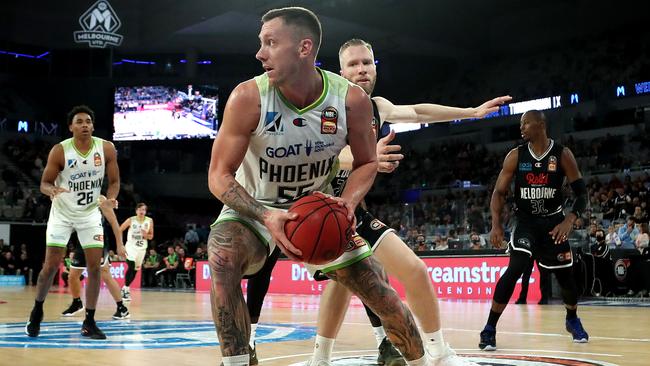 THE South East Melbourne Phoenix have tightened their grip on a maiden finals appearance with a 94-83 triumph over top of the table Melbourne United. With the playoffs approaching, the Phoenix sent a message to the rest of the competition, storming past their cross-town rivals to prove that they can defeat any team in the competition. With import guard Kiefer Sykes back in the lineup and as dangerous as ever, the Phoenix were able to break the game open in the third quarter, as their offence flowed with rhythm and fluidity.

The first quarter saw a tense battle, with both sides answering the call from each other. A late Scotty Hopson dunk saw United draw the scores level heading into quarter time at 20 apiece. The second quarter saw more of the same as Sykes began to heat up, but United kept up on the scoreboard with the likes of Mitch Mccarron getting to the free throw line on multiple occasions. The game was once again tied at the main break, and the Melbourne derby was the close contest fans expected heading into the match.

The third term was where the game was won, with the Phoenix regaining the lead halfway through the quarter and breaking away from their opponents, who were left helpless with the prospect of slowing down the likes of Sykes and Mitch Creek who was beginning to find his offensive mojo. With the margin suddenly eight points at the final break, the NBL world began to believe that an upset was on the cards. Phoenix had all the momentum heading into the final quarter and with United unable to contain Sykes with the absence of defensive guard Yudai Baba, the result had all but been decided. The final term saw a brilliant four-point play from Sykes that summed up the way the game had gone and was heading. The conversion of the free throw saw the lead burst out to 14 points, and the Phoenix were able to put the game in cruise control. Even when a Chris Goulding three brought the game to within five points with two minutes to play, the Phoenix had all the answers, putting their faith in the likes of Sykes to bring the game home, and he delivered, with his side running out 11-point victors.

For the Phoenix, Sykes was an absolute star for his side, finishing the game with 26 points and six assists in a match winning performance. Whenever his side needed an offensive spark, he was there, and his four-point play to open the final quarter was crucial in keeping the opposition at bay. Teammate Creek was strong as well, pouring in 14 points, eight rebounds and eight assists in a typically all-around performance, while Yannick Wetzell’s 12 points were handy. For United, Jock Landale led the way with 19 points (8-8 FG from inside the arc), using his offensive ability to keep his side competitive throughout the match, particularly in the first half. United star Goulding was banged up after a collision with Sykes and was limited to just 20 minutes for the match. This didn’t stop him from ending the match with 13 points, but his side would have much preferred their gun guard at 100 per cent for the entirety of the match.

This was the South-East Melbourne Phoenix’s third win in a row as their momentum builds heading into potentially their first ever playoff appearance as a club. They sit in third place with only three rounds remaining for the season and will head to Nissan Arena to take on the Brisbane Bullets on Saturday night. Despite the loss, United still sit a game clear on top of the ladder at the pointy-end of the season. They take on the Illawarra Hawks on Tuesday night at WIN Entertainment Centre.