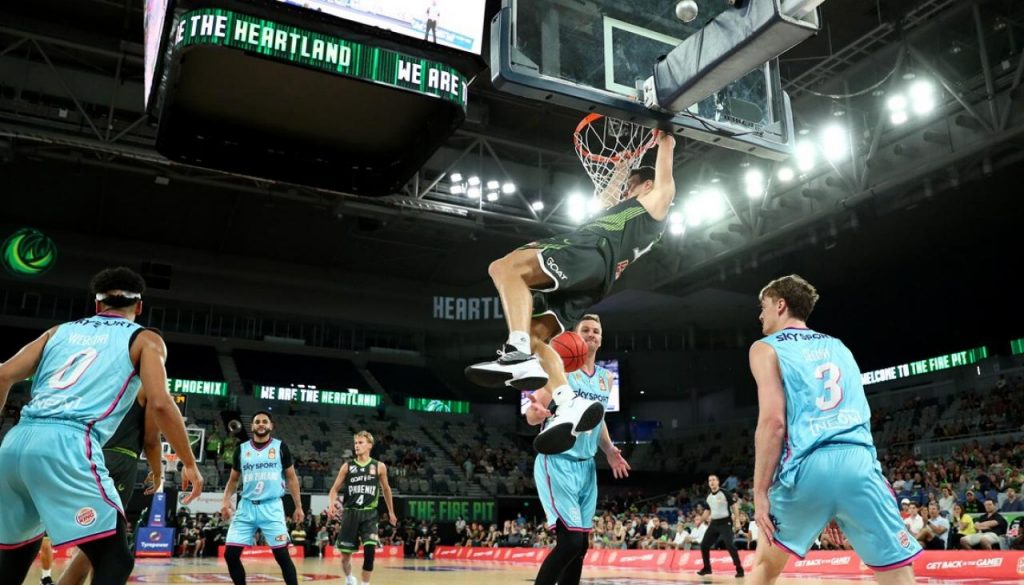 SOUTH East Melbourne Phoenix have stormed to a memorable seven-point win over New Zealand Breakers at John Cain Arena last night, maintaining their good form in the National Basketball League (NBL)21 competition. Despite the best efforts of a record-breaking Colton Iverson (26 points, 22 rebounds), the Phoenix had the answers when it counted. Trailing by two points at the final break, the home team scored 25 points to 16 in the last term to secure the 92-85 victory.

It was the Phoenix who looked to have the ball on a string early in the contest, shooting 29-17 in the opening term to open up a whopping 12-point lead after a quarter played. The visiting team began to turn it around through the middle of the match, scoring 23-17 and then 29-21 in the second and third terms respectively to hit the front by two points at the final break. The Breakers first hit the front with just under five minutes left in the third quarter, and then managed to hold that advantage – by just two points – after going up by as much as four late in the quarter.

An Adam Gibson triple a couple of minutes into the final quarter put the Phoenix up in the match, and then five consecutive points to Mitch Creek extended the lead out to six by the midway mark of the term. The teams traded baskets for the next few minutes, with another Creek layup with 80 seconds on the clock handing the Phoenix a comfortable seven-point lead. Iverson had other ideas through, with back-to-back free throws, a block, defensive rebound and then driving layup to cut the deficit to just three points with 26 seconds on the clock.

A deliberate foul on Creek saw the ex-NBA player make no mistake from the charity stripe, but Iverson was there again with the layup and the deficit was a single basket once again. Another deliberate foul, this time on Cam Gliddon extended it back out to five points with his successful free throws, whilst a bad pass from Finn Delany saw Creek steal it and when Ben Moore duly delivered off the foul with half a dozen seconds left, the game was over, and the 92-85 win handed to the Phoenix.

The home team was more efficient from the field, shooting at 51 per cent to the Breakers’ 46 per cent, as well as an 84 per cent strike rate from the charity stripe compared to New Zealand’s 63 per cent. The rebounds were fairly even, and both teams had low turnovers (8-9 in favour of Phoenix), whilst the home team capitalised through assists (21-15), won the points in the paint count (42-38) and punished the Breakers off turnovers (18-6). New Zealand had more second chance points thanks to Iverson (13-7), but only had the eight points off the bench as Creek dominated off the pine for the opposition.

Yannick Wetzell won Player of the Match honours for 18 points – at 61 per cent from the field – and 10 rebounds, whilst Gliddon also nailed 18 points, shooting four of five from long-range for a high efficiency. Creek had a team-high 24 points off the bench, also recording eight rebounds and two assists in the match. Kyle Adnam (11 points, seven assists) was inaccurate from the field with just three of 13 made, whilst Moore was busy with 18 points and 10 rebounds. Ryan Broekhoff had a quieter game after a huge one last time out, picking up six points, six rebounds and two assists.

For the Breakers, Iverson’s 22 rebounds was the most in a 40-minute era and most in 24 years, while Tai Webster and Delany both hit three of seven from long-range as Webster finished with 16 points, seven assists and two rebounds, while Delany had 15 points and two rebounds, Corey Webster was the other double-digit scorer with 11 points and four assists.

The Phoenix next play Illawarra Warra Hawks on Friday at WIN Entertainment Centre, while the Breakers will have until Saturday to prepare for Melbourne United, another game at John Cain Arena.