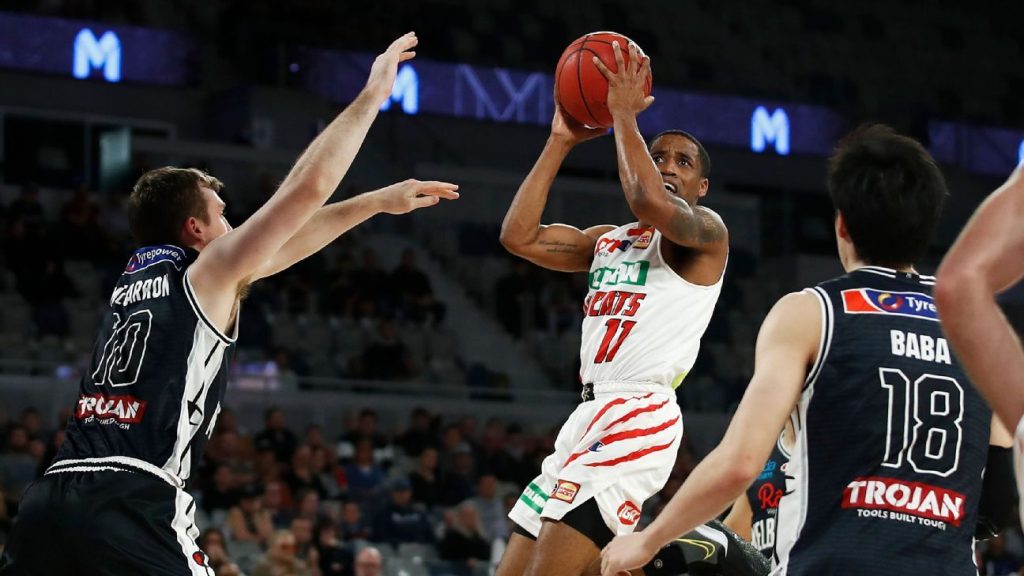 PERTH Wildcats put a stop to Melbourne United’s winning streak clinching a 13-point victory over the top of the table side away from home. United came to play in the opening quarter, but once the Wildcats found their groove they were hard to stop outscoring their opponents 70 points to 50 in the following three quarters. The win sends a clear warning shot to the rest of the competition, with Perth proving once again what they are capable of doing against a-class talent.

Perth were quick to pile on the scoreboard pressure with John Mooney and Mitch Norton combining seamlessly to steal the lead albeit by one point (8-7). But with a timeout called from United head coach the momentum switched in the opening term as play well and truly favoured the home side as they looked to notch up their 12th consecutive win. United came out with a real pep in their step attacking the basket to go on seven point straight scoring spree with captain Chris Goulding inserting himself in the action with a handy triple.

Establishing a seven-point lead at the break, United were set upon as the Wildcats rallied the troops. Perth were clearly unhappy with the start as they came out with a point to prove sinking nine points straight to steal the lead and claim the ascendancy. Kevin White made his presence felt with a triple and while United worked gallantly to stay in touch with Perth through the likes of Jo Lual-Acuil and the returning Jock Landale, the visitors simply could not be stopped. After a well-disciplined start to the game, United provided a couple of opportunities for Perth to convert from the charity stripe and that they did as they poured on 34 points including a 12-point run to take a 10-point lead at the main break.

The third quarter continued down much of the same route as Perth nailed the first four points of the game to take away and control United had. Although Bryce Cotton had been relatively quiet for the night, he decided it was his time to shine sinking a couple of triples and with support from the likes of Todd Blanchfield and Mooney the Wildcats once again piled on the points this time with a 16 points to six run. The lead blew out to as much as 19 points throughout the term before United worked their way back into the contest. With the win slipping through their fingers the home side threw everything they had at Perth as Yudai Baba got busy to reduce the deficit to 10 points.

With it all to play for in the final stanza, Scotty Hopson stepped up to the plate landing a much needed free throw to trail by nine points. On the edge of a comeback Perth re-kindled their earlier form to control the play and tempo of the game. Mooney was the main-man for the Wildcats as he continuously dragged his side out of the mess and enabled them to forge forward and steal the win. As the quarter went on the momentum well and truly shifted back in favour of the Wildcats as they not only skipped away to a 13-point margin but so too secured the win.

As a whole shooting accuracy seemed to be a problem for both sides, but Perth’s ability convert off the rebound and to nail the second chance points proved to be the difference between the two side.

It was a tough day at the office for the United as only three players managed to hit double-digits when it came to points as Landale top-scored with 11. However, in his debut game back he ran into some foul trouble and was unable to have a huge impact on the game. Goulding struggled for accuracy sitting at a mere 22 per cent from the field for his 10 points while Baba slotted 10 points of his own. Lual-Acuil made a menace of himself off the boards with 10 rebounds and chimed in with a handy eight points as Sam McDaniel also contributed eight points and five assists of his own.

For Perth it was the effort of Mooney that stood head and shoulders above the rest as he recorded another double-double thanks to his 30 points and 14 rebounds in a phenomenal showing. Cotton piled on 16 points despite being inaccurate both from the field and down town but made up for it with his crafty 10 dimes. Blanchfield was next best with nine points as Norton recorded eight points in his 27 minutes on court.