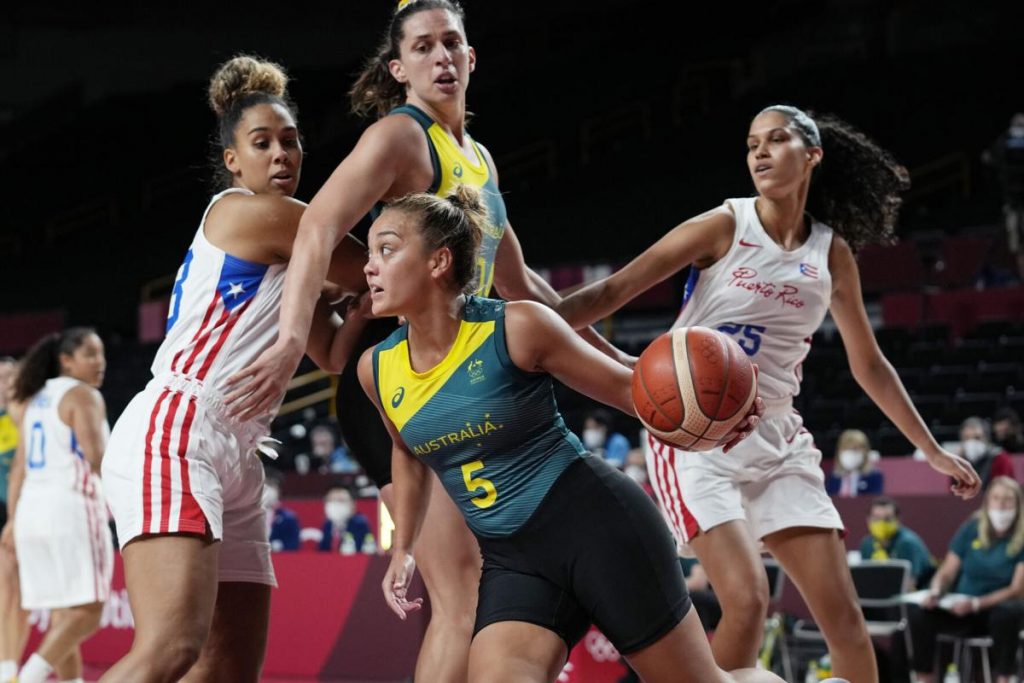 AUSTRALIA left it late but managed to grab a quarter finals spot in the Tokyo Olympics thanks to a huge second half, whilst Japan, United States and China all won their respective clashes yesterday.

Japan moved into second place in its group with a 19-point triumph over Nigeria in a high-scoring performance. The home nation piled on 30 points to 22 in the opening term, then extended the lead to 13 points by the main break. Another high scoring term of 33 points to Nigeria’s 19, the margin blew out to 27 with a quarter to play, before the loser hit back to cut the deficit back to under 20, but Japan still saluted, 102-83. Nigeria scored at 54 per cent from the field to Japan’s 49 per cent, and led the rebounds (37-33), but the Japanese nailed a remarkable 19 long-range jumpers, and dominated the assists (34-26), as well as capitalised on points from turnovers (33-12).

The other Group B match which enabled Japan to grab second spot was the Gold Medal favourites United States holding off a determined France by 11 points. The French needed to keep the deficit to under 15 points to guarantee themselves a place in the next round, and they did just that with a hard-fought effort. Actually leading by three points at quarter time, the French fell behind by six at the main break, cut the deficit back to four at the final change, before falling away in the last as the world number ones piled on 22 points to 15 to win, 93-82. The United States shot at a higher efficiency from the field (56 to 45 per cent) and despite having less rebounds (30-34), had more assists (30-22) and more points in the paint (46-30).

In a battle of the undefeated Group C teams, China grabbed top spot in the group with a 12-point win over Belgium. Whilst Belgium’s huge points differential – thanks to the massive win over Puerto Rico – ensured it would advance through to the next stage and avoid the three group winners, the second placed side still showed plenty of fight. Leading by four points at quarter time, Belgium found themselves down by a point at half-time, and then China crept away in the second half, outscoring Belgium 36 points to 25 to win by 12, 74-62. China scored at 52 per cent accuracy from the field compared to Belgium’s 41 per cent, including seven of 16 to just two of 18. They also led the rebounds (37-29) in the win.

In an even team performance, Li Yueru was the top scorer with 14 points, as well as eight assists and four rebounds. Li Meng had 11 points and seven rebounds, with Pan Zhenqi (10 points, three rebounds) and Yang Liwei (10 points, four assists) also busy. For Belgium, Emma Meesseman had a match-high 24 points in a huge effort, to accompany her seven rebounds and two assists. Julie Allemand (12 points, three rebounds and four assists) and Kim Mestdagh (12 points, five assists and two rebounds) were the other key scorers for the losing side.

Australia came back from a disappointing first half against lowly Puerto Rico to storm to a 27-point win and grab a quarter finals spot by the skin of their teeth. Despite needing to win by at least 25 points, the Opals trailed by two points at quarter time and only led by a point at half-time. The world number twos finally clicked into gear with a dominant 23-8 third term, before skating home with momentum in a 28-17 final stanza to just get over the line, 96-69. It was not without a cheeky last second three-point attempt from Puerto Rico, which, if it had gone in, would have eliminated the Opals. Australia scored at a higher clip from the field (46 to 38 per cent), had more rebounds (47-34) and assists (32-15), and less turnovers (12-17) which enabled the Opals to score more points from turnovers (20-8).

The quarter finals are now decided, with the top two in the world going head-to-head in the United States and Australia, while Spain and France, China and Serbia and Japan and Belgium lock horns in the other quarter finals.