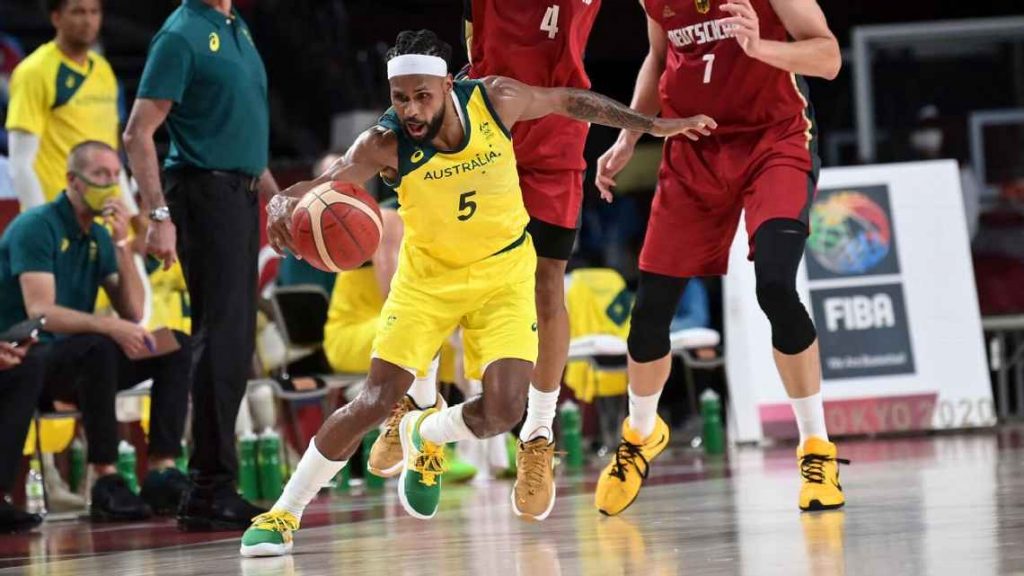 IT was another day of action packed basketball at the Tokyo 2020 Olympics, as Australia continued their merry winning ways despite missing the services of Aron Baynes while the United States also collected a convincing win against Czech Republic.

Iran put up a good fight against France but in the end France was simply too strong both in offence and defence walking away with the wind. Holding a five-point lead at quarter time France went on to inflict more pain in the second with a 24-10 term to really assert their dominance on the contest. Although Iran hit back in the third it was too little, too late as France came home strong and sealed the win. Shooting accuracy was the main differential between the two sides as France converted at 49 per cent from the field while Iran only managed 34 per cent. Rebounds were relatively close with only ten separating the two (42-32) while looking at assists France also led the way with 24 to 17.

Hamed Haddadi made his presence well and truly felt for Iran registering 18 points while he also racked up the rebounds with 12 to record a handy double-double. It did not stop there though as he chimed in with five rebounds, two steals and three blocks. Both Arsalan Kazemi and Benham Yakhchalidehkordi slotted 11 points apiece with Kazemi reeling in eight rebounds and three steals in the loss. Thomas Heurtel was the main port of call for France as he drained 16 points in just under 15 minutes while he also managed three rebounds. The points were shared around for France as Timothe Luwawu Cabarrot added 12 points along with five rebounds and three assists while Nando De Colo and Vincent Poirier contributed a solid 10 points each.

Italy stood up against Nigeria to run out with a nine-point win, coming out with a real fire in the belly in the opening quarter draining 29 points to 17 to establish a handy 12point lead at quarter time. But Nigeria struck back in the second piling on 22 points while keeping Italy to just the 11. Nigeria maintained that momentum heading into the third quarter to really assert their dominance and create a hefty lead at the final change. But Italy was not done with yet as they came out with a point to prove in the fourth term draining 24 points while keeping Nigeria to a mere eight.

Five players for Italy made it into double digits as Nicolo Melli made his mark with 15 points at 50 per cent from the field. Melli also recorded five rebounds and a steal while Achille Polonara drained 13 points, five rebounds and two assists. Nico Mannion did not skip a beat with 14 points while Simone Fontecchio also slotted 12 points and four assists in the win. Chimezie Metu was in fine form for Nigeria recording 22 points and 10 rebounds in what was an all-round solid performance. He managed an impressive six triples from seven attempts at 86 per cent. Joran Nwora was the next best with 20 points in his 34 minutes of court time while Jahill Okafor finished with 14 points and eight rebounds to his name.

The Boomers claimed another win, this time over Germany by 13 points. Germany raced out of the blocks early in the first quarter but Australia hit back in the second to not only level the scores but so to take the lead. That momentum continued into the third and they really romped at home in the 4th with a 23 to 17 point term. Australia had the upper hand when it came to field goal percentage shooting at 50 per cent however Germany were hot on their tails with 41 per cent. Germany reigned supreme on the rebound front with 45 to 28 with their form off the boards keeping them within striking distance.

Patty Mills was once again in dominant form for Australia posting 24 points, six assists and one rebound in the wind. He was ably assisted by Jock Landale who produced 18 points at 70 per cent from the field in just 25 minutes of court time. He also managed three rebounds and three assists in the win while Nick Kay also found his groove with 16 points, four rebounds and four assists. Dante Exum was the other player that managed to hit he strides with eight points, four rebounds and three assists. For Germany Andreas Obst led the charge sinking 17 points albeit at a lowly 38 per cent while teammates Johannes Thiemann and Niels Giffey registered 11 points each. Thiemann just fell short of a double-double with his nine rebounds, while speaking of rebounds Johannes Voigtmann was in blistering form off the boards with 13 to his name.

The United States came away with a romping 34-point win against Czech Republic. The US were surprised in the first term as Czech Republic opened up a seven point lead at quarter time before Team USA put the jets on in the second to flip the script and get the game back on their terms. They really put the foot down in the third with a 35-17 term while they upped the ante even further in last with 37 points to 24 in what turned into a dominant performance.

Jayson Tatum topscored for Team USA with an impressive 27 points in 24 minutes of play. He managed a 50 per cent conversion rate from down town draining five shots from 10 attempts while also picking up two rebounds. Kevin Durant upped the ante in this performance finishing with 23 points, eight rebounds and six assists to his name. Zach Lavine was solid with his 13 points while Jrue Holiday also found the net with his 11 points shooting at 71 per cent from the field. For the Czech Republic Blake Schlib was the man to watch producing 17 points and five rebounds while Jan Vesely was also a solid contributor with his 13 points in just under 30 minutes of play. Ondrej Balvin made his presence felt collecting 15 points, four rebounds and one assist as Tomas Satoransky also got into his groove with a stats stuffing performance consisting of 12 points, six rebounds and eight assists.