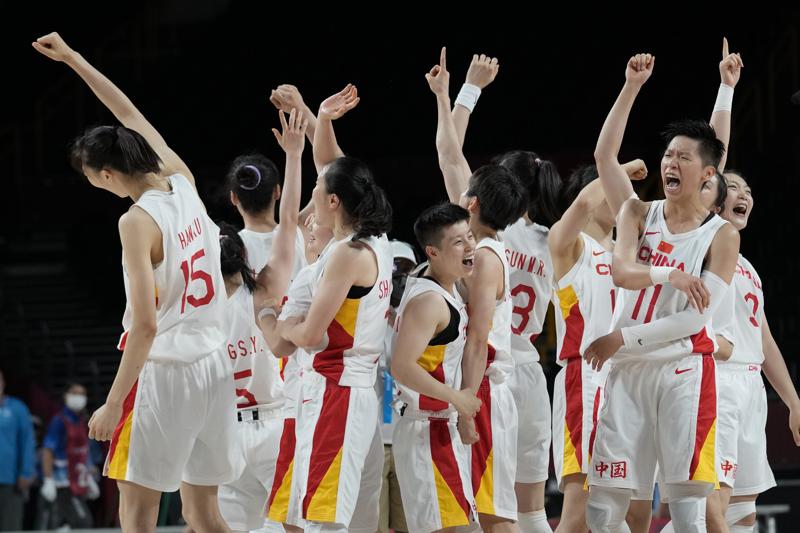 AUSTRALIA Opals were handed a huge upset by China to keep them winless so far in the Olympics while the US continued to roll on this time notching up victory against Japan.

It was a one-sided affair as Belgium reigned supreme over Puerto Rico claiming a 35-point win. Belgium won every quarter with their best performance coming in the second as the kept Puerto Rico to a mere eight points while piling on 20 of their own. They were in complete control and did not relent on their pressure and constant attack to keep the scoreboard ticking over. Belgium imposed themselves in all aspects of the game especially when it came to field goal percentage shooting at 52 per cent compared to a lowly 24. They also had more rebounds (54-33) and assists (28-11) but coughed up the ball more than Puerto Rico (20-13).

It was another stellar performance by Emma Meesseman who impressed all over the court racking up a double-double with her 26 points and 15 rebounds. She was the lynchpin for Belgium while Hanne Mestdagh also got busy with her 18 points at 60 per cent from the field. Kim Mestdagh was also in fine form for Belgium producing 15 points in her 25 minutes of court time along with six rebounds, two assists and a steal. Julie Allemand was the other one that bobbed up with a handy 10 points, six rebounds, seven assists and two steals. Jazmon Gwathmey led the charge for Puerto Rico with her 20 points albeit at 37 per cent from the field while also reeling in five rebounds. Jennifer O’Neill was solid with her nine points, two rebounds and one assist while India Pagan made her presence felt with her six points in just nine minutes.

After somewhat of a slow start, the USA managed to ride home and claim victory over Japan in convincing fashion. Down by two points at quarter time USA flipped the script in the second term to notch up 21 points while keeping Japan to just the 10. They managed to keep the foot on the pedal throughout the third while they really ramped it home in the final quarter 21 to 16. Field goal percentage proved to be the difference once again with the US converting at 54 per cent while Japan only managed 35 per cent. The United States also had more rebounds 48 to 33 and racked up a whopping six blocks to zero in the win.

A’Ja Wilson continued her merry way with 20 point and 10 rebounds highlighting just explosive she is with ball in hand while Breanna Stewart proved she was not here to muck around slotting 15 points at 60 per cent from the field while also reeling in a whopping 13 rebounds, 12 of which were defensive. Brittney Griner left her mark with her 15 points and five rebounds as Jewell Loyd chimed in with 12 points. Maki Takada was the topscorer for Japan producing 15 points and three rebounds in her 32 minutes while teammate Saki Hayashi managed 12 points. Monica Okoye was the only other player to make it out of single digits with her 11 points in 15 minutes of action.

France got the chocolates over Nigeria with a commanding 25 point win. France raced out to the lead in the opening quarter creating a six point buffer and continued to fire in the second term with 26 points 215. Nigeria continued to ply their trade but were a step off the pace as France increased that heart margin at three quarter time. Statistically it was a lot closer than the scoreboard would suggest as France had the higher field goal percentage at 50 per cent compared to 35 and more rebounds 45 to 32 but had more turnovers 15 to 13 proving Nigeria were careful with ball in hand.

The number 13 proved to be the magic number for France as four players such as Alix Duchet, Marine Johannes, Endene Miyem and Gabby Williams managed 13 points. Williams also notched up nine rebounds and four assists in the win. Sandrine Gruda did one better draining 14 points and fell just short of a double-double with her nine rebounds. For Nigeria it was Promise Amukamara that did the heavy lifting with her 11 points and three rebounds as Ezinne Kalu got busy with 10 points in 32 minutes.

China secured the two-point win in controversial fashion with Yueru Li handed two free throws after the buzzer to steal the win. It had been a topsy turvy game from the get-go with Australia unable to really assert their dominance on China as they skipped out to an eight point lead at quarter time. Although the Opals fought their way back into the contest they never looked in control with China once again pulling away in the third term with a 17 points to nine quarter. In fact the lead got out to as many as 11 points midway through the fourth before back-to-back triples from Jenna O’Hea levelled the scores with less than two seconds on the clock. But it was not to be as China triumphed in an emphatic win.

China was in the driver’s seat for much of the match as Siyu Wang piled on 20 points at 67 per cent accuracy from the field while her conversion from the charity stripe was even better slotting seven from nine at 78 per cent. She also managed three rebounds and five assists. Yueru Li not only clunked the sealer but managed 12 points, seven rebounds and five assists in the win while teammate Meng Li also got busy with her 11 points and seven assists. Liewei Yang was the only other player to reach double-digits with her 10 points, two rebounds and two assists. For Australia it was inaccuracy that cost them as Ezi Magbegor led the charge with her 15 points, four rebounds and one assists. O’Hea was the next best with her 11 points at 57 per cent from the field, while Cayla George managed 10 points, five rebounds and three assists before being fouled out of the game in the final second. Both Katie Ebzery and Leilani Mitchell worked tirelessly for their nine points but managed a mere 18 and 33 per cent respectively from the field.