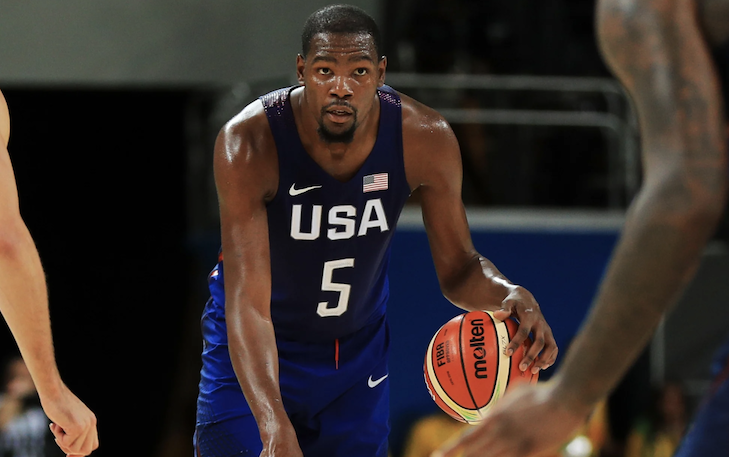 FRANCE and Australia remained the only undefeated teams after two rounds in the men’s basketball top two pools, with the United States getting on the board in a big way, and Germany keeping its hopes of progressing to the next stage alive.

Germany set up a tantalising final group match with Australia after running away with a seven-point win over Nigeria thanks to a dominant final term. Following the loss over Italy, the Germans led by three points at quarter time, but Nigeria – searching for its first win of the Olympics – drew level by the main break. Neither team could be split with a 24-apiece third term, before Germany pulled away in the last, piling on 25 points to 18 to win, 99-92. They led the rebounds by seven (35-28), and were more accurate from the field (54 to 51 per cent), though Nigeria had more assists (22-19) and less turnovers (18-20), with double the steals (12-6).

Johannes Voigtmann led the way for Germany with 19 points, and seven rebounds, while it was Maodo Lo who was the facilitator, picking up 13 points and nine assists – though nine turnovers – as well as two rebounds. Moritz Wagner (17 points, three rebounds), Danilo Barthel (14 points, two assists) and Johannes Thiemann (nine points, 10 rebounds) were the other key Germans. Jordan Nwora was a lone hand on the scoring front for Nigeria, putting up 33 points – including seven of 12 from beyond the arc – and collecting seven rebounds and two assists. Miye Oni (15 points – five of six from long-range – and two rebounds) was the other double-figure scorer for the losing side.

After a poor start to their Olympic campaign, the United States were finally able to celebrate an emphatic win, giving the fans some relief that the team formerly referred to as the “Dream Team” was not as bad as Iran. The United States had 60 points to 30 on the board by half-time and never looked like losing with another 60 points to 36 in the second half, to run away with the dominant 54-point win, 120-66. The United States had double the assists (34-17) and only six turnovers, dominating most statistics such as the shooting percentage (55 to 37 per cent) and long-range makes (19-9), as well as steals (10-3) and blocks (10-1).

Damian Lillard picked up 21 points, all of which were three-pointers (seven of 13), as well as five assists to be one of six double-figure scorers. Devin Booker (16 points, four rebounds), Jayson Tatum (14 points, four rebounds and two assists), Zach Lavine (13 points, eight assists and four rebounds) and Kevin Durant (10 points, five rebounds and five assists) all got in on the scoring act in a real team effort. Hamed Haddadi (14 points, seven rebounds) was the best for Iran, with Mohammad Jamshidijafarabadi (14 points, three assists and two rebounds) and Navid Rezaeifar (13 points, two rebounds and two assists) the other double-figure scorers in the loss.

A third quarter flurry from Australia has helped the Boomers grab a vital three-point win over Italy and put themselves in best position to grab top spot in in the Pool stage. The Boomers trailed by a point at quarter time, before stepping up in the third to win the quarter 21-17 and lead by three at the final break, which ended up being the final margin, 86-83. Italy had a higher scoring clip (50 to 46 per cent) but Australia dominated the rebounds (44-30) and assists (26-16), with the Boomers capitalising on their second chance points (17-5).

Jock Landale topscored for the winners with 18, as well as seven rebounds and two assists in the win. Fellow big man Aron Baynes had 14 points and seven rebounds, hitting two of three from long-range. Patty Mills finished with the 16 points, and despite being inaccurate for him (six of 17 from the field), he had six rebounds and five assists in the victory. Joe Ingles (14 points – four of nine triples – four rebounds and five assists) and Nick Kay (15 points, seven rebounds and two assists) were the other double-figure scorers. For Italy, Simone Fontecchio (22 points, four rebounds) and Nico Mannion (21 points, seven assists and three rebounds) teamed up for the majority of the points, while Achille Polonara finished with 12 points and seven rebounds.

France remained undefeated in Pool A with a strong 20-point win over the Czech Republic in the late match. The Czech Republic started off strongly, racing out to a six-point lead at the first break, but France not only caught up, but powered past them over the next two quarters with a 27-point turnaround. Winning the second term 29-12 and the third quarter 26-16 put them up by 21, before the Czechs won the last quarter by a point to make it an even 20-point loss, 77-97. France shot more efficiency from the field (56 to 53 per cent), had more rebounds (35-26) and assists (27-24), in what was otherwise a fair even game outside the shooting and rebounding.