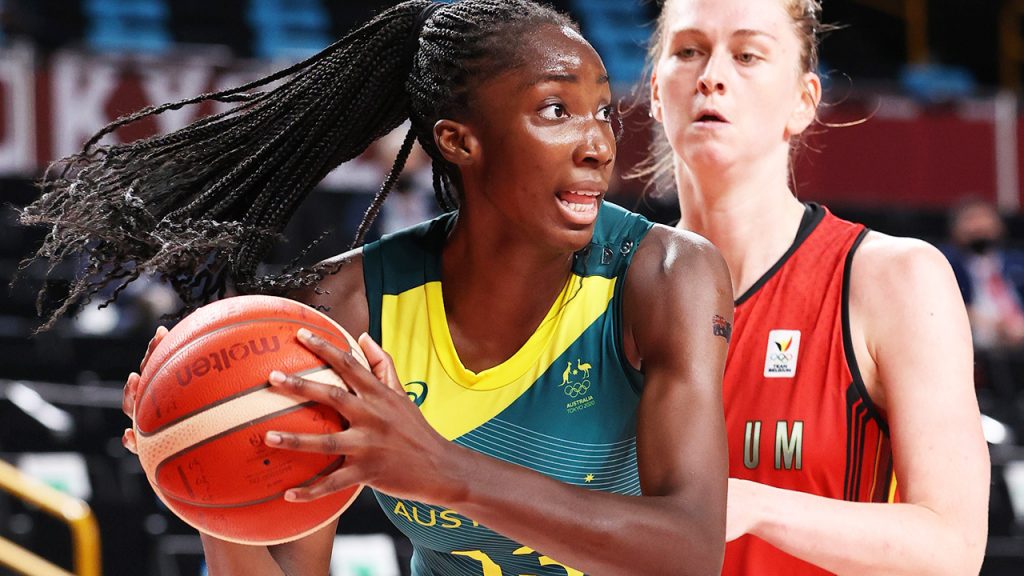 THE men were given a rest day on Day 3 of the Tokyo 2020 Olympics while for the women’s draw it was full steam ahead as four games took place. Japan opened its campaign with a gutsy win while Belgium also made its intentions clear with a dominant victory over Australia.

The contest between Japan and France went right down to the wire with the host nation spoiling the party to clinch a four-point win. France crept out to the lead at quarter time boasting a four point lead but is where it stopped as Japan steadily fought back. By half time they were back within two points before they well and truly took control of the game in the third to steal the momentum before sealing the deal in the final term.

There were three main figures for Japan as Saki Hayashi led all comers with her 12 points despite only being on court for 17 minutes. Moeko Nagaoka was in good shooting form sitting at 75 per cent from the field and finishing with 11 points and three assists to her name. teammate Maki Takada was the only other player to hit double-digits with 10 points while Rui Machida chimed in with seven points and a whopping 11 assists in the win. Sandrine Gruda dominated for France with 18 points at 64 per cent from the field while also accumulating nine rebounds and one steal. Endene Miyem made her presence felt for France with her 12 points, six rebounds and three assists as Gabby Williams was the next best with her nine points, four rebounds, five assists, four steals and two blocks in an all-round impressive performance.

Team USA kicked off their campaign in style with a nine-point win over Nigeria. It was not all their own way through as Nigeria held sway in the opening term to earn the upper hands and a chance to cause an upset. But the quality and class of the US came to play in the second and third term as they piled on 53 points to Nigeria’s 30 to swing momentum into their favour. Nigeria were not about to just lie down though as they rallied in the final term to give USA a real scare draining 22 points to 11 but they left their run a little too late.

Ezinne Kalu dominated for Nigeria producing 16 points at 54 per cent from the field while she also recorded six rebounds and two assists. Victoria Macaulay was not far off the pace sinking 11 points, three rebounds – all of which were defensive – two steals and two blocks. Both Promise Amukamara and Adaora Elonu managed 10 points each in the loss for Nigeria. A’Ja Wilson made a real splash for the US draining a game-high 19 point points at 60 per cent from the field. She also racked up 11 rebounds and four assists. Teammate Brittney Griner was also notched up a double-double sinking 13 points and 10 rebounds in her 20 minutes out on court. Diana Taurasi was in fine form nailing 10 points while Breanna Stewart just fell short of a double-double collecting nine points and 11 rebounds in the win. Although Sue Bird did not have an influence on the scoreboard her ability to set up plays was unquestionable as she recorded 13 dimes.

Belgium took Australia by surprise in the final term to arrest the lead and then steal the win from right under the Opals’ noses. It was a close contest from the opening jump-ball as the lead ebbed and flowed as Belgium held the lead at quarter time before the Opals hit back in the second to reverse the scoreline. But Belgium just proved to be too strong and too dominant winning both the third and fourth quarter. In fact, in the final stanza of play the Opals were kept to a mere 13 points as Belgium piled on 29 to really romp home the 15-point victory.

There were a couple of shining lights for the Opals with Ezi Magbegor impressing with her 20 points in 32 minutes of court time. She proved to be the real go-to girl in offence, often weaving her way towards the basket while she also imposed herself off the boards racking up 10 rebounds. Cayla George was another highlight for the Aussies draining 12 points, 10 rebounds and four assists while Katie Ezbery also made her presence felt knocking back 11 points, nine rebounds and six assists. But the real problem for the Opals was Emma Meesseman with the Belgian star getting a hand in just about everything and dominating on the scoreboard with her game-high 32 points at 58 per cent from the field. She fell just short of a double-double finishing with nine rebounds to her name along with five assists, four steals and a block in what was a complete performance. Julie Allemand chimed in with a handy 16 points and impressive 11 assists as Antonia Delaere got busy with her 17 points at 55 per cent from the field plus her four assists.

China claimed a monster win over Puerto Rico with a 42-point victory to really cement themselves as contenders. There was no denying that China came out with a point to prove pouring on the points in the opening term to establish a 15-point lead. They steadily built on that in the second quarter with a 21-9 term and refused to take the foot off the pedal in the third to really assert their dominance. The final quarter was much of the same as China drilled home 26 points to 16 as they simply could not be denied in attack or defence.

Yueru Li topped the table for China with her 21 points and 12 rebounds in what was a one-woman show as Meng Li got busy with her 15 points and four assists. Other key contributors for China were Xu Han and Zhenqi Pan who both managed 11 points each with Han also imposing herself on the boards with 14 rebounds. Puerto Rico had a couple of players step up to the plate with Pamela Rosado leading the way with her 14 points. She found her stroke from three point range with three triples from five attempts as she also recorded two assists and two rebounds. Jennifer O’Neill made her presence felt with 13 points in her 30 minutes while Isalys Quinones had a stats stuffing performance with her 10 points, five rebounds and one assist.