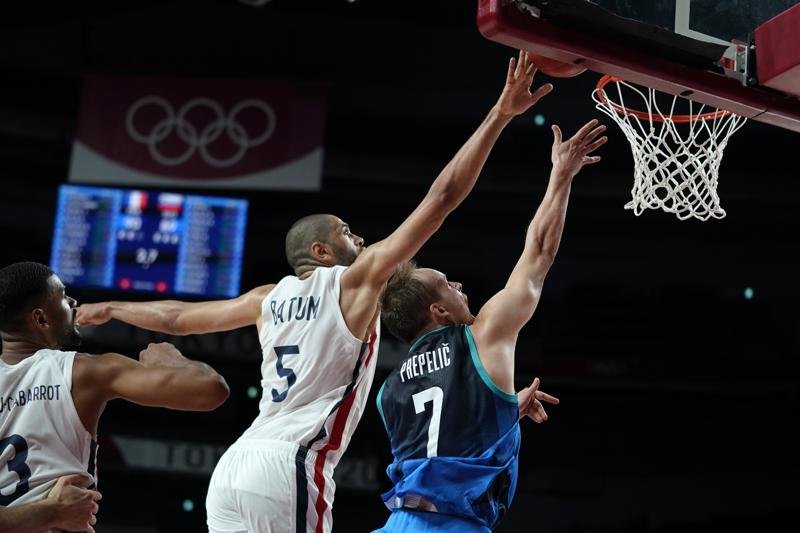 TWO games with very different results, United States advanced through to the Gold Medal final with a dominant turnaround victory against Australia, whilst France booked its spot off the back of a huge last-second defensive effort against Slovenia.

The world’s best stepped up when it counted to hand Australia a bitter blow in the semi-final, as the United States ran away with a 19-point win to book their place in yet another Gold Medal final. Having looked lacklustre at times in the lead-up to the event, and even losing their opening game to France, the United States again were on the back foot early, and lost the first quarter 24-18, and trailed by as much as 15 points midway through the second term.

Somehow they kept digging, the Boomers began to tire from their defensive press and the United States stepped up. Scoring 20 consecutive points, the Gold Medal favourites somehow turned it around to lead by as much as 23 points with a dominant 32-10 third term and strong start in the fourth. Australia did hit back to reduced the deficit slightly in the last, but it was too little, too late.

The United States shot at a higher clip from the field (51 to 41 per cent) and though they did not nail a triple until late in the second term when Devin Booker was left open, they finished with nine, only two less than Australia who had started well from beyond the arc. Dominating the rebounds (44-29), the United States also had more blocks (6-0), points in the paint (38-24) and second chance points (17-8), with Australia recording more assists (22-19).

Kevin Durant was one of the few United States players who was still stepping up when the chips were down early, recording 23 points, nine rebounds and two assists. Booker finished with three of five from beyond the arc to amass 20 points and three rebounds, while Khris Middleton (11 points, two assists) and Jrue Holiday (11 points, eight rebounds and eight assists) both hit double-digit points with the latter not far off a triple-double.

For Australia, it was Patty Mills again on show early, shooting three of five from long-range to finish with 15 points, eight assists and five rebounds to leave nothing out on the court. Dante Exum (14 points six rebounds) and Jock Landale (11 points, six rebounds) also contributed strongly, with Joe Ingles stating strong but finishing with the nine points, two rebounds and two assists.

A Nicolas Batum last-second block has sent France into the Gold Medal Match at the Olympics, handing Luka Doncic and Slovenia their first loss of the Olympics. Doncic was yet to lose in a competitive international match for his nation, and after France got away in the third term, it looked like the higher ranked nation was about to run away with it. Slovenia came to play early, leading by two points at quarter time following a high-scoring first term, and that was the same difference at half-time (44-42). After the break, it ramped up a notch for both teams with France piling on 29 points to 21 in the third term to grab the advantage by six points heading into the final break, and extending the lead out to double-digits at one stage.

It set up a blockbuster last quarter with the French keeping that six-point advantage in place for the first half of the term before Doncic and his teammates caught fire. Both Doncic and Mike Tobey were providing a problem for France, and Slovenia drew level at 78-apiece with 5:26 on the clock. A technical foul saw Nando de Colo score four points for a bit of a buffer for the higher ranked nation, with both sides then missing long-range opportunities. Doncic continued to push with back-to-back baskets, though Batum nailed a three-pointer to keep his side running hot.

With 56 seconds left on the clock after a plethora of misses, a triple from Rudy Gobert pushed the lead out to five points (90-85) and France looked home and hosed. Especially after Klemen Prepelic only hit one of two free throws from the charity stripe, something that would prove costly in the run home. It was no surprise that Doncic was having no troubles with his accuracy, draining a three-pointer with 33 seconds on the clock. De Colo missed a two-point jumper to potentially make it a three-point game with 21 seconds remaining. Slovenia had the last possession and were only a point down. Well guarded, Doncic was not the man chose as Prepelic went inside to deliver the winning blow, but Batum had other ideas, producing a terrific block, which was followed up by a Gobert rebound and the French enjoyed the narrowest of wins, 90-89.

France had more rebounds (49-40), but Slovenia was ahead in most other areas such as assists (25-19), less turnovers in a relatively clean game (6-8), points in the paint (46-26) and second chance points (17-12) in a match of nine lead changes and 11 tied scores. De Colo recorded a match-high 25 points, as well as seven rebounds nad five assists, shooting three of five from beyond the arc. Evan Fournier (23 points, five rebounds and three assists with four of six from long-range) was also lively, while Timothe Luwawu Cabarrot (15 points, five rebounds) and Gobert (nine points, 16 rebounds and three assists) were also outstanding. Batum only had the three points, but picked up five rebounds, three assists and that crucial block.

For Slovenia, Tobey had the 23 points, eight rebounds and two assists, with Doncic piling up a ridiculous triple-double featuring a mind-boggling 18 assists, 10 rebounds and 16 points. Prepelic (17 points, three assists), Jaka Blazic (14 points, five rebounds) and Vlatko Cancar (11 points, nine rebounds) also hit double-figure points in the loss. Now Slovenia takes on Australia in the Bronze Medal final, in a bid to collect a medal having come all the way from qualifying.