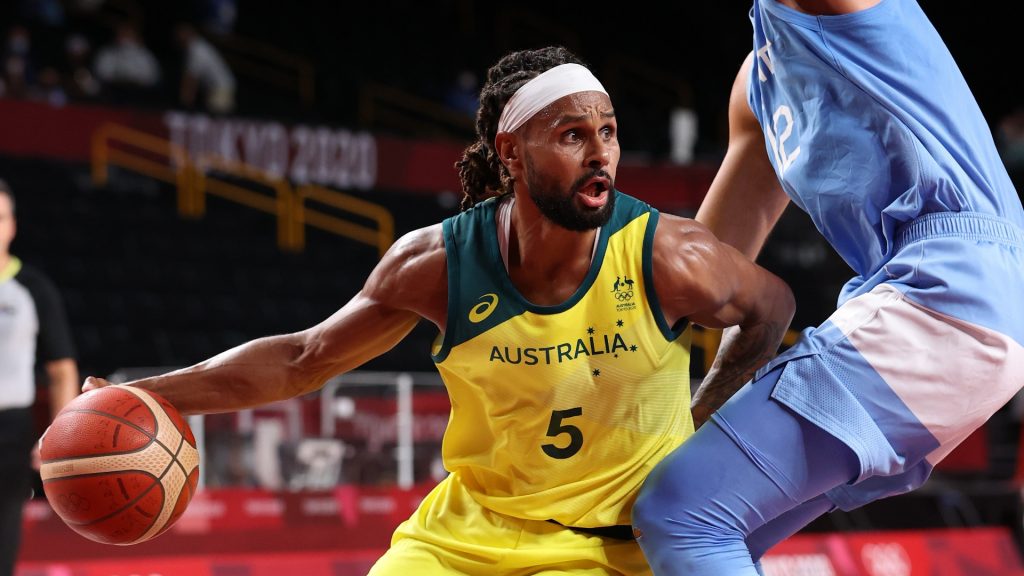 THINGS continued to heat up on Day 10 of the Tokyo 2020 Olympics as Slovenia secured a comfortable win against Germany while Australia stunned in their performance against Argentina to claim a staggering 38-point win in the quarter finals.

The good times keep on rolling for Slovenia notching up a dominant 24 point win over Germany in what was a one-sided affair. Slovenia burst out of the gates with a whopping 25 point to 14 point term to claim the early ascendancy and did not look like relenting with their pressure. Although Germany hit back in the second quarter to reduce the margin they failed to maintain that level of desperation and court play in the second half as Slovenia kicked things up a gear. They starred in the final term with 28 points while keeping Germany to 16 to really romp home the win.

Zoran Dragic led the troops for Slovenia posting an impressive 27 points at 85 per cent from the field. In fact, he was deadeye from two point range nailing six straight with his only fault coming from down town finishing with five from seven. He also registered six rebounds, four assists and three steals in the win. Luka Doncic continued his merry way notching up another double-double after draining 20 points and 11 assists and just fell short of a triple-double with eight rebounds, all of which were defensive. Mike Tobey also hit the scoreboard in the win sinking 13 points in his 33 minutes while also reeling in 11 rebounds. Jaka Blazic chimed in with nine points and three rebounds as Vlatko Cancar finished with eight points and three rebounds. Scoring proved a bit more difficult for Germany as Maodo Lo topscored with 11 points at 50 per cent from the field. Niels Giffey was hot on his heels with 10 points to his name but was fouled out of the game. Moritz Wagner worked tirelessly in his 10 minutes of court time to finish with nine points, one rebound as Danilo Barthel slotted seven points and collected six rebounds in the loss.

Team USA got the job done against Spain clinching a 14-point win. It was a tight tussle to begin with as Spain held the lead albeit by two points at quarter time. The lead ballooned out midway through the second term however the USA kicked things up a gear to get themselves back within striking distance and level things at half time. They upped the ante even further in the third quarter piling on 26 points to 20 while they left the best till last showcasing their endurance and class with a 26-18 term. Statistically speaking it was hard to split the two sides as they shot at 45 and 48 per cent from the field with the US just pipping Spain at the post.

It is not the way Marc Gasol would have liked his farewell performance to have gone as he only managed the four rebounds and one assist. But Ricky Rubio dominated with a whopping 38 points while shooting at 65 per cent from the field. He also collected four rebounds and two assists in his 27 minutes of play. Sergio Rodriguez did not muck around raining 16 points as Willy Hernangomez recorded a handy double-double with 10 points and 10 rebounds. Team USA shared around the points with five players hitting double-digits, but it is no surprise that Kevin Durant topped the table credit to his 29 points, two rebounds and four assists. Jrue Holiday was the next closest with his 12 points in 23 minutes while he also accumulated two rebounds and five assists Jayson Tatum found his stroke from deep hitting three from five as he finished with 13 points to his name. Damian Lillard and Zach Lavine were the other two to have an impact on the scoreboard slotting 11 and 10 points respectively in the win.

Only nine points divided the winner in this match with France just sneaking over the line against Italy. It was a seesawing affair as the two sides traded blows. Italy had the upper hand in the first quarter piling on 25 points while keeping France to 20. But France hit back in the second quarter to flip the script and even the ledger at half time. The table started to turn in the third quarter as France found their rhythm in both offence and defence. Heading into the final quarter with a handy lead France kicked into cruise control and while Italy worked in overdrive they simply could not do enough to get back within striking distance. The main difference was shooting percentage as France managed 48 per cent as opposed to Italy’s 32 per cent from the field.

There were two main scorers for Italy as Simone Fontecchio and Danilo Gallinari headlined the nation. Fontecchio starred with his 23 points and two rebounds as Gallinari managed 21 points and 10 rebounds in what was a strong outing. Achille Polonara also found his rhythm slotting 15 points at 63 per cent from the field while also reeling in seven rebounds. There was no shortage of options for France as Rudy Gobert had his eye in finishing with 22 points and a 77 per cent clip from the field. He fell just short of a double-double with his nine rebounds. Teammate Evan Fournier also plied his trade sinking 21 points, three rebounds and four assists as Nicolas Batum dazzled with his double-double of 15 points and 14 rebounds in the win. Thomas Heurtel also chimed in with a handy 10 points and five assists to get France over the line.

The final game of the day went the way of Australia in what was a comprehensive performance after quarter time. The Boomers ran out 38-point winners credit to a demolition final term where they poured on a staggering 37 points to 11. It was a less than desirable start to the match for the Aussies as Argentina held the lead at quarter time credit to their ability to get in the paint and score. After opting for triples throughout much of the opening stanza Australia shifted their game plan in the second to wrestle back control of the game and steal the lead heading into half time. The Boomers were not content with only being up by six points, putting the foot down in the third but it was their blistering final quarter that set tongues wagging as they completely obliterated the Argentinian team. Australia finished with 44 rebounds in comparison to Argentina’s 36 and were more accurate from the field sitting at 49 per cent compared to 34.

It was Patty Mills that once again led from the front drilling home 18 points, two rebounds and four assists in the win. He was not alone though as both Jock Landale and Matisse Thybulle imposed themselves on the contest finishing with 12 points each as Landale reeled in seven rebounds. Joe Ingles had a hot hand slotting 11 points for the game while he also proved busy in attack racking up seven assists and four rebounds. Nick Kay provided a big body for the Aussies as he collected a double-double credit to his 10 points and 10 rebounds. In fact, every player on the Australian roster managed to hit the scoreboard highlighting the number of options at Brian Goorjian’s disposal. It was a different story for Argentina as they bade farewell to five time Olympian Luis Scola who managed seven points and four rebounds in the loss. Nicolas Laprovittola topscored with his 16 points at 46 per cent from the field while Gabriel Deck had plenty of the ball reeling in 10 rebounds but was unable to find his rhythm shooting at 36 per cent for his 12 points.