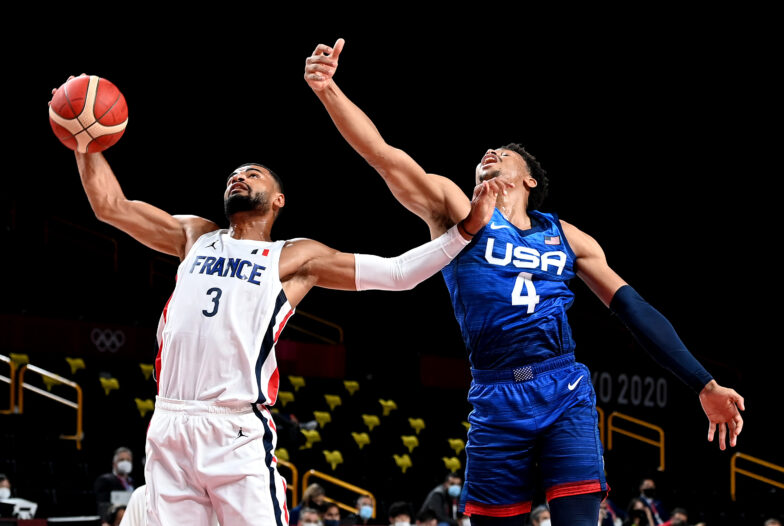 IT was an action packed opening day of basketball at the Olympics with Team USA handed their first loss in 17 years while the Australian Boomers opened their accounts with a convincing win.

The Czech Republic could not have made their Olympics debut any more memorable if they tried, claiming a seven point win over Iran to assert themselves on the competition. It did not take them long to find their groove as they opened up a handy six point lead at quarter time and did not relent on that pressure throughout the contest. Their constant hustle and willingness to win ball was front and centre as Czech Republic went up by as much as 22 points. But they took the foot off the pedal in the fourth which ultimately allowed Iran back into the contest as they drained 32 points to 17.

Benham Yakhchalidekordi was the leading scorer for Iran slotting 23 points at 56 per cent from the field. Mohammad Jamshidijafarabadi finished with 16 points at 64 per cent along with seven assists. Teammate Hamed Haddadi was not far off the pace with 15 points of his own while also reeling in 10 rebounds. There were a number of key contributors for Czech Republic as Patrik Auda led the charge credit to his 16 points and six rebounds. Tomas Satoransky was down on his lofty standards when it came to points scoring with just the six next to his name but managed to fill out the other columns racking up eight rebounds, eight assists and five steals. Blake Schilb and Jan Vesely both contributed in the  win with 14 and 11 points respectively.

Italy made their presence felt with a 10-point win over Germany despite the Germans getting the early head start. A fast finishing Italy side led by the two experienced players in Nicolo Melli and Danilo Gallinari helped get them over the line as they inspired a final quarter comeback. Germany held the lead for the majority of the game creating a 10-point buffer at quarter time but Italy steadily chipped away to pile on the last 12 points of the game to steal the victory.

Maodo Lo was in fine form for Germany producing a team-high 24 points with his accuracy and confidence from beyond the arc at full pelt draining six from nine. He also collected four rebounds and four assists in the loss. Isaac Bonga worked gallantly for his 13 points as Moritz Wagner and Andreas Obst finished with 12 points apiece for the Germans. Gallinari was a real nuisance piling on 18 points and two rebounds for Italy as partner in crime, Melli also got busy with his 13 points and nine rebounds. Stefano Tonut was a classy contributor in his 31 minutes out on court as Simone Fontecchio was the real hero paving the way with a solid 20 points at 54 per cent from the field along with 100 per cent accuracy from beyond the arc to seal the deal for Italy.

Australia asserted their dominance over Nigeria to claim a commanding win in their opening game of the Olympics. It was even to start the game with both sides unable to be split at quarter time at 23 points apiece. The tides slowly started to turn as the Boomers got a bit of scoreboard separation to create a three point lead at half time which extended to a six point lead at three quarter time. But the real damage was done in the final term with Patty Mills coming to life and absolutely dominating as Australia piled on 26 points to 15.

Mills came out with a real intensity and fire in the belly for Australia as he got down to business, sinking 25 points with his accuracy from down town well and truly coming to the fore thanks to his five from eight attempts. He also amassed four rebounds, six assists and four steals in an all-round stellar performance. Nic Kay was the next vest with his 12 points and eight rebound efforts as both Dante Exum and Joe Ingles imposed themselves with 11 points apiece in the win. Matisse Thybulle was a menace in defence picking up four rebounds and five steals for the Boomers. It was a tough day at the office for Nigeria as Obi Emegano topscored with 12 points in just 19 minutes of play showcasing just how explosive he can be. Josh Okogie collected 11 points as Jordan Nwora and Precious Achiuwa slotted 10 apiece with the latter also registering six rebounds.

It was a history-making performance by France, toppling USA and handing them their first Olympic loss in 25 games. The USA got off to a handy start draining 22 points to 15 and extended that margin ever so slightly at half time. But that is where it ended as France put the foot down in the third quarter pouring on 25 points to 11 to well and truly claim the ascendancy. They were unrelenting with their pressure both in offence and defence and did not allow the USA to gain or build any momentum to secure a huge upset win.

It was a remarkable effort by Evan Fournier who led from the front from the opening jump-ball. Fournier finished with 28 points to his name and could have had more if he was more accurate converting at 50 per cent from the field. Rudy Gobert was solid in his 29 minutes racking up 14 points and nine rebounds as Nando De Colo imposed himself with 13 points, five rebounds and five assists. Jrue Holiday was the livewire Team USA needed. Coming off the bench Holiday brought his championship winning mentality into the game draining 18 points, seven rebounds and four assists to keep his country in the race. Damian Lillard managed 11 points but was not at his damaging best as Kevin Durant slotted 10 points but found himself in some foul trouble. Bam Adebayo was dominant, credit to his double-double of 12 points and 10 rebounds but it was not enough to get the US over the line.