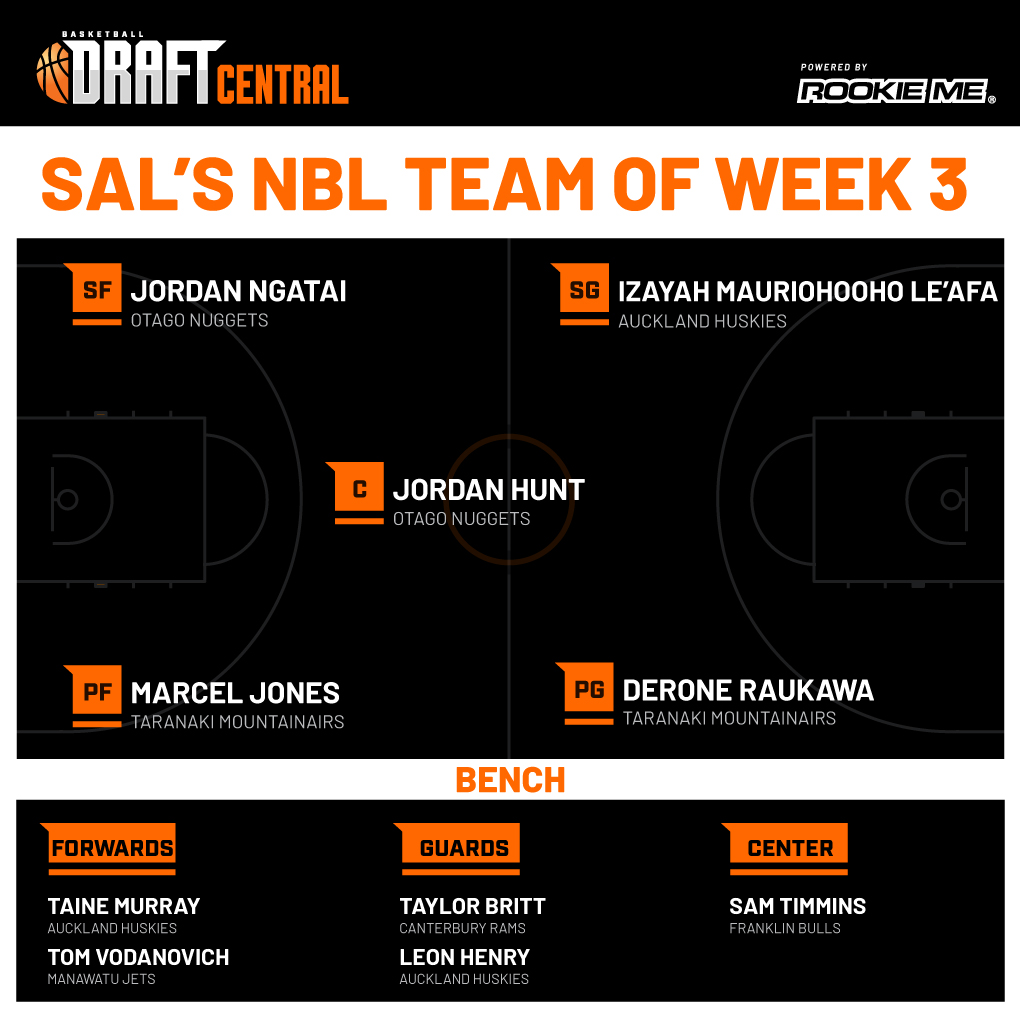 AUCKLAND Huskies are one of three sides picking up multiple players in this week’s Draft Central Team of the Week for the 2020 Sal’s National Basketball League (NBL) Showdown. The Huskies had some terrific performers across their three games, and had three players make the side, while Taranaki Mountainairs and Otago Nuggets both had two – and they all made the starting side. Franklin Bulls, Manawatu Jets and Canterbury Rams all had the one player make it into the side, with only Nelson Giants narrowly missing out this week.

This week’s Team of the Week focuses just on the week three action, and those performers who stood up across their respective games. Auckland had a trio of players with Izayah Mauriohooho Le’afa starting following a big week of 56 points, 12 rebounds, 14 assists and 16 steals, with the 5.3 steals in particular a standout area of his game that made the Huskies’ top pick too difficult to ignore in the side. He is joined in the team by teammates, Leon Henry and Taine Murray. Henry averaged the 12 points and 13 rebounds per game in week three, and slots in as the guard backup, while young gun Taine Murray was the second highest scorer across the competition and was unlucky not to make the starting side, and also fits into the bench for a reserve forward.

Top of the table Taranaki Mountainairs finished the week with two starters in the side, and it was unsurprisingly their top two stars in Derone Raukawa and Marcel Jones. The latter was arguably the top performer across the entire week notching up the highest amount of points and rebounds with a 25 and 14 average in those stats. Jones also produced five blocks over the three games to be a defensive force. Raukawa had the third most points of any player and slots into the point guard spot after 24 points and eight assists per game in week three. He too had a defensive edge with two steals per match for the Airs.

Otago Nuggets were the other side to record multiple starters in the team, as forward Jordan Ngatai and center Jordan Hunt make it into the side. Hunt could have played as a power forward, but when comparing centers he was the clear standout thanks to 20 points and seven rebounds per game. Ngatai averaged 22 points, seven rebounds and more than two steals per game in his three games to deservingly make it into the team.

Rounding out the rest of the side on the bench are Canterbury Rams’ Taylor Britt, Manawatu Jets’ Tom Vodanovich and Franklin Bulls’ Sam Timmins. Britt had a quiet first game but lit up the court in the other two in week three, to finish with 21 points and five rebounds. Vodanovich was one who could have made the starting side but just missed out, putting up an impressive 21 points and 11 rebounds, as well as four assists per game. Finally, Timmins rounds out the side with Franklin Bulls having such an even squad this week, but Timmins was impressive from the two games, averaging the 15 points, four rebounds, two steals and one block per game.

The most unlucky players to miss out were definitely Dom Kelman-Poto, Isaac Davidson and Alex Talma who were all agonisingly close to squeezing in. They were the next in line, but hard to fit into the forward spots with so many impressive forwards during week three. Others who made the short list include Jets’ duo Jayden Bezzant and Nelson Kirksey, Giants’ Tom Ingham, Huskies’ Tohi Smith-Milner and Airs’ Tai Wynyard.