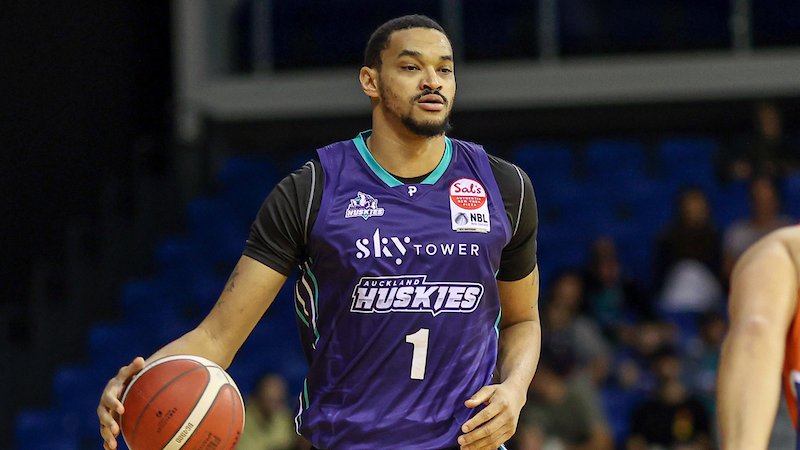 THE Auckland Huskies continued their winning ways in their second outing of the round in the New Zealand National Basketball League while the Hawks bounced back after a loss earlier in the round.

In their second game of the round it was the Huskies that made it two from two with a hard-fought win over the Jets. The Huskies asserted themselves nice and early on the contest establishing a handy six-point lead credit to some late free-throws. Scoring was hard to come by in the first few minutes of the second term as the ball ping-ponged up and down the court before the Jets hit back to get within two points and then steal the lead. This seesawing affair continued until once again it was the higher placed Huskies that kicked things up a notch. Only two points separated the two sides at half time and within the blink of an eye the Jets were level once again and had the lead in a complete replica of the second quarter. Manawatu started to motor, pouring on the scoreboard pain and creating an eight-point lead but it was not enough to worry the Huskies who fought back in the dying stages. With the lead chopping and changing the final quarter was always going to be a heart in your mouth finish and it certainly was. Auckland quickly tied things up as the intensity in the game steadily lifted and they eventually stole the lead. the buffer grew from two points to four before blowing out to the winning total of nine.

The Jets had two predominant scorers with Daishon Knight and Deandre Daniels leading the way. Daniels was the topscorer for Manawatu producing 23 points in his 40 minutes out on court while also racking up nine rebounds, two assists and two steals. Knight finished with a double-double to his name credit to his 21 points and 10 rebounds all of which were defensive. Jayden Bezzant was the only other player to have a real impact on the scoreboard credit to his nine points and three rebounds. For the Huskies it was the work of Chris Johnson that stood out as he sunk 25 points but also amassed a staggering 20 rebounds with 16 of them defensive. Bigman Tom Vodanovich was also in strong form producing 20 points, two assists and four rebounds in the win. Justin Bibbs and Zach Riley were the other two that had a notable impact for Auckland draining 14 and 10 points apiece.

The Hawks reversed their fortunes from earlier in the round with a resounding 28-point win over the Sharks last night. Taking the court for the second time in as many days the Hawks managed to string together some clever basketball to outsmart the Sharks and get the win. They burst out of the blocks in the opening quarter piling on a whopping 37 points while keeping Southland to 18 at the first break. Their accuracy and proficiency was on full display as the visitors continued to put the foot down in the second, extending out to as much as 28 points at halftime. While the Sharks upped the ante somewhat in the third term the Hawks never lost control, able to consistently ride the wave and withstand any type of pressure thrown their way. The fourth quarter was much the same as the Hawks remained in the driver’s seat, controlling proceedings and finding easy avenues to the rim to keep the scoreboard ticking over and the Sharks at bay.

It was a tough day at the office for the Sharks but Dominique Kelman-Poto was up to his usual tricks scoring 27 points in his 29 minutes out on court. Kelman-Poto also managed two assists and four rebounds in the loss while teammate Joshua Cunningham was the next cab off the rank when it came to scoring with 13 points at 55 per cent from the field along with eight rebounds. Brayden Inger was the only other player to hit double figures for the Sharks with 10 points. For the Hawks, Jordan Hunt was the man proving to have the hot hand as he dropped 21 points at 44 per cent from the field. Hunt did not stop there as he also recorded four assists and two deflections as Devondrick Walker also found himself in the thick of things with his 17 points, four assists and three rebounds. Both Deone Raukawa and Ethan Rusbatch showcased their class with 12 points apiece as the latter also walked away with four assists and a steal.