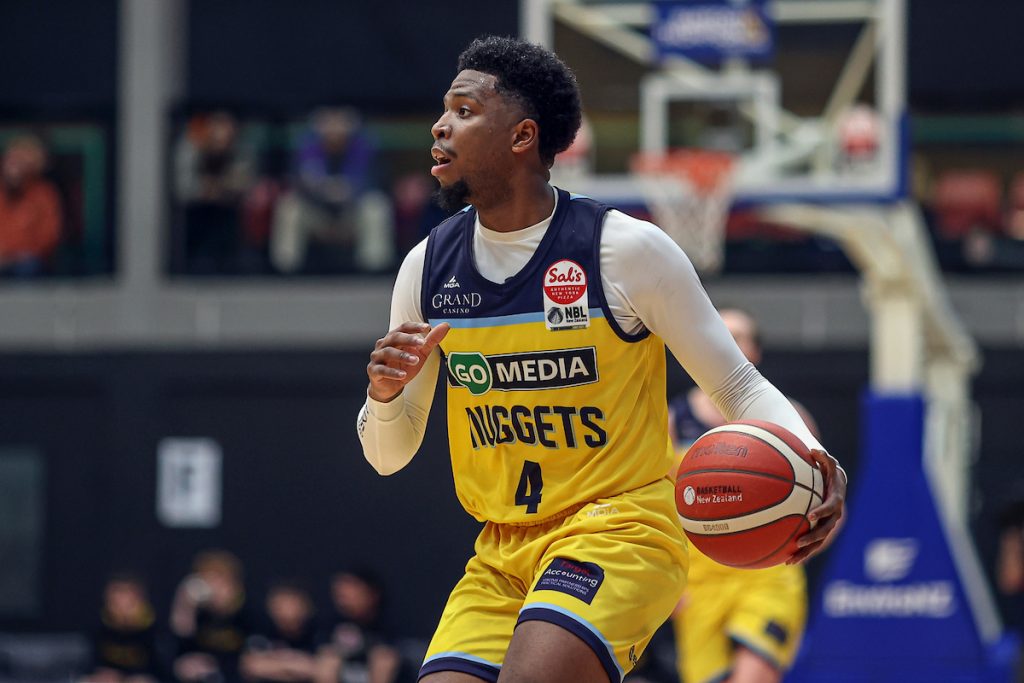 SATURDAY brought a couple of exciting match-ups in the New Zealand National Basketball League (NZNBL) as the Otago Nuggets and Franklin Bulls notched up wins. It was a close encounter in both matches as the two sides showcased their ability to fight back when down to clinch victory.

The fourth placed Nuggets showcased some real grit and determination against the third placed Hawks in what was an enthralling contest that saw them get over the line. Neither side was willing to give an inch as they engaged in a hard-fought battle filled with plenty of excitement and lead changes. It was level pegging to start the game with both the Nuggets and Hawks heading into quarter time on 11 points each. Thing started to open up in the second quarter as the Nuggets generated some real scoring momentum to create a 10-point buffer. But the Hawks found a way to stay in the hunt reducing the deficit to eight at the main break. Their high tempo continued into the third quarter draining the first six points thanks to back-to-back triples before rounding out the term in style with only one point separating the two sides. It was an action packed final quarter but it was the Nuggets that found their groove as the clock ticked down to steal the win.

Isaiah Moss was the most damaging player out on court for the Nuggets sinking 31 points and while he could have been more accurate from down town, still had an impact with his five triples from 10 attempts. It did not stop there for Moss as he walked away with three assists, nine rebounds and four steals. Gerasimos McKay was firing on all cylinders producing 17 points at 58 per cent from the field while also accumulating six assists, eight rebounds and two steals. Luke Aston and Samuel Timmins also featured highly for the Nuggets with 14 and 12 points respectively, with the latter also amassing six rebounds. Devondrick Walker caused all sorts of havoc for the Hawks piling on 23 points, five rebounds and two assists while Jordan Hunt was the next best for the Hawks with 14 points. Derone Raukawa showcased his class credit to his 13 points and five rebounds in 30 minutes of play while Hyrum Harris also got busy with 11 points at 42 per cent from the field.

Only two points separated the Bulls from the Mountainairs as Franklin just scraped over the line. Having already played on Friday night the Mountainairs looked slightly fatigued against a fit and firing Bulls side who did the job to create some more ladder separation. It was a heart in your mouth match as the two sides traded blows with the lead chopping and changing. Taranaki held the lead for a large chunk of the opening half in what was a high scoring affair. Up by 14 points at the main break it was time for Franklin to hit back and put some respectability back on the scoreboard and that they did. They steadily chipped away at the scoreboard as the lead went from 14 to nine and so forth. Although the Mountainairs still managed to find a way to score the Bulls continued to charge ahead. It all came to the final quarter with the Mountainairs staring down a potential second win of the season, but it was not to be as Franklin gelled together to pull off an almighty comeback.

Manel Ayol impressed with his ability to find the rim and apply scoreboard pressure for the Bulls as he piled on 31 points in 35 minutes out on court. He found his mojo off the boards too, with six rebounds and three steals in an all-round dominant performance. Jayeln Gerrand imposed himself for the Bulls with his 20 points at 44 per cent from the field plus his two rebounds as Denhym Brooke also chimed in with a handy double-double credit to his 17 points and 11 rebounds. Isaac Davidson and Jett Thompson did enough to get their side over the line producing 11 and 10 points respectively for the Bulls. When looking at the Airs it is once again hard to deny the influence of Marcel Jones who starred with his whopping 39 points at 57 per cent from the field. Jones also inflicted pain off the boards with his 15 rebounds, 12 of which were defensive. Tai Wynyard continued his form draining another 16 points and six rebounds as teammate Dru-Leo Leusogi-Ape was the next cab off the rank with his 15 points as his 100 per cent accuracy from beyond the arc took centre stage.