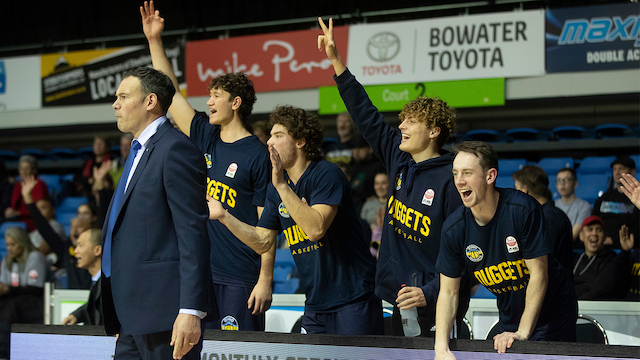 OTAGO Nuggets gave Auckland Huskies a taste of their own medicine with a huge first term to set up an impressive 109-83 victory to maintain top spot on the 2020 Sal’s National Basketball League (NBL) Showdown ladder. After a mammoth 45-point opening term in their last game, the Huskies were considered a danger early, so the Nuggets went to work from the first tip-off and came away with the win.

A few loose possessions started the match before a Reuben Fitzgerald three opened the scoring account, with Jarrod Kenny driving down low to lay it in making it a basket each.

The Huskies’ first quarter on Sunday set up their win with a prolifically efficient shooting performance. Because of this, the Nuggets knew they had to fire early, and they did, scoring seven three-pointers from ten attempts through the first 10 minutes of action. Auckland seemed to lack that flow offensively that they had in abundance on Sunday.

Kane Keil was at his best early on knocking down two of those seven shots from deep with Jordan Hunt, Josh Aitcheson and Kenny stepping in with triples of their own. The lead was suddenly at double digits, a lead the Nuggets held until the first break, but was also a lead that threatened to explode with Otago’s offensive efficiency and Auckland’s offensive deficiency (36 per cent shooting). Izayah Mauriohooho Le’Afa’s 12 first quarter points and Aaron Bailey-Nowell’s hustle on both ends kept the deficit at bay, while preventing its extension.

Some easy fixes for the Huskies on the offensive end seemed to be tweaked at the break as they come out on an 8-0 run to start thanks to five Tohi Smith-Milner points and a Jaylen Gerrand three. Having a chance to tie the game, an Isaac Miller-Jose offensive foul stopped the momentum, and Aitcheson free throws stopped the scoring run. Aitcheson would get to the line again and hit some corner threes as he was on his way to 18 first half points.

Despite Smith-Milner’s best efforts, a Matthew Bardsley layup gave Otago a double-digit lead again, another one they wouldn’t squander, but this time for the rest of the game.

Defying the Huskies low shooting percentage was Fitzgerald whose four makes from as many attempts helped him to 11 points, thriving in Taine Murray’s absence. Jordan Ngatai’s first points came with a minute and a half left in the second quarter as Aitcheson fittingly ended the half’s scoring. The Nuggets led 44-59 at the main break with many thanks to their 61 per cent shooting from beyond the arc and 17 assists from 21 makes on the floor.

Otago boasted many scorers but for the Huskies, it was Mauriohooho Le’Afa and Smith-Milner leading the way with 12 and 11 points, respectively. Leon Henry was down on his usual efforts with just two points until half time.

The second half begun the same way the first half ended with Aitcheson laying it in, setting the tone for another dominant Otago quarter with Kenny and Keil scoring from three-point territory early in the third. Not to be outdone, Mauriohooho Le’Afa replied after being held scoreless in the second quarter. More players stepped up for the Nuggets despite him to stretch the lead to 30 which they managed to hold on to for much of the game. The point of difference was Hunt whose three-pointer ended the third quarter in which he scored 14 points.

Auckland’s physicality picked up with their bench unit towards the end of the quarter which provided a positive to coach Kevin Braswell, but physicality is far less valuable than points on the board. They trailed 62-90 heading into the last break with the game all but over.

Both teams put their key players away after a couple of minutes of fourth quarter action, giving an opportunity for some bench players to stake their claim in the rotation as we approach the business end of the competition.

It was almost an end-to-end scrimmage as the Huskies won the quarter 21-19. Marvin Williams-Dunn took the opportunity to gain some confidence offensively as the Nuggets boasted 10 individual scorers on the night.

The final score was 109-83, an emphatic win to keep Otago at the top of the ladder with Manawatu.

The Nuggets shot 54 per cent from the floor including 57 per cent from deep with Hunt (31 points, five rebounds, six three-pointers) playing a big part in both percentages. Aitcheson (22 points, six rebounds) slowed down after half time while Kenny was named MVP with his 20 points, four rebounds and seven assists. The microwave Keil missed his first shot in the last quarter as he made his way to 16 points, while Ngatai was kept quiet while playing a role with two points, six assists, four steals and five turnovers.

The Huskies missed Murray’s offensive output tonight as the reliable Mauriohooho Le’Afa led the way with 17 points and four assists. Fitzgerald did his best to fill Murray’s shoes with 13 points on five for five shooting while Smith-Milner put up 13 points and five rebounds in just under 20 minutes of play. Bailey-Nowell (12 points, two steals) has proved a valuable addition to this Huskies line-up as Henry (four points, six rebounds) just couldn’t get it going.

Auckland will look to move on with a much better performance Wednesday night against the last-placed Canterbury Rams while Otago get ready for a mouth-watering top-of-the-table clash with the Manawatu Jets on Thursday night.