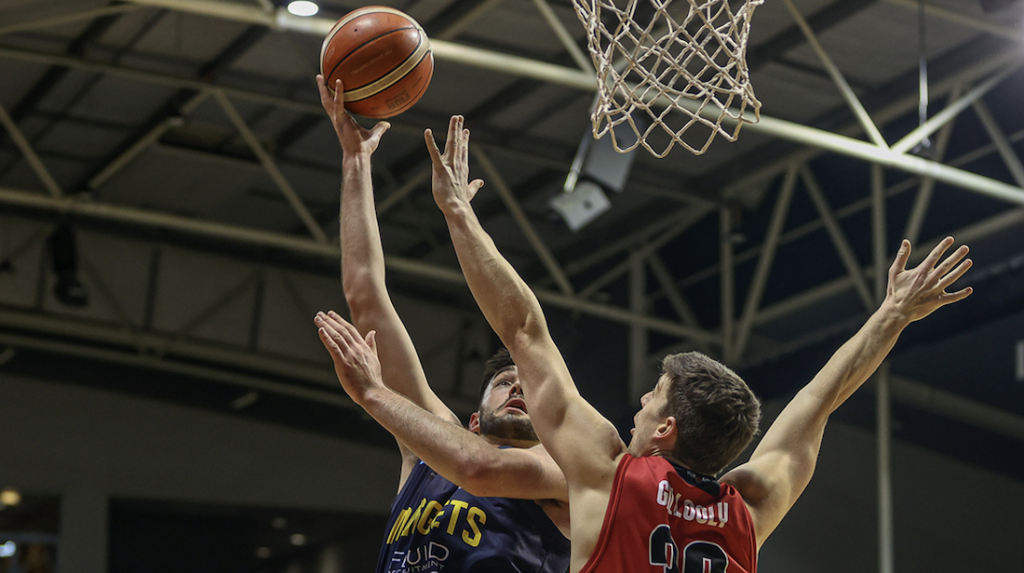 LIKE all great stories, there is eventually an ending. This was the case for the Canterbury Rams’ spectacular New Zealand National Basketball League (NZNBL) Finals Week run, as they fell to the minor premiers and championship favourites, the Otago Nuggets. In what was a clinic from the Nuggets’ marquee signings, Jordan Hunt in particular helped elevate his side to their Franchise’s first ever Grand Final appearance, after surgically defeating a fatigued Rams squad, 97-79.

Knowing full well that Canterbury was not fully rested, Hunt expressed post-game that it was a major point for him and his side to exploit. “We just wanted to come out strong,” said Hunt. “It was pretty tough on the Rams coming off of two previous games in two days, so we just tried to put the foot on early and keep it there.”

Having already pulled of remarkable upsets in their first and second elimination finals against the Nelson Giants and the Auckland Huskies, Canterbury’s biggest and most challenging opponent stood directly in front of them.

Pre-dating their third matchup, the Nuggets had emerged victorious over their South Island neighbours on both occasions. But, with both of those meetings being decided by 10 points or less, the Rams were not an immediate write-off before the opening tip. However, coming off a strong qualifying final triumph over the Manawatu Jets, it certainly seemed a ‘David vs Goliath-type’ line-up for the two sides and Otago was determined to win the franchise’s first NZNBL title.

Number one pick Jordan Ngatai kicked off the proceedings with an aggressive layup with his favoured left hand, while Joshua Aitcheson added to Nuggets confident start. Then 100 seconds in, an up-and-under layup by Rams’ captain Taylor Britt on Defensive Player of the Year Jarrod Kenny, got the second of the two teams up off the ground.

The ball started to find some range during the middle stages of the first quarter as both sides starting looking to the deep-ball, and at an efficient rate. A 35-second stretch saw back-to-back-to-back threes from Rams Toby Gillooly and Alexander Talma and Otago’s Kenny, highlighting the accurate shooting in the opening 10 minutes of play.

Keeping Mick Downer’s squad at arm’s length during the first term, a corner-three via Hunt extended Otago’s advantage to greater than two possessions, helping the Nugs to an advantageous 29-22 quarter-time lead. The Nuggets maintained 61 per cent shooting from the field off of 11 made attempts, nine of which were created through assists, as Hunt and Ngatai accumulated nine and eight points apiece amongst a fast-paced first term.

Another Kenny triple extended Otago’s lead to 10 points kicking off the second, but the Rams tried another approach of scoring, which came evident throughout the duration of the period. Going with a twin-tower formation between Talma and Thomas Webley, Canterbury hammered Otago’s frontcourt around the rim with close-range shots. But the Nuggets continued to capitalise on easy baskets, more times than not through dribble penetration and lacklustre help defence courtesy of the Rams.

Canterbury’s second half prospects of a comeback were hindered further, following a put back layup from Hunt. Otago held a handsome 54-39 half-time lead as a result of forcing numerous turnovers with Canterbury’s total at nine. Talma led his side in points at the main break, but with Hunt, Ngatai and Kenny each in double-digits at this stage, the Rams needed to pull a rabbit out of the hat if they were to claw their way back into the match.

With the Rams shooting 40 per cent leading into the third quarter, the red and black needed to hit their shots and quickly with time running out. But the second half started with defence for the Rams, as Reuben Te Rangi’s statement block on Ngatai set the tone for the next 10 minutes.

Even though both teams struggled to convert from the field, the Nuggets at least found some success on their shots, slowly but surely stringing together a 7-0 run to begin the second half and pushing their already commanding lead to 20 points. With the Rams desperately needing solutions, Brent Matehaere’s squad could smell blood and looked to their ball movement to deliver one last debilitating blow to a struggling Canterbury outfit.

As more of Otago’s bench players were getting some court time, fatigue became more and more of a factor in the later stages of the contest, as the Rams just could not keep up with the top-ranked seed in the League. And after Kane Keil’s reverse layup with 20 seconds remaining in the third, the 24-point lead (81-57) in favour of the Nuggets looked insurmountable for Canterbury, while Hunt continued his rampage, sitting pretty with 28 points through three phases.

Despite Canterbury’s roster depth and winning out in the bench points statistic, there was simply no answer for Otago’s marquee signings. This, coupled with the fact that the Rams were playing their third game in as many days, marked a battle that the underdogs just could not win.

One last charge for the Rams would ensue, off the back of Samuel Smith and Benjamin Carlile-Smith baskets, bringing the deficit to as little as 13 points. But following Darcy Knox’s layup and Ngatai’s three with a few seconds left, the Nuggets would cross the finish line cementing their place in the club’s first Final ever, knocking off the dark-horse Rams 97-79.

Otago’s 50 per cent shooting carried them for all four quarters as well as their 22 assists, capping off a well-rounded team effort on the night.

Leading them through the game, Hunt’s game-high 33 points and 10 rebounds earned him man of the match honours, as Ngatai and Kenny added 23 and 16 points each, as well as both of players doling out seven assists.

Sam Smith led the Rams in scoring with a flurry of late buckets, compiling a modest 13 points. Meanwhile, the duo of captain Britt and Webley combined for 24 points, whereas Te Rangi concluded his night with 10, alongside three rebounds and three assists.

The Rams’ Cinderella story came to an unfortunate ending last night after surprising most pundits to this point, but the Nuggets were plainly the more superior side over four quarters and can now look forward to their first ever grand final appearance on Saturday since their inception in 1990 when they face the Jets.